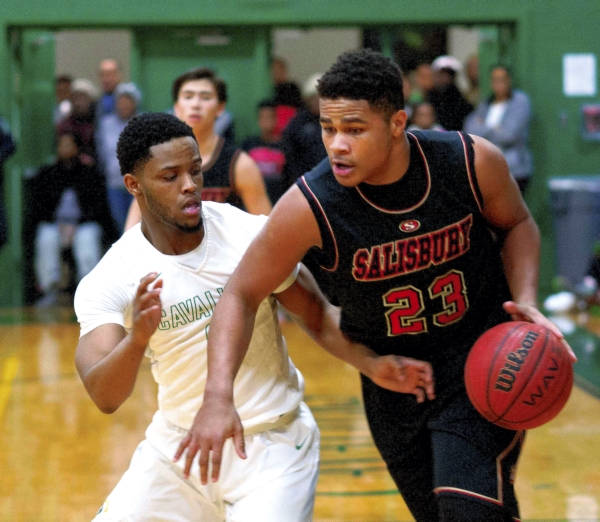 SALISBURY — For three quarters Wednesday night, the Salisbury boys basketball team looked like a heavyweight about to hit the canvas.

But instead of going down, the Hornets resurrected themselves in the fourth period, used a 16-2 finishing kick and swept past visiting Thomasville, 81-70.

“Every win we’ve had is come-from-behind like this,” senior D.J. Alexander said after Salisbury (15-3, 4-1 CCC) staged a pulsating, late-game rally. “I think we just like the challenge of having to play harder.”

Winning coach Bryan Withers was all smiles after the Hornets — shorthanded by injuries and six days away from the court — rallied from a 12-point, second-quarter deficit.

“We seem to hang around and hang around,” he said. “And now these guys just don’t believe that they’re going to lose, so they keep playing.

“But,” he added with a raised index finger, “good teams don’t do that. That’s where we have to grow.”

The Hornets must have hit a growth spurt in the fourth quarter. They trailed, 62-56, entering the final period and quickly caught fire.

“When we were down, we didn’t start pouting and blaming the refs for anything,” junior Will Leckonby said. “We let our fans pull us back into the game.”

The comeback was launched by 6-foot-5 junior Tre Oats, who finished with 16 points and four blocked shots. His three-point play opened the fourth quarter, trimmed the deficit to three and may have rattled the visiting Bulldogs (9-7, 2-3).

“He played so well,” Withers said. “And he’s injured. That’s why he didn’t play against North (last Thursday). But Tre proved a lot to me tonight. I didn’t know how tough he was until he tried to play injured. That tells you a lot about a kid. As coaches, we’re looking at him in a totally different way.”

It was Alexander (18 points, 12 rebounds) who stole the fourth-quarter spotlight when he grabbed an offensive rebound, hit a put-back and was hacked by Thomasville’s Rajast Mouzone. It gave him 1,000 career points, so the game was stopped for a moment of recognition.

Withers couldn’t help but gush over his 6-3 power forward. “D.J. does a lot for us,” he said. “Sometimes I think he steps back and allows too many other things to happen. But D.J. is hard to guard on that block. When he gets his hands on the ball, he’s tough to stop.”

Alexander’s ensuing free throw tied the score 68-68, midway through the fourth quarter and set the stage for another round of Salisbury’s late-game magic. Thomasville managed only two baskets in the final four minutes and fell behind for good when Leckonby threaded a fadeaway 3-pointer from the left side with 2:35 remaining.

“I hadn’t been making that one all night,” Leckonby said after contributing 13 points — all in the second half. “But I got a great pass from Uriah (Kennedy) and knocked it down. It came right after D.J.’s free throw and just steamrolled us to the finish line.”

Down the stretch, there was a layup by Oats, a nifty basket by Kennedy — who had seven fourth-quarter assists — and a last-minute, uncontested bucket by Jaquan Davis.

“We can make shots,” Withers said. “And I’ve got a ton of people who can play. Different nights it’s going to be different people. We just have to learn to accept that.”

Staff report SALISBURY — Livingstone jumped on St. Augustine’s, winless in the CIAA, early and romped to a 104-58 victory... read more