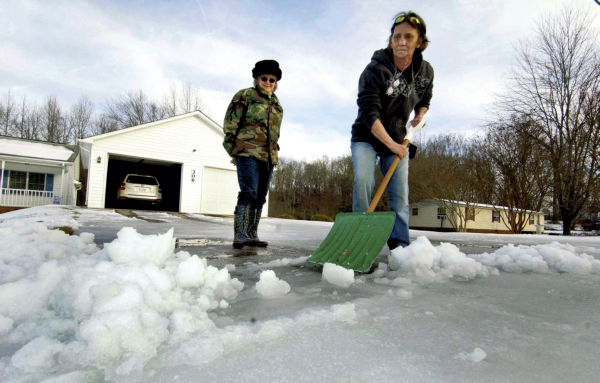 Elaine Hewitt and neighbor Sonia Roberts take turns scraping the residual snow from Hewitt’s driveway in Cleveland on Monday afternoon. Life slowly returns to normal in and around Salisbury and Rowan County as the first real snowfall of winter melts and drains off. Jon C. Lakey/Salisbury Post

The big thaw came in Monday, helping to clear streets and sidewalks and allowing many people to return to their routines.

But Rowan-Salisbury Schools will be closed again Tuesday. Staff will be on a three-hour delay. All activities are canceled. It’s an optional workday for 10-month staff.

Kannapolis City Schools will also be closed. It will be an optional work day for staff with a two-hour delay. The make-up day will be Tuesday, May 3.

Steve Monday of Rowan County Weather was planning to go home and get some sleep Monday night, because he thinks Rowan will return to normal winter weather.

“The next issue to deal with is rain” Tuesday, he said. “We’ll have that Wednesday and Thursday, then clear out Thursday night and Friday.”

The National Weather Service says’s there’s a 40 percent chance of snow Wednesday night into Thursday, but Monday says he doesn’t really see that. The rain will help melt the snow and clear the roads.

One model he’s looked at has a very small chance of freezing rain Thursday night, but he discounts that. “I really don’t even want to mention it.”

Crews with the N.C. Department of Transportation and city of Salisbury are still at work trying to reach neighborhoods and shady areas that haven’t seen much melting.

Kevin Neal, with the local DOT, said the main problem was that the storm went on for so long. “I think it was about 32 hours that we had something coming down. That gave us issues, it was more difficult.”

Today, Neal said, the DOT is trying to get to some back roads, going into some subdivisions. “Some of these roads with the rough pavement have made it harder to scrape,” he said, but he’s counting on warm temperatures and sunshine to do a lot of the work.

Craig Powers, who works in Salisbury’s streets division, said, “The roads were as bad as I’ve ever seen them. … We treated areas the best we could, now we’re happy to see Mr. sunshine come out.”

Both Neal and Powers said things went as well as they could have. And both were happy not to see much freezing rain.

Neal warned that some areas would refreeze overnight, especially if the lows dip into the 20s, but warm temperatures Tuesday and a chance of rain will help.

Crews worked long hours, but got breaks during the night when there was not much they could do with the freezing conditions. “You can’t peel ice off the roads.” Some people have been on duty since midnight Thursday with a little time to rest Saturday night. “Most of them are going home at night, but we’re ready to respond as we need to.”

Powers’ crews worked long hours, as well, working 24-hour shifts. They geared back some on Sunday. Like Neal, the city crews saw plenty of wrecks and people being stuck. “I think people got antsy and they ran into icy intersections.”

Powers hoped the city could get most of the snow pushed to the side of roads by the end of the day Monday. Other areas, next to buildings that don’t get much sun, they will continue to salt and sand where possible.

“We’re monitoring another siutation that may come later this week. We’ll be ready if need be.”

Salisbury Post newspaper carriers are doing their best to get the newspapers delivered, but have had some trouble with icy roads.

The storm disrupted garbage pickup in some towns, like Kannapolis, where collection was to begin again today. Many routes were on a one-day delay.

The Hefner VA Medical Center, which had to cancel outpatient clinics on Friday and Saturday, is back to a regular schedule. Marlous Black, the public affairs officer, said staff started calling people who had appointments on Thursday to reschedule. The clinics in Charlotte and Winston-Salem were also closed. “We want to make sure everyone has access to care,” Black said.

Something warm for a cold winter night