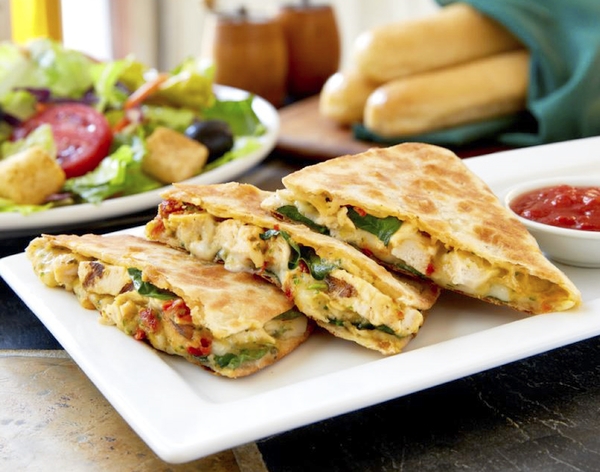 The Grilled Chicken Piadina and the Grilled Vegetable Piadina feature a rich, buttery piadina filled with Italian cheeses, fresh spinach and your choice of grilled chicken or vegetables, says the press release.

But what is a piadina? It’s a thin, Italian flatbread, often cooked on a griddle.

Olive Garden is offering catering delivery at all restaurants in North America now. The minimum order is $125, so it’s for large family gatherings, office parties and more.

According to the food writers at the New York Times, Mississippi Roast is the hottest new comfort food. Their version uses all fresh ingredients, but the orginal consists of a chuck roast, a stick of butter, a package of ranch dressing mix and one of au jus gravy mix, along with pepperoncini —- the pickled peppers often served with a Greek salad.

When it’s all done, it pulls apart and can be served over noodles or rice or as the filling for sandwiches. It’s reminiscent of a Pioneer Woman recipe for drip beef, which uses beef broth, Italian seasonings or a packet of Italian dressing mix, and the pepperoncini.

Either way, it’s easy to throw into the slow cooker for a tangy beef meal.

Let’s face it: Fitness trackers are great for counting steps and tracking exercise. But wouldn’t it be nice if your wearable or mobile app could calculate calories, too?

A Seattle-based company is pushing NutriRay3D—a smartphone accessory that scans meals and provides nutritional facts. But it needs your help — and $50,000.

Hoping to catch those folks still in the swing of their New Year’s diet resolutions, NutriRay is available now to early bird buyers for only $199. When that option sells out, you can get it for $224 — it will be $299 at launch.

We needed a study for this?

Critics have attacked chain restaurants for years, complaining about high-fat, high-calorie meals turning America into a nation of artery-clogged fatties. But a new study has found that local mom-and-pop restaurants aren’t much better.

In 123 restaurants in Boston, Little Rock, Ark., and San Francisco, the research team found that a single meal serving, without beverages, appetizers or desserts sometimes exceeded the caloric requirements for an entire day.

The study was conducted by Tufts University researchers who analyzed the calorie content of frequently ordered meals in both local restaurants and their large-chain equivalents in three separate locations.

The study, which appears in the Journal of the American Academy of Nutrition and Dietitics, also found that American, Chinese and Italian had the highest calorie counts with a mean of 1,495 calories per meal.