For almost a century, Chamber of Commerce has made itself part of the Rowan story 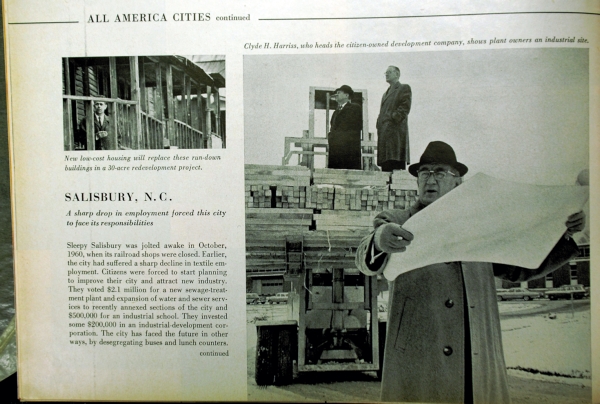 Mark Wineka/Salisbury Post Look magazine's April 10, 1962, included the cities in the United States that were named All America Cities for that year, including Salisbury. The Rowan County Chamber of Commerce led the effort in submitting Salisbury's nomination.

SALISBURY — Name pretty much any major activity or development in Salisbury and Rowan County over the past 90-plus years, and the Chamber of Commerce seems to have its fingerprints all over it.

When you take it collectively, it’s an impressive history but not that surprising, given what local Chambers of Commerce have accomplished since Revolutionary War days.

According to Chris Mead’s book, “The Magicians of Main Street — America and Its Chambers of Commerce, 1768-1945, it was the Atlantic City, N.J., chamber which created the Miss America Pageant, the chamber in St. Louis that helped to pay for Charles Lindbergh’s cross-Atlantic flight, and it was the chamber in Chicago that collected the financial information leading to the arrest of gangster Al Capone on tax evasion charges.

The history of the Rowan County Chamber of Commerce — and its men and women leaders — is almost inseparable from the county’s story as a whole over the past century.

Though chamber members will hold their 90th Annual “Gala” meeting Thursday evening at the Depot, the roots of the organization might reach back as far as 1889. The first recorded attempt to set up an organization for businesses or merchants came about 1889 when Theo F. Kluttz formed a Chamber of Commerce of sorts in the YMCA Hall over C.F. Baker’s tinware shop on South Main Street.

Those attending the first meeting selected Kluttz as their president and William Smithdeal, who had a hardware store, as vice president.

According to one history, this group did not stay organized long, maybe into the early 1900s. Other organizations would follow, the more notable perhaps being the Central Land Co. and, by 1913, the Salisbury Industrial Club.

The latter organization merged in 1915 with the Merchants Association and became known as the Salisbury Chamber of Commerce, though it was quite unofficial. By October 1923, interested businessmen met in the office of the Post Publishing Co. to outline a needed reorganization plan for this “chamber.”

They formed teams and canvassed businesses in Salisbury to determine if they would become members in a new organization, which had an initial goal of 50 members at $100 each.

In less than a week a general public meeting was held, and by November officers were elected for the new group, including Sam Carter of Carter and Trotter Drug Co. as president.

By Jan. 8, 1924, L.S. Moody was chosen as the chamber’s first paid executive secretary. The Salisbury Chamber of Commerce wasn’t officially chartered until Feb. 19, 1925, and the new chamber held its first annual meeting March 19, 1925.

In 1925, Carter, the chamber president, offered some words to his directors that proved prophetic and even a guiding principle for the Chamber’s work in years to come:

“The South is on the threshold of a great era of prosperity,” Carter said, and Salisbury must quicken her steps in advance of other cities if she attains and holds the position she deserves.

“Therefore, it is up to us to turn our faces forward with determination that we, as members of the Salisbury Chamber of Commerce, will play our parts individually, collectively more intelligently, more wholesomely and in a better spirit of cooperation than has ever been done before in the history of Salisbury.”

In its early days, the Chamber raised funds to support Catawba College’s move to Salisbury. It lobbied for paved city streets and endorsed a $300,000 bond toward that cause. It worked for the establishment of a creamery to help dairy farmers in the county.

It was a chamber initiative for a West Innes Street underpass at the railroad tracks. It pushed for Salisbury to have a professional baseball team, and it endorsed the change in city government from a mayor-aldermen model to the city manager form.

The chamber supported the location of Buck Steam plant along the Yadkin River in 1926 and joined the U.S. Chamber of Commerce in 1927. The organization was behind the building of a city armory in 1934 and City Park in 1935.

The Chamber raised considerable funds in 1934 and 1936 for the then new Rowan Memorial Hospital. In 1949, it was a chamber committee headed by J.F.Hurley Jr. that played the most significant role in securing the VA hospital for Salisbury.

There were some misses in the chamber’s early history, but not for the lack of trying.

The chamber attempted, but failed in wooing companies such as Pullman (railcars), Southern Railway and, interestingly, the U.S. Air Force Academy.

In 1950, the chamber’s Industrial Committee submitted a proposal to the U.S. government to put the site for the U.S. Air Force Academy in Rowan County. It was a $150 million project at the time which required a 9,000-acre tract — land suited to both a campus and 10,000-foot runways.

The Air Force Academy ended up in Colorado Springs, Colo.

Well into the 1980s, until a separate Salisbury-Rowan Economic Development Commission was formed, the Rowan County Chamber of Commerce served as the country’s chief industrial recruiter.

For example, the goal of the chamber’s economic expansion committee in 1975 was “to seek diversified industries for our county that would complement our labor supply and to assist our present industries in continuing their planned growth.”

You name it, the chamber has seemed to be involved, with a program of work that has touched agriculture, economic development, education, state and local affairs, congressional actions, downtown revitalization, the arts, and transportation.

The chamber often has been a sponsor of political forums and routinely found itself taking stands on local and statewide bond issues.

The chamber became synonymous at times with Rowan County farm tours and “think session” annual retreats to Myrtle Beach. In years past, members supported things such as the continuance of passenger train service through Salisbury, protection of the Yadkin River, the upkeep of downtown Christmas lights, creation of a farmers market, the annual sale of dogwood trees, overseeing the National Sportscasters and Sportswriters Association banquet and yearly trips to Washington, D.C., for members.

Only recently, the chamber lobbied for the new Yadkin River bridge over I-85, the Salisbury One Stop Shop for planning and permitting, I-85 improvements and utility extensions, a new southern Rowan I-85 exit and expansion of the Rowan County Airport.

Its Leadership Rowan program continues to be popular for a chamber that has an annual budget of about $600,000 and a stable membership of roughly 850.

Three different office locations have been most associated with the chamber during its history. They include the Community Building on North Main Street (now Rowan Museum); the former Chamber building at 620 W. Innes St., which was dedicated in 1966; and today’s Gateway building on East Innes Street.

Men dominated the leadership of the chamber in both chairmen of the board and executive secretaries (today’s presidents). It wasn’t until 2004 that Dianne Greene of Century 21-Towne & Country became the first woman chairperson.