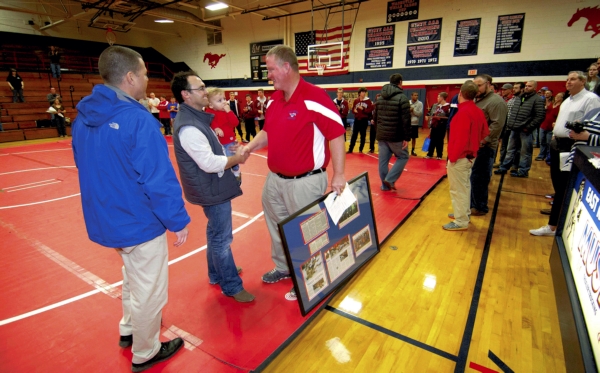 JON C. LAKEY / SALISBURY POST ... Barry Justus (right) shakes hands with Garry Eller as a long line of former wrestlers came to wish Justus well on Thursday night, prior to East Rowan’s home wrestling match with Concord. Justus, the Mustangs’ long-time wrestling coach, was surprised at his team’s senior night match with a celebration of his final season as coach. Justus plans to retire this year.

He tried this once before, after the 2003 wrestling season, but was lured out of premature retirement as East Rowan’s coach that winter. This time, he’s taking a knee and says it’s for good.

“It’s refreshing to know it’s coming to an end on a positive note,” he said with a boyish chuckle Thursday night, just moments after East toppled Concord in its final home match of the season. “But this is what I’ve tried to do from the start — to be there for these kids and lead them in a positive direction.”

For 26 years, Justus has done just that. Through each cascading season, he’s been the maestro of St. Luke’s Church Road, sustaining tempo and regulating rhythm while his teams serenaded from the mats. There were five conference championships, three 20-win seasons and six Rowan County Tournament titles. Eight of his wrestlers wore state champion ribbons, another 12 were runners-up and a total of 38 were state place-winners.

“He’s had a Hall of Fame career,” said Tim Pittman, a 1997 graduate and one of 20 former East wrestlers on hand for the festive send-off. “He’s got nothing left to prove to anybody.”

It wasn’t always that way. Justus, now 54, was an assistant coach at Erwin Middle School for three years before landing the varsity job across the street in the fall of 1989.

“They were looking for someone,” he recalled. “Jerry Mills was asked. Greg Lowe was asked. And I’m over there jumping up and down going, ‘Me, me, me, me.'”

It was principal Dr. Harry Starr who eventually took a chance on Justus. “He finally said, ‘I want to give that wet-behind-the-ears kid a shot,'” Justus said. “And he did. I remember saying I wanted to take the wrestling program to another level and try to keep it there.”

It must have been the phrase that pays because Justus found himself a home at East. Bobby Hedenskog, a ’92 grad and 135-pound state champion, fondly remembers those ground-breaking years.

“Ah, the coach he was then…,” Hedenskog said. “He was  young coach, learning as he went along, but an extremely good, aggressive coach. He coached like a seasoned, veteran coach. At least that’s what it felt like to us.”

Here’s the thing about Justus — and this has been true from the beginning. His wrestlers have always thought of him as more than just a coach, more than just the guy you had to impress to earn a spot in the lineup. Listen to Lonnie Hinceman, a second-place finisher in the 1992 state meet:

“He was always looking over and beyond, watching out for his kids, and not just during the wrestling season,” he said. “It was sort of like having a second dad. You’d go to him and he’d have an open ear. He’d break it down and explain things in a way that your parents didn’t.”

Hedenskog can relate to that. He remembers Justus as a “father figure” and “big brother” during those formative years. “It’s like he was guiding us, putting us on the right path with both academics and athletics.”

Not only that, Justus did it with a coach’s version of bedside manner — he put you at ease.

“He never cursed, and you don’t see a lot of coaches like that,” said Garry Eller, a ’93 alum. “He has a gentle way of pushing people to do better. I called him the ‘Gentle Persuader’ because that’s what he did and still does. He found a way to make you want to push yourself a little harder. He basically laid things out and you wanted to do it. If you didn’t you felt like you were only hurting yourself.”

Pittman, who went on to coach at North Rowan and currently at Salisbury, offered a you-are-there anecdote.

“It was my first year wrestling, seventh grade at Erwin,” he said. “I never won a match. But after the season he came to me and told me about his club, Eastern Rowan Wrestling, and he asked me to come out. I thought, ‘Hey, the high school coach wants me to be part of something. Cool.’

“Well, I went out and lost my first match for him,” Pittman continued. “He came up to me and said, ‘Do you have your pink panties on today?’ I looked up at this big, big man and I’m like 90 pounds, and I said, ‘No sir.’ He told me to go back to the locker room, put on my black Levis and come out and win the next match. I didn’t even know Levis made underwear, but I started winning.”

It’s evident Justus has touched many lives, both as a coach and a teacher. Along the way he and his wife Frances have enjoyed 28 years of marriage and reared two children. Mrs. Justus was asked what her husband is like away from clamor in the gymnasium. Her response? If he’s missed anything along this journey, it isn’t a chance to laugh.

“He is what he is,” she said. “It’s hard to make him mad. Sometimes at home he becomes different characters — Flip Wilson, George Jefferson. At school, if they put him on the intercom, he turns into Ric Flair. That’s Barry. A solid storm. A quiet, humble man who never raises his voice.”

All of which makes it harder to bid him farewell. Justus will retire from teaching on April 29 and likely hand the keys to the wrestling program to 2008 graduate Chase Burris. He also hints he may serve as an assistant coach “somewhere” next winter.

“Coach always told me I was his retirement plan,” Burris said. “We’ve been working on this for years. I’ve had other offers, but you wouldn’t walk away from that kind of promise. He’s a man of his word and he’ll always have your back.”

Justus says he won’t miss the endless stream of paperwork that goes with being a teacher, but he will miss the candy-colored scrapbook of people, places and things that he’s encountered along his 26-year magical history tour.

“That total, personal connection you have building a wrestler,” he said. “That’s the hard part. That’s what I’ll miss. But I’m ready to step back and do that.”

And this time you have his word.