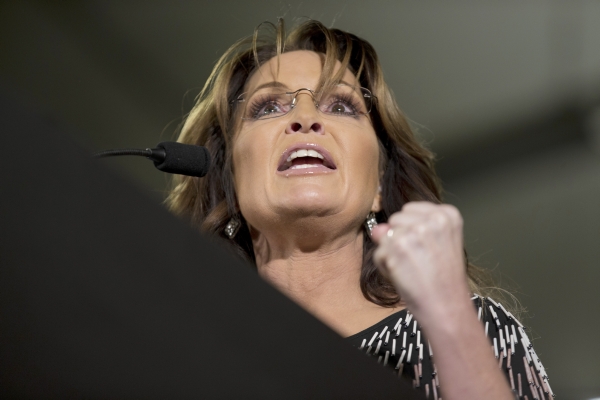 Where have you gone, Sarah Palin?

The Sarah Palin I knew in 2008 — the one who campaigned tirelessly and many times thanklessly for John McCain, a war veteran Trump has openly mocked — would have seen through Trump’s charlatan candidacy. The Sarah Palin I knew in 2008, a devout Christian whose faith was constantly scrutinized by the secular left, would have no affection for a man who is constantly scrutinizing the devout Christian faiths of other conservative candidates.

The Sarah Palin I knew in 2008, who was a passionate and fearless voice for hockey moms, mama grizzlies and women everywhere, all while enduring patently sexist attacks from the left, wouldn’t have supported a man who calls other women bimbos and slobs, thinks women who breast-feed and go to the bathroom are “disgusting,” and criticizes another candidate for her looks.

That Sarah Palin is gone. Maybe one day, over a beer, she’ll tell me why.

But there is some biography behind this pairing, as the Washington Post notes. Trump endorsed Palin in 2008. Palin endorsed Trump’s crusade to see Obama’s birth certificate. The two had pizza in 2011. Last year, the former Alaska governor appeared on Saturday Night Live to make some gags about a Trump/Palin ticket. “Sarah, you’re teasing us,” said Jerry Seinfeld, “That’s not nice.”

The idea would be enough to make some people leave the country — and Trump/Palin would doubtless consider that a victory. Aside from being outspoken, unapologetic citizen politicians who have never backed down from a position — no matter how appalling or inaccurate — you sense they share a delight in offending the politically correct. They probably read articles like this one and enjoy it enormously.

Moreover, they fuse those two things that Americans love the most: God and money. The Bible was wrong: Sarah and Donald prove that you can serve both.

Anyway: the real question isn’t over why Donald Trump is, uh, trumpeting his coveted Palin endorsement – they clearly speak the same language of bombast and Big Gulp to an audience hungry for big government jibes …

The question isn’t even: is this a liberal’s ostensible nightmare scenario? Because it kind of is, but we’re still talking about the former governor of Alaska here, and it’s not like she’s going to be his running mate, really. Plus: wouldn’t liberals kind of secretly LOVE it if Palin ran? Wouldn’t Hillary Clinton’s entire campaign team, which could take off the next 292 days?

The real question before the dynamic duo even took the stage was: who does Palin bring in to Camp Trump that he doesn’t already have? Palin, even for many conservatives, represents show(wo)manship over substance – and she isn’t exactly respected on her policy merits.