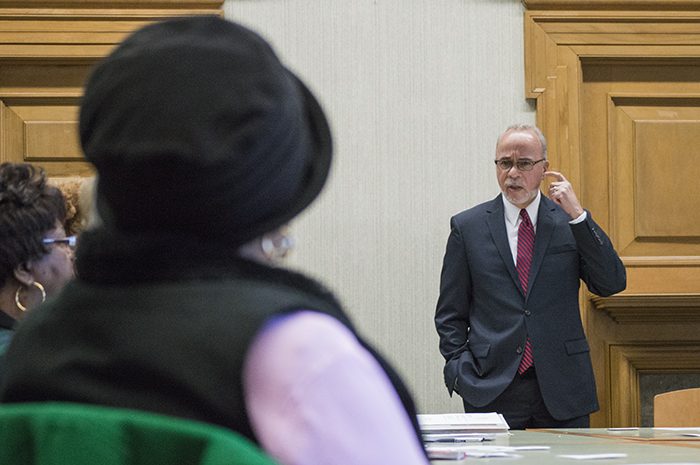 Editor’s note: This article has been updated with a response from the Cooper campaign.

Spaulding, also running for governor as a Democrat, called Cooper a “Republican-Democrat” during a fiery speech to the Rowan Senior Democrats. Starting with teacher tenure, Spaulding accused Cooper of fighting for Republican interests in court.

“He’s been around Republicans for too long,” Spaulding said. “Roy Cooper has been with Republicans, in court and through his office, defending the Republicans in regards to taking away our teachers’ tenure. Then, he has gone into court, through his office, against the NAACP, the League of Women Voters, the United States Department of Justice Civil Rights Division in regard to protecting our voting rights. He’s been on the side of Republicans.”

During the speech, Spaulding, 71, interspersed his opinions on significant policy discussions — he’s opposed to fracking in the state, opposed to private school vouchers and in favor of expanding Medicaid — but focused on questioning Cooper’s record. Spaulding said there’s no merit to the idea that Cooper was forced to defend Republican interests as part of his job as attorney general. As a piece of evidence to back up his claim, Spaulding referenced Cooper’s pre-trial brief in North Carolina’s voting rights lawsuit — NAACP vs McCrory. The brief accused plaintiffs of arguing for “the equivalent of election law affirmative action” or for “practices that are favored by political organizations dedicated to maximizing Democratic turnout.”

“Voting rights are constitutional rights and don’t equate them with affirmative action,” Spaulding said, referencing the voting rights suit. “These are rights that are established by the United States Constitution. … I’m gonna run across, and move across and go across this state telling people the truth of the matter.”

In response to Spaulding’s speech, the Cooper campaign on Wednesday released a statement clarifying Cooper’s role as attorney general and his stance on voting rights.

“It is the duty under the law for the attorney general’s office to defend the state and state agencies when they get sued,” said Cooper campaign spokesman Jamal Little in an emailed statement. “Roy Cooper strongly opposes these new voting laws and he will work now and as Governor to make it easier for people to register and vote.”

Spaulding said he’s running to be a voice of the people and challenge the establishment wing of the North Carolina Democratic Party.

“Now, it’s okay. They can go over in Raleigh in their room and make decisions for the rest of us, even those over here in Rowan County,” he said. “That’s fine, but I’m challenging that. And, I think it’s important to challenge that.”

“Business as usual” in the Democratic Party resulted in complete Republican control of North Carolina’s government, according to Spaulding. North Carolina has two Republican U.S. Senators, majority Republican representation in the U.S. House, a Republican governor, Republican lieutenant governor and Republican majorities in both houses of the General Assembly.

“You keep going over and over and doing things the same way, but maybe the people want something different,” he said. “The politicians, oh, they’re sitting over there continuing their careers, getting in the newspaper, getting their taxpayer money, but who’s getting caught in the middle? It’s us, the people.”

Spaulding said North Carolina’s schools are hurting and job growth remains below expectations. The state’s leaders, he said, must find ways to add jobs in rural parts of the county, not just metropolitan areas. Politicians are too focused on advancing their own careers, he said.

“That’s what these politicians are all about. It’s about their careers — moving a step up from attorney general to governor,” he said. “That’s their career, but I’m talking about the careers and opportunities for others across this state. The politicians are going to tell you, but I like to listen and learn.”

In his campaign for governor, Spaulding says he’s spent time in counties with significant demographic differences. Some are majority Republican or have relatively few residents.