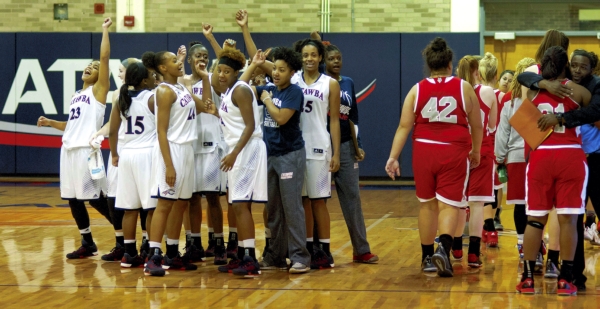 SALISBURY — Coach Angie Morton knew this assignment was no easy ‘A’ — and it wasn’t.

But she had to give the Catawba women’s basketball team a solid ‘B’ for its performance in Wednesday’s 62-55, South Atlantic Conference victory against second-place Newberry.

“We beat a team that’s lost to only two others in our league,” Morton said at Goodman Gym, where the Indians (8-9, 5-6) won for the fourth time in six games this month. “They’re up at the top. That should tell our girls something. That’s where we could be.”

Catawba rebounded from Saturday’s soul-crushing loss to Lincoln Memorial with a display that was more gritty than pretty. It shot a pedestrian 35.8 percent from the field, was out-rebounded, 43-41, and went more than four minutes without scoring in the third quarter. Yet it compensated with sturdy defense and a desire to snap a three-game losing streak against Newberry (9-8, 8-3).

“This was a big game for us,” sophomore Terri Rogers said. “We knew it wasn’t going to be easy and it wasn’t. Sometimes we make it harder on ourselves by doing dumb stuff. But it always gets easier when you play smart and talk to each other.”

Rogers had an interesting night. She poured in a game-high 18 points, corralled 11 rebounds (seven offensive) and was a factor wherever she went. “But she could have scored 30,” Morton said after Rogers shot 8-for-20 from the field and missed a number of makable layups. “I think she just gets in too big of a hurry. I think she’s trying to make a move she doesn’t need to make. She can just drop, step and score.”

In Rogers’ defense, she was being guarded by 6-foot-2 Newberry freshman Meg Essex, whose long, elastic arms disrupted many opportunities. “I was rushing when I should have been taking my time,” Rogers said.

Eighth-year Newberry coach Sean Page said the Wolves “had nobody who could guard her.” He explained that Essex, one of eight Australian natives on Newberry’s roster, was playing in just her 17th college game.

The match seemed to turn in the second quarter, when Catawba used a 14-0 scoring run and mounted a 30-18 lead on Jada Huntley’s free throw with 2:46 remaining in the half. “We did a lot of things right in the second (quarter),” Huntley said after contributing 16 points and seven rebounds off the bench. “Talking, playing defense, playing hard. Then in the third we relaxed because we were up by so much.”

The Indians led by as much as 41-26 when Rogers scored on a set shot early in the third period. Newberry responded with a ferocious charge, inching within 43-42 on a couple of Emily Perry free throws that capped a 16-2 spurt.

“As a team, we seem to struggle in the third quarter,” Rogers said. “This has happened before.”

But when push came to shove, Catawba maintained its poise and held off the surging Wolves. Huntley had seven fourth-quarter points and teammate Serena Brown hit a clutch 3-pointer from the left side that provided a 57-50 lead with three minutes to play.

“It’s not a surprise to come in here and have a tough game,” said Newberry leading scorer Samantha Creed. “Obviously, we didn’t play our best, but in a few weeks we’ll be a lot better. We got out-hustled. Catawba didn’t necessarily want it more, they just looked and played like it.”

Perhaps an even better compliment came from Page. “I’d be very surprised if Catawba doesn’t finish in the top four (in the conference),” he said. “They’re that good.”

NOTES: Catawba, which had only five turnovers, visits Tusculum on Saturday and returns home Jan. 30 against Mars Hill. … Bri Johnson had a sub-par shooting night but totaled eight points and six assists. … Newberry averaged 70.6 points-per-game in its first 10 league games, but shot only 30.2 percent (16-for-53) from the field.