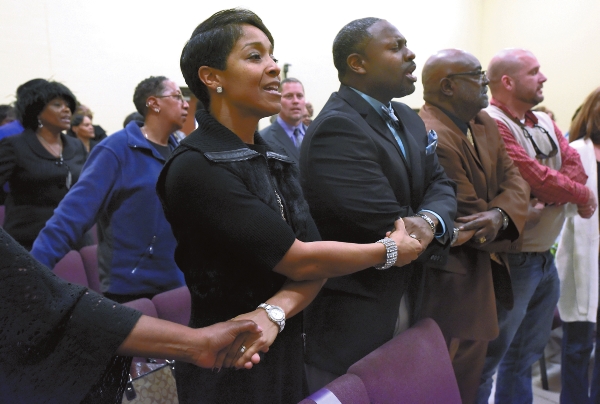 At the end of the service at the Humanitarian Awards at Mount Zion Missionary Baptist Church, the congregation joined hand for the singing of "We Shall Overcome." photo by Wayne Hinshaw, for the Salisbury Post

Keep working toward achieving Dr. King’s dream — that was the sentiment expressed by almost everyone at the 39th Annual Reverend Dr. Martin Luther King Jr. Birthday Celebration and Humanitarian Awards Day on Sunday.

Each of the officials gave one minute greetings to the event attendees, who filled almost every seat in the church.

Raven Weathers, Student Government Association president for Livingstone College, is a senior with a major in business administration.

Weathers used inspirational quotes from the Bible, songs and Dr. King himself to encourage the crowd to keep Dr. King’s dream alive.

“The next generation will continue to dream because of each and every one of you and your perseverance,” she said.

Justin Burroughs, Student Government Association president for Catawba College, is a senior with a major in chemistry.

Burroughs talked about a lesson he learned from one of his classes.

“Time is a limited resource … We don’t know how much time we have left so we have to seize the opportunities that we have today, just like Dr. Martin Luther King did,” he said.

The Humanitarian Service Awards were presented after the speakers.

The men of Man Up Monday were awarded for their work with at-risk youth in the school system.

“This (work) would be, I think, a fulfillment of Dr. King’s dream in bringing liberty, freedom, justice, humanity, unity to everyone,” Vincent Jones, Man Up Monday member, said.

Thomas O’Kelly was awarded for his work in the community, including being a leader for the North Rowan football team.

“(Dr. King) stood for injustice and what I want to do is make sure I continue that on in the way that I do it,” he said.

Alisha Byrd and Alex Clark were awarded for their youth empowerment programs.

“Being able to provide a safe haven for our youth is very important. It’s imperative that we do that as a community, so just being able to be singled out for that is a major accomplishment,” Byrd said.

Thurston Alexander, a student at the University of North Carolina at Charlotte, was also honored with the S.R., Jr. and Eva H. Johnson Memorial Scholarship.

Alexander said it was an honor to receive a scholarship from a church he grew up in.

“It’s great because it exemplifies what this church stands for and what Dr. King wants in life,” he said.

There was also a performance by the ABC Mime Ministry of Mount Zion and selections from the Kingdom Builders Voices of Praise choir.

Reverend Nilous Avery, who presided over the event, said as long as God was in their corner, everyone could carry on with the work that had to be done.

Gun violence: From problems to solutions

By Shavonne Walker shavonne.walker@salisburypost.com Six — that’s the number of shootings in September that triggered a partnership between the Salisbury... read more