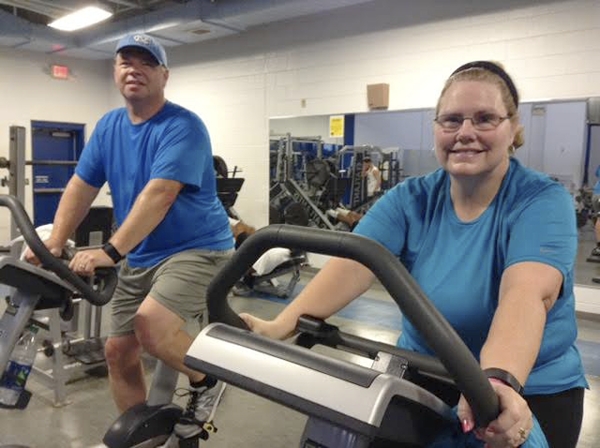 Brent Parks and Norma Honeycutt ride the stationary bikes at the Hurley YMCA where they began their wellness program 12 months ago. Submitted photo

Brent and Norma close out a successful year

For the Salisbury Post
When Brent Parks and Norma Honeycutt began their 2015 wellness journey, they were both apprehensive but ready to go. They set major goals and a few smaller ones, too. They both wanted to take a different direction after lifelong struggles with weight and overall health.

Brent was following doctor’s orders to get involved in a structured exercise program to head off impending blood pressure and blood sugar issues. Norma wanted to reverse her weight gain and find a way to help her family do the same. Brent wanted to see if he could eventually run with his wife, and Norma wanted to inspire her co-workers, many of whom had struggled in their own ways with severe weight gain. She also wanted to find consistency after previously making progress, then gradually gaining back the same pounds and more.

At our first session in January, I had them ride a stationary upright bike, and we all quickly realized how far we had to go. Brent said last week, “The first time we got on these bikes, we couldn’t go hard for five minutes.” They didn’t know how to exercise. Norma added, “I had never really got sweaty from exercise before.” With this first day, we began on a sometimes stressful, sometimes humorous and almost always challenging exercise and wellness program. I enlisted a regular group of fitness professionals that included Ester Marsh and Tammy Swicegood at the Hurley Y, Rayna Gardner at the Forum, Val Velte from Novant and Delaine Fowler from Fowler Physical Therapy.

From my perspective, the biggest challenges were holidays and vacation time for Brent and Norma, times that prior to our program removed any limits concerning overeating and seldom consisted of any exercise.

Both of them made decent progress in the first couple of months, but then lost steam as they realized that our program had a long way to go. A lot of ups and downs followed with some frustration at times but with an overall trend of success. On Thursday, Dec. 31, Norma and Brent got together to work out side by side for the last time during our program. They rode the same stationary bikes at the Hurley Y from that first exercise day 12 months ago. This time, both were able to keep up a good pace and carry on a steady conversation. I asked them to describe what was different now after 12 months of working out, practicing better eating and knocking down walls.

The first time they did this, the mood was heavy and they struggled to talk. This time, the words were flowing easily, a true example of improved cardiovascular fitness. Norma said, “I went running in the rain one day because I just had to have the exercise. During December, I missed five days of exercise. My body now craves it and needs it. My preference is outdoors, but I have fun inside, too.” Brent remembered the first time I asked him to run/walk outside. He said, “I couldn’t believe you wanted me to go outside.

It was cold! But we just finished a run a few days ago in 30 degree weather, clear and sunny. I loved it. What got me going was walk a lap/run a lap.”

Norma added, “I have to have variety, maybe three runs a week and lots of other things. But I work hard to get 10,000 steps every day.” Brent and Norma agreed that a run of less than 2 miles isn’t enough anymore.

Now for their results.

Her body fat dropped from 41.6 percent to 35 percent. Norma has inspired her staff at Partners in Learning and now thinks of fun weight-loss contests. Her family is still a work in progress.

Brent dropped 48 pounds and 21.75 inches, including 5 inches off his waist. His body fat dropped from 31.8 percent to 26.4 percent. He made significant progress on reducing his blood pressure and blood sugar.

Brent now regularly goes running with his wife and he can keep her in sight in a 5K.

Goals for 2016 seem realistic for both. Norma wants to exercise every day and lose another 40 pounds. She wants to live large and try lots of new things. Brent wants to build upon 2015 by staying healthy during his tax season, run 500 miles including at least five 5Ks, eventually breaking 33 minutes for the distance. He is just over 35 minutes currently. Brent also wants to add in some weight lifting and include consistent spin cycling classes.

While Brent and Norma will not be followed as closely in 2016, I will keep the readers up to date on their progress quarterly.

They will be around the Y and occasionally at the races or running the stadium steps at Catawba.

It’s been a fun year and I was thankful for the opportunity to work with Brent and Norma. They both know what they need to do going forward and will now be accountable to themselves. I wish them great success. We are going to continue this program in 2016 with one and possibly two new participants and keep a close check on Kristy Bell. Thanks for following Brent and Norma on their wellness journey.

Gotta Run: Winter Flight news, and when to take a day off

With just two weeks left before Rowan’s biggest race, news about some of the competitors is coming in. Runners and... read more