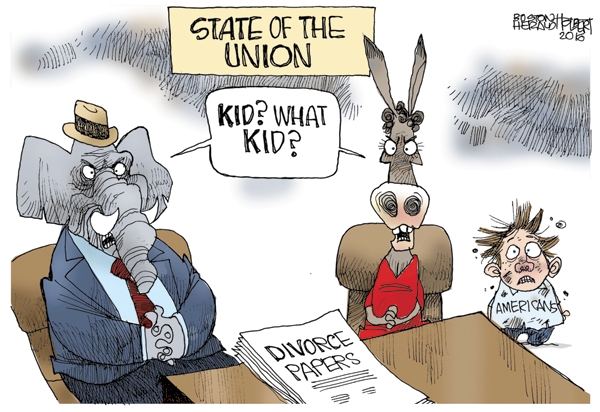 Letters: Not much controversy with so much support

I tend to agree with the China Grove “In God We Trust” case. This is a manufactured controversy by the media. Truthfully, this is a non-issue.

Having the motto on a police car is not too far from the fact it’s on currency, which has been held constitutional. … The vague nature of the term “God” does not emphasize a specific concept of God. It could vary from the Christian notion, to Hindu, to the Flying Spaghetti Monster.

Majority: “We are a religious people whose institutions presuppose a Supreme Being. We guarantee the freedom to worship as one chooses. We make room for a wide variety of beliefs and creed as the spiritual needs of man deem necessary. We sponsor an attitude of on the part of government that shows no partiality to any one group and that lets each flourish according to the zeal of adherents and the appeal of its dogma. When the state encourages religious instruction or cooperates with religious authorities, it follows the best of our traditions.” (Justice William Douglas)

In his dissent, Justice Hugo Black … warned against the state favoring believers over non-believers.

Thank you, Pat Bullard, for making it plain in regards to racism. More people need to speak honestly about the scourge instead of perpetuating it through denial.

Bullard, the rest of the county wishes that Salisbury would get in gear. It’s embarrassing when the county seat is pulling up the rear.

Commissioner Pierce’s 42 percent property tax figure neglected to offset for married couples. When his “study” was originally presented as a rationale for raising sales taxes in 2012/2013, this was made known to him. It is disturbing that he is still trotting out jerry built faux statistics after they have been proven grossly erroneous, and dismaying that they are paired with demeaning tropes of his constituents.

The census shows the reality, as it did at the time of Pierce’s “study.”

Poverty is a complex issue, but there are several areas in which progress could be made over the long term, including our education system.

While we are requiring high school students to get algebra credits, for example, many are missing the basic everyday skills of money management, of understanding credit interest, of budgeting and living within their means. Many are growing into adults without the basic understand that succeeding in a job is about fitting the employer’s needs. It’s about showing up regularly and on time, about being a productive hard-working team member, about working to get along with all kinds of people, not about entitlement to a check.

Jesus said the poor will always be with us. He also called his followers to feed and clothe them, to visit them in prison, to welcome the foreigners, to show kindness to our neighbors.

Wow. So is Craig Pierce showing his true colors now? Where are Veleria and Johnny Love?

Very revealing. Is it possible to understand poverty beyond one’s deeply held political ideology? I sure hope so because this debate and exchange about poverty between our commissioners has me deeply concerned about the prospects of economic development that benefits everyone in Rowan County.

Yes, Rev. Smith, it is possible to understand poverty outside any political point of view. The Bridges Out of Poverty model is based neither in any political nor religious ideology. It tells no one — neither “haves” nor “have nots” — what to do.

It provides our community with tools by which we can come together, identify resources (of nine resources money is only one), and how to re-resource ourselves.

As long as people are allowed to have children and get everything free,why should they change? The teacher with the four children is at least working to support her children. The girl that has the baby and gets everything free is not. Why should she? Until it is mandatory that free housing tenants must work and only the person that is on the lease can live there, things will not change.

Way to go Mr. Pierce. Blame the victims of poverty first. They did not select their predicament nor do they wish to be entrapped by its clutches. It is not your purview to judge or suggest as to the number of children a person should have under any circumstance. If the teacher commissioner Klusman mention were paid a decent wage there would be no need for us to supplement her support with food stamps. As a county commissioner, you serve all citizens of Rowan.

I guess we now have our own version of “Trump” in our airspace. They should vote to take the tax incentive back from Freightliner and actually recruit industry here for good paying jobs. Oh, I forgot, that would be to much like right. Then we would have uppity folk in the community paying taxes as well wanting a charter school.

There needs to be more on-the-ground research rather than blaming one socio-economic group for the strangling of the economic growth for the county. This was a poor argument and bad politics.

Sure there are people that should be more responsible and think before they make children, but that does not give you the right to generalize everyone in that situation because you don’t know everyone’s story and what they’ve been through in their life. Who are you to judge?

“Now, common sense tells us that those folks are probably not pulling a large percentage of the tax load. So, our challenge is to begin to overwhelm that population with an additional population that is contributing to the tax base.”

Now who are “those folks?” Are there reliable data beyond popular myth that show the percentage of the tax load “that population” pays? Should we put out an ad for that “additional population” we’re all dreaming of so that they can quickly “overwhelm” “those folks?” Or, couldn’t we just stop blaming “those folks” and begin problem solving?

No one gets $552 per child. Plus the reduced benefits (since 1994) are only available for two years andare contingent on finding work. Today, most “welfare” is food stamps, housing, and the earned income tax credit. Any actual temporary assistance buys stuff that includes sales taxes. Don’t forget that rent includes taxes. That means everyone pays property taxes in their rent and at the building where they work.

Meh, same old stories. The real question is, with cheap labor and real estate, a railroad and an interstate why can’t Rowan attract more decent jobs? A rising tide floats all boats. …We need to focus on why RowanWorks (our EDC) is failing and make changes there. Perhaps a new director? We were told Sides was the problem. What’s the excuse now? Enough with the industrial “rabbits.” We need to kill a “deer” or two.

… Are you in prison?

A wonderful message of encouragement and promise. Praying for God’s Grace once they are released and back in society.

I enjoy reading this article. It was well done. I had a son in prison and he received God as his savior. He wrote his testimony while in prison titled “In Prison And Free”. He had copies made,250copies , and they were sent to prisons all over N.C. Men gave their heart to the Lord also. Thanks again for sharing!

I am so thankful for those of you who have emailed me about this column. I am believing that God is going to use it to bring comfort and hope to many prisoners and their families, and I am believing that there will be some who accept Jesus into their hearts and lives.

Keith, I couldn’t agree more with your passion or anyone else’s whose heart breaks over the horrific experiences these refugees are hoping to escape.

I have a question I’d like your thoughts on that I hesitate to ask because online communication is so often misread in tone and intent. But I am sincere in wanting others ideas on how to screen for terrorists who are trying to come in as refugees. And if there seems no way to do this, how do we as a people tell parents to take their chances and keep their fingers crossed if they have to send their child to school where the new teacher is a former refugee who may actually be a sleeper terrorist who got through?

The large turnout actually seems to be a continuing journey for a large segment of the city that is seeking to be included in the decisions being made by elected officials. There needs to be basic security and safety — as well as economic opportunities — before officials can expect the masses to join in their leaders’ Utopian vision for Salisbury.

I’d like to at least give the council a nod for taking a first step in communicating with the public. It’s a process, this reaching across the great divide. The city has begun the process. If the model doesn’t quite work for you, put it in writing to the mayor, and suggest your idea. The council is awake now.

It was a full house, and it was very peaceful. Everyone showed a lot of respect, considering it was in a church.

Left out the most important fact, son-in-law of Millie Hall, longtime Kannapolis Board of Education member.

… A New York trip always qualified for ‘What They’re Doing’

Fifty years ago Dyke Messinger and I traveled to California for a visit with some of the Messinger family and friends. The headline under What They’re Doing: “Walter & Dyke fly west!”

This is not just a great story, it is a remarkable story. I’ve missed your (Mark Wineka’s) columns so much. I hope you are compiling them in a book. I cannot tell you how much I enjoyed every word of this story.