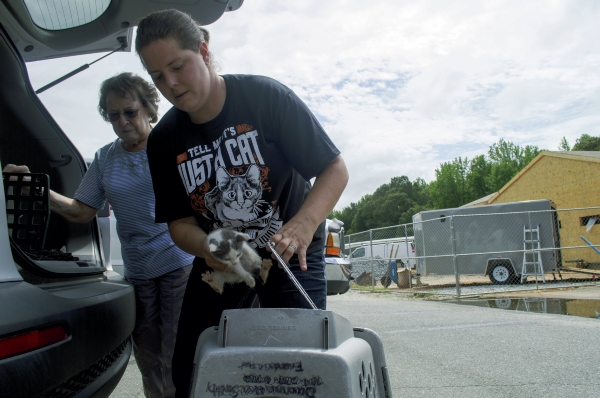 The owner of Rowan’s highest-volume animal rescue group is facing criminal charges after being tied to the abandonment of 14 cats near Statesville.

Iredell County Animal Services in December charged Jennifer Frasier and her father Craig Gordon with animal abandonment after more than a dozen cats were found on the side of Short Dog Drive near Statesville. Frasier runs Purfect Purbaby Rescue, which adopted hundreds of cats in 2015. Gordon runs a separate rescue group called Carolina Sanctuary, Frasier said.

An Iredell County Animal Control report obtained by a resident and provided to the Salisbury Post lists Gordon as an owner of the cats, but never specifically ties Frasier to an animal. Iredell County Animal Services Director Brad Gates confirmed his agency provided a copy of the report to a private citizen but declined to provide documents to the Salisbury Post associated with the case, citing another ongoing investigation. Gates would only provide basic details — date time, parties involved and charges levied against Gordon and Frasier.

When contacted by the Post, Frasier said her rescue group picked up five cats in early November from the Rowan County Animal Shelter for another group. Frasier said she gave the animals to the other group later the same day.

“From there, my knowledge of what happened is very little,” she said. “My rescue was in no way involved after we turned them over.”

Frasier said she doesn’t know how 14 cats were abandoned on the side of Short Dog Drive. However, microchips implanted in the five cats she adopted were in her rescue group’s name, Frasier said.

She said it’s common for rescue groups to wait to change microchips until a final owner is found. Frasier says Perfect Purbaby Rescue often acts as a middle-man between the Rowan County Animal Shelter, other rescue groups and individuals. She said her attorney has all paperwork needed to prove the cats were in the care of another rescue group when they were abandoned. The documents will be presented in court, Frasier said.

“Out of all the cats we’ve adopted, we have only kept about 150 to 175,” she said. “We pick up some cats for others just because they can’t get to the shelter in time.”

Iredell County Animal Services’ report about the case starts on Nov. 9 at 1:27 p.m., after a woman who lives on Short Dog Drive noticed the abandoned cats.

Iredell’s report states 11 of the cats were microchipped. The report initially states Iredell shelter staff checked one mircochip that came back to Gordon. An entry on the report one day later states all microchips matched up with kittens picked up at the Rowan County Animal Shelter by Gordon.

Frasier says only five of the cats were registered to her, which isn’t echoed in the report. However, Frasier is repeatedly referenced in the report as being a person shelter staff tried to contact in relation to the case.

On Nov. 12, under the direction of Gates, Iredell County Animal Services returned the cats to Rowan County’s shelter, where the cats were originally adopted, according to the incident report. A Rowan County Animal Control officer, following orders from Director Clai Martin, then gave the cats back to Gordon, the report states.

Martin couldn’t be reached Thursday afternoon to comment on the case.

Frasier said there’s nothing preventing Purfect Purbaby Rescue from continuing to adopt cats from the Rowan County Animal Shelter, but the group has decided to pause its operations until the criminal charges are settled.

Commenting on the charges, Frasier said she’s “pretty outraged to be honest.” She said other animal advocates on social media have repeatedly attacked the integrity of Purfect Purbaby Rescue since the charges.

“We don’t go and spend all of the time we do and dedicate our lives just to have animals end back up in animal control or left to fend for themselves,” she said. “I’ve dedicated the past two years to animal rescue with the 14- to 16-hour days I’ve put in. The thought that I would bring harm to any animal is very distressful. It kind of makes me rethink the whole ideology and whether it’s all worth it.”

Frasier said “there’s no doubt” the criminal charges resulted in a recent vandalism incident that damaged her group’s adoption center on South Main Street in Salisbury. The adoption center is now closed.