Joy Hamilton won’t let go of Christmas — at least not until Jan. 15 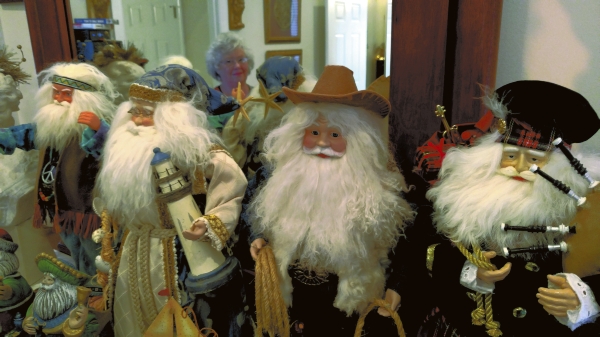 Joy Hamilton, who can be seen in the mirror, looks over some of her large collection of Santas.

SALISBURY — How do you say it politely without hurting Joy Hamilton’s feelings?

Doesn’t she realize Christmas is over? It’s time to take down and stow away for another year all of her home’s Christmas decorations. But, no.

Joy still turns on the lights to the reindeer in the yard. Her front porch holds a tall, welcoming Santa and an old sled decorated for the holiday.

Walk into her living room, and it could pass for a Christmas showroom. She still has at least a half-dozen Christmas trees beautifully decorated, and you can’t help but notice her ceramic holiday figures, nativity scenes and shelves full of Byers’ Choice Carolers, which are collectibles.

That’s hardly everything holiday related. Hamilton loves Christmas, and room after room screams it —maybe it has something to do with her name, “Joy.” But she never takes down her holiday decorations until after Jan. 15. her birthday.

Joy is coming up on her 80th birthday, and it’s always been this way. It’s a tradition her parents started after her first Christmas in West Virginia.

The weird thing is, it never stopped, and her elaborate Christmas displays and love for the holiday actually dictated the house Hamilton bought in the Countryside development off East Innes Street this past summer.

She looked two years for the home she wanted, and it had to include four bedrooms on the first floor. She needed a bedroom for her, one for a grandson, another for guests and a fourth for all of her Christmas decorations.

“This is my attic,” Hamilton says, opening the door to her Christmas room. It’s essentially a mini-warehouse. Boxes are stacked to the ceiling. She has shelves of cookbooks, games and movies, too.

“I can pull it out and decorate on my own schedule,” Hamilton says.

She starts decorating for Christmas at Thanksgiving, and it’s always a trip down memory lane. Her trees have themes, such as the Santa tree, the ocean tree, the icicle tree, the glass tree, the wall tree, the dragonfly tree, and so forth.

Everything also seems to have sentimental value connected to her late parents, her late husband Don, their three children, six grandchildren and two great-grandchildren.

In her master bedroom, Hamilton has a shimmering aluminum tree highlighted by the turning color wheel on the floor. It was her parents’ Christmas tree in the early 1960s.

“I hated it, but now it’s priceless,” Hamilton says. “I wouldn’t part with it for anything.”

She says the same thing about the village snow scene she has placed under the aluminum tree. The fence and all the buildings of the village were under her first Christmas tree 80 years ago.

“There’s just no value I can put on it,” she says.

That wooden sled on Hamilton’s front porch was her sled when she was a year old.

The top of Hamilton’s bedroom dresser is crowded with handsome Santa figures she received as gifts over the years. Take a peek in the nearby bathroom, and it has its own Christmas tree. Each step leading to an upstairs room has some kind of Santa on it.

Ornaments on many of the trees represent some aspect of her children or grandchildren’s lives — horses, ballplayers, cowboys, angels, students and travelers, for example.

“They all are symbolic of something,” Hamilton says. Looking around, she adds, “These are collections over a lifetime.”

Every year, Hamilton’s daughter Melodee buys her two new Byers’ Choice Carolers. Melodee gives her one at Christmas and one on her Jan. 15 birthday. Joy already has close to 30 of the carolers. Again, each figure holds some kind of symbolic meaning to the family.

They even create a “Christmas Vacation” trivia quiz, and it’s not unusual, Joy says, to see the grandchildren studying for the test.

“My whole family is Christmas nuts like I am,” Joy says.

Hamilton actually appreciates her Christmas decorations more in the period between the holidays and her birthday. It’s a time she often entertains friends at her house, “and I really have time to enjoy it,” she says.

After her birthday Friday, Hamilton knows the work ahead.

“Everything will be a mess, as you know, when you start tearing it down,” she says.

She also plans a major reorganization of her Christmas room, so all the boxes will be coming out of there, and she’ll be rearranging everything. She’s not complaining.

“I love to put it up, and I really don’t mind taking it down,” she says.

Another holiday tradition Hamilton’s family has is piling into a car and taking a trip on Christmas night to see all the lights in the city and county. What really devastates Hamilton is to see the houses where the Christmas trees already have been hauled to the curb.

“I can hardly handle that,” she says.