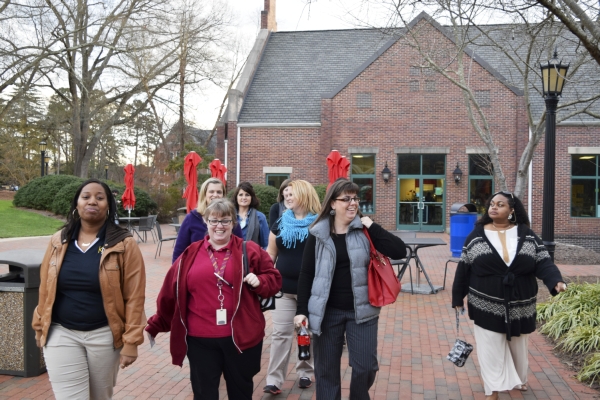 The first cohort of Catawba's M.Ed STEM program makes their way to their first class. These nine teachers were chosen from the Rowan-Salisbury School System and are attending on a scholarship provided by Fred Stanback.

It’s been a while since the teachers in the Stanback masters in education STEM program experienced first day jitters. But Tuesday, more than one admitted having butterflies in their stomachs.

The nine teachers in this year’s cohort have a few things in common. They’re all teachers currently employed in the Rowan-Salisbury School System, they all teach in a middle or high school, and they’re all getting their master’s degree free of charge.

The program was a “team effort” between Rowan-Salisbury schools and Catawba College, Assistant Superintendent Dr. Julie Morrow says, and was something the two had talked about before Fred Stanback gave the $300,000 donation that made it possible. Eleven teachers from the school system applied and nine were accepted. Morrow says they looked for applicants who were interested in collaboration and in taking what they learned back to the classroom.

This is the first masters of education program Catawba has offered for middle and high school teachers.

“This is somewhat of a new endeavor for us,” Dr. Rhonda Truitt, chair of the department of teacher education at Catawba College said.

The scholarship focuses on teachers who are interested in teaching in a STEM — science, technology, engineering and math — capacity, and Truitt says it’s one way to attract and keep STEM teachers in Rowan County.

“It’s very difficult sometimes to fill those positions,” she said.

The scholarship covers tuition for the teachers in the two-year program, and the teachers agree to a five-year commitment in the Rowan-Salisbury School System. They still have to pay for books and parking, but the new students agree that it’s a small price to pay.

Jeniffer Bain says the morning she told her class she was going back to school, they clapped and cheered.

“It was the most amazing thing,” she said.

But she never knew what she wanted to focus on, and how to do it with the least impact on her career. But the Stanback STEM program is spread out over two years, with night classes twice a week and day classes during the summer. Bain says she lives right down the road from Catawba, and felt like this was a great opportunity.

She hopes she’ll be able to inspire her students, and to be able to give them advice on college and to put into practice everything she learns.

“I think you have such an opportunity to earn a master’s degree at Catawba at no cost to you,” Dixon told the class Tuesday.

Working as a full-time teacher and taking evening classes is difficult, Waiksnis said, but the class could take comfort in one thing,

Dixon says this is their second year teaching at Catawba, and she loves it.

“It’s probably one of my favorite parts of my work,” she said.

While Dixon and Waiksnis enjoy their job as principals, she said, they are still teachers at heart.

Tuesday, Waiksnis asked the teachers what they hoped to gain out of a graduate level class, and they threw out suggestions. They wanted to be able to apply what they learned immediately, they wanted practicality over theory, and one of the Stanback students summed it up well — they wanted to be given the same standards that they give their own students.

The teachers are also taking a course in research methods for the classroom teachers, and will take classes together until they are required to choose a math or science focus.

Truitt says that the cohort has a good mix of old and new teachers — some of them have been polishing their skills in a classroom for 18 years, but a few are first- or second-year teachers.

Aliyah Sloop graduated from Catawba College in 2014 and teaches science at South Rowan High School. She doesn’t have an end goal for her degree — she just wants to be the best teacher she can be.

“I just know that I love teaching and I want to continue teaching,” she said.

But she does want to have the ability to illustrate the integration of math, science and technical skills

“I see the gaps in the public education system going from high school to college,” she said.

“I think students need to see the importance of that,” she said.

Crystal Brown is an eighth-grade math teacher at Knox. She says she’s tried to go to grad school before, but “it never panned out.” She said she’d given up until she received an e-mail about the program.

“I read about it and was like, ‘I’m gonna take advantage of it,” she said.

Brown says the last time she was a student was in 2004, and she’s nervous and excited about starting her graduate degree. And while the evening and summer classes on top of teaching full time won’t be easy, she’s got a strong motivator: her students.

“That’s what keeps me going,” she said.

Brown says that with her degree she wants to start up programs at Knox to inspire African-American girls and other minorities to pursue careers in math and science. And if she’s learned one thing teaching, “It’s never too late for opportunity to come knock at your door,” she said

The cohort is expected to complete their STEM coursework during fall 2017.