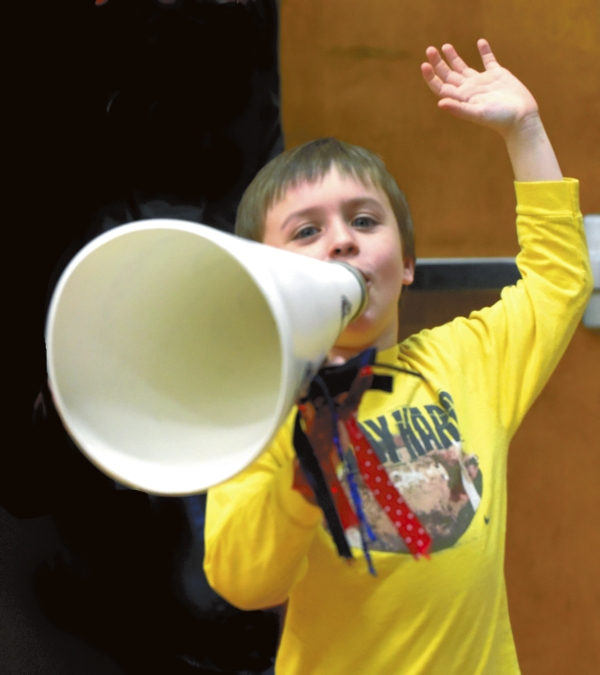 Wayne Hinshaw: The many uses of a megaphone August tries out the megaphone as a telescope. Wayne Hinshaw/For the Salisbury Post August uses the megaphone to deliver a loud message to his mother, Jennifer Sides-Smith. Wayne Hinshaw/For the Salisbury Post

The age old invention of the megaphone can be used in many ways other than just the amplification of sound. Six-year-old August Spencer demonstrated some of the uses at the East Rowan versus South Rowan high school basketball games last week.

The megaphone, or the “speaking-trumpet” as it was once called, is a cone-shaped horn used to amplify one’s voice by holding the smaller end up to one’s mouth, in front of your face, and speaking into the horn. The much louder sound leaves the bigger end of the horn.

Both Samuel Morland and German Jesuit scholar Athanasius Kircher invented crude megaphones in the 17th century around 1655. Thomas Edison, nearly 200 years later in 1878, came up with the name “megaphone” when he used the horn-shaped “speaking trumpet” to help people who were hard of hearing to hear better.

Back to young August at the East-South basketball game. The East Rowan cheerleaders left their pom-poms and megaphones unattended during the break between the girls’ and boys’ games. Young August seized the opportunity to explore the uses of the megaphone. He knew you could shout into the little end and people in the stands could hear him. He then added a left hand wave with his shout. When that became boring, he used the Mustang megaphone to cover his head and eyes. He used the horn as a telescope, without any magnification for his eye, by spying on his mother, Jennifer Sides-Smith. Getting Mom’s attention, he then shouted into the horn at close range at her.

That ended the megaphone exhibition.

Staff report SPENCER — The first steam engine rail excursions since 1994 will be going this year from the N.C.... read more