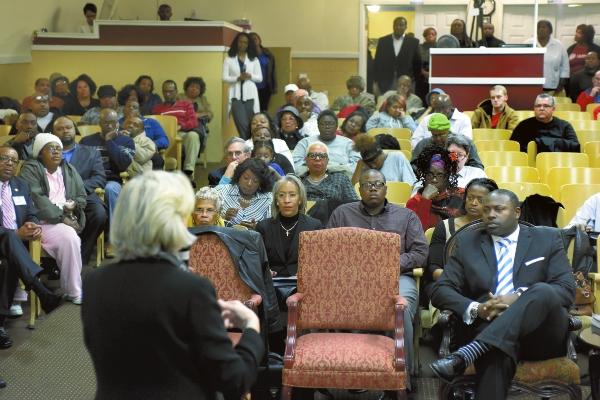 Brenda Peoples speaks at the Community Conversation held at Outreach Christian Ministries. She expressed concern about the lack of relationships between youth and city officials and the police department. Wayne Hinshaw/For the Salisbury Post The Salisbury City Community meeting at Outreach Christian Ministries was opened by the Rev Bradley Taylor with a prayer. Wayne Hinshaw/For the Salisbury Post

The event was the first in a series of discussions. Last night’s topics of discussion ranged from economic development to the new police chief to helping the youth of the community.

The event was created to have residents talk with community leaders about the ideas and concerns regarding their neighborhoods. Residents also got information about city services.

About 80 people attended the event.

“I’m just overwhelmed with the turnout because this tells me that we are beginning a new journey of togetherness, of finding solutions and common ground for the greatness of Salisbury,” Alexander said.

Some audience members were concerned about the development in the West End community. There were questions about who determines where the city’s money goes and the plans in place to revitalize the community.

Gerald Rush said he hoped the council would use funds in the budget to “infuse some money and some jobs into the community.”

Janet Gapen, a representative from the community planning services department, talked about the grants available through the Salisbury Community Development Corp. for assistance in fixing up houses and the transformation plan in place to revitalize the area.

Other community members were concerned with the relationship between the police department and the community.

“I’m hoping that community policing will become a reality. I’d like to see policemen that live in this city because if you don’t know me, you’re not going to respect me,” Dee Dee Wright said.

One person asked what characteristics the city was looking for in the new police chief.

“I want a man or woman who can come into a setting like this, meet with a group of people. Sometimes that group of people might say things that might hurt their feelings, but they’d have skin thick enough to deal with that and not get offended,” Bailey said.

He also said the new chief should be able to work in diverse communities and be an encouragement for the officers.

Some audience members were concerned with the young people of the community. There were people worried about the lack of access to activities and technology.

Brenda Peoples said the lack of relationships between youth and city officials and the police department was a problem.

“In order to reach a child, you need that personal relationship,” she said.

At the end of the event, Linda McElroy, communications director for the city of Salisbury, encouraged audience members to continue communicating with the city.

“Let us know your concern, because the only way we’re going to know is if you tell us,” she said.

At the last Salisbury City Council meeting, Alexander said Community Conversations will be hosted in other parts of the city.

The city of Salisbury will host a meeting Tuesday that is the first in a series of neighborhood community discussions.... read more