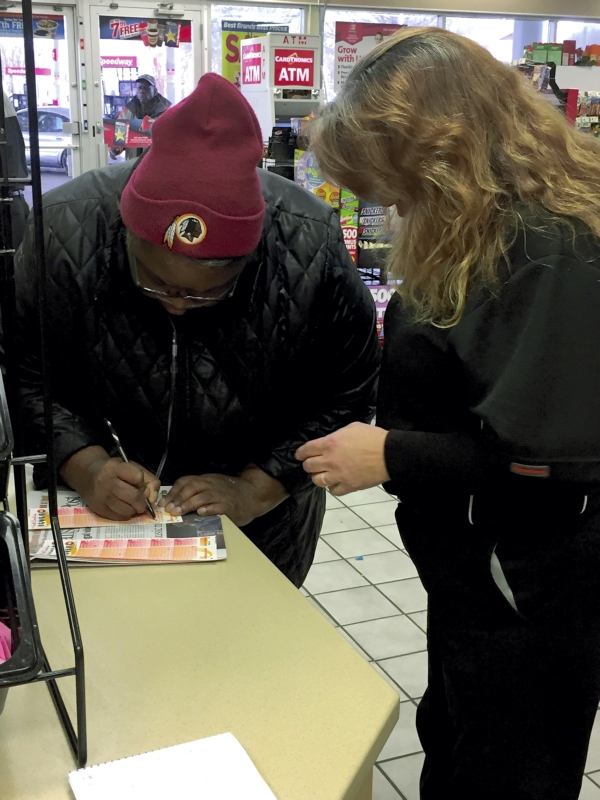 Amanda Raymond/Salisbury Post Speedway employee Kristina Lowe helps customer Patricia Ramsey fill out her numbers to buy a lottery ticket. Ramsey said her whole family will be buying lottery tickets for the Powerball drawing, which is up to an estimated annuity of $800 million.

The Ramsey family likes to take vacations together.

“We’re planning our next trip and this Powerball money is going to get us there,” she said.

Just about every person who stopped by the Speedway gas station on Friday bought a Powerball ticket, or two, and an extra employee was scheduled to handle the number of people who will be buying tickets today.

As of Friday, lottery players have a chance to win an estimated annuity of $800 million in the Powerball drawing.

The jackpot on Wednesday was the fourth largest jackpot in Powerball history, but tonight’s millions is the largest lottery jackpot in U.S. history. The jackpot actually broke its own record on Friday after increasing the amount from $700 million.

The cash value of the jackpot is $496 million.

Angie and Jack Miller, from South Carolina, were on their way to visit their daughter in Virginia. Angie Miller said she was buying a ticket in every state on the way.

Angie Miller said she would live the good life if she won the jackpot.

Ernest J. Fortune said he usually plays for smaller jackpots, but if he did win the Powerball, he said he might start a new business or get a new car.

On Facebook, Wanda Lee Johnson Hawks wrote that she would spread her winnings around.

“First thing would be to give God 10%….then share share share…I would be broke by that evening…my church would get a new fellowship building and mission house…I know God would want me to use it to help others…I am so blessed now,” Hawks wrote.

Twitter user Mollie Ruf wrote that she would “renovate the old Empire Hotel in (downtown Salisbury).”

Ramsey said for her family, it’s all in good fun.

“It’s just for fun, just having a good time with it. Between all of us, somebody’s going to win something,” Ramsey said.

Prizes of $100,000 or more must be claimed in person at the NCEL headquarters on 2100 Yonkers Rd. in Raleigh. A photo I.D. and proof of social security number are required to claim winnings.