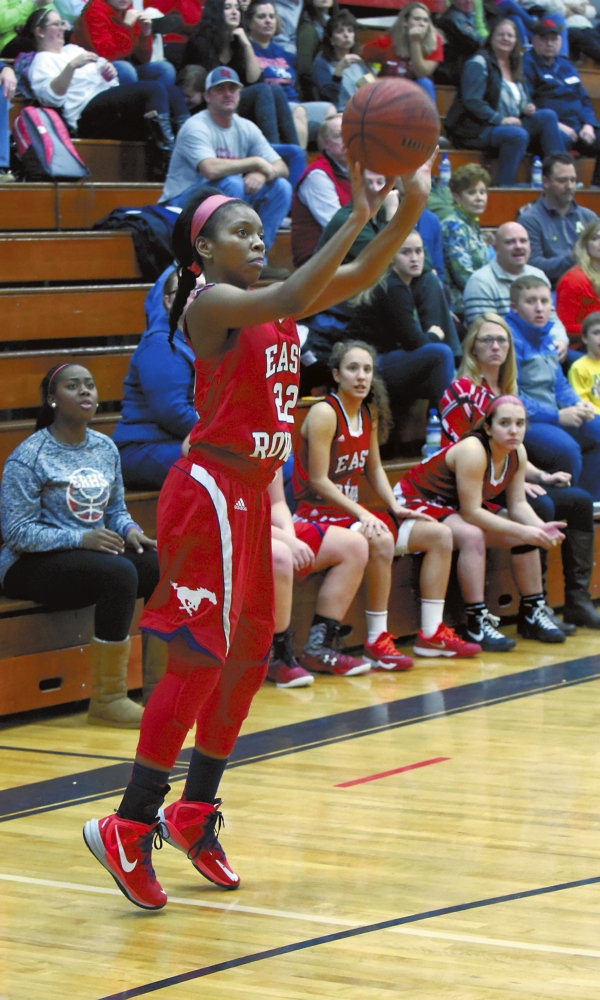 Senior guard Shenell Pharr notched a career-high 31 points and East (8-7, 3-6 SPC) needed every one of them to offset near perfection by South’s Malaysia Williams and a 23-point Raider outburst in the fourth quarter.

East seemed to be in good shape to start the final quarter with a 15-point lead, but South’s Brandy Samples drained back-to-back three pointers to start a strong rally.

The East lead was still 51-37, midway in the final quarter when Williams, a 5-9 senior forward, went on a personal scoring rampage to bring South (2-13, 1-8 SPC) almost all the way back. First, she hit a short jumper, then four straight foul shots, including two as a result of a technical on the East bench. Williams followed with a long 3-pointer at the 3:07 mark to cut the East lead to 51-46. South got as close as three points on three occasions down the stretch, including 57-54 at 6.3 seconds remaining — on yet another Williams three-point bomb.

The Mustangs were able to hold off the mad rush as Pharr scored a key lay-up at 1:15 on the clock,  then senior point guard Jocelyn Lowe hit three of four foul shots in the final 30 seconds to ice it.

“We showed some real poise at the end with the game on the line,” East coach Danielle Porter said.

South coach John Davis had nothing but high praise for his team with their remarkable rally and especially for Williams, who finished with a career-high 18 points of her own. “I always knew Malaysia had a real good jump shot, but in the past, she has not been our primary scorer,” Davis said. “This year, we need her to score more and she went out tonight and played extremely well.” For the game, Williams was a perfect five for five from the field, four of the shots from behind the arc. She was also 4-of-6 from the foul line and grabbed seven rebounds.

As well as Williams played, East Rowan’s Shenell Pharr was better. The speedy guard scored on 7-of-9  attempts on fast breaks and added 5 three-pointers as part of her career night. “We have the ultimate confidence in Shenell out there,” Porter said. “When she gets in space, she can step out for the three or use her speed in transition. She has matured an incredible amount this season and it shows on the floor.”

Before the frantic finish, East seemed to be in full control as they jumped out to a 16-8 first quarter lead that led to a 32-16 halftime margin. South aided the East cause with 16 first-half turnovers. Pharr scored 17 of her points in the first half.

Perhaps as a sign of things to come, however, South broke out of the gate in the third period with an 11-0 run, behind Williams and sophomore Riley Corriher (17 points), to cut the deficit to 32-27. But East weathered the storm as Pharr sparked a 14-0 response with two steals and 12 points of her own. That surge put East ahead, 46-31, heading into the final period, but the Raiders showed they were not finished just yet.

A key factor in the game for both teams was a high number of fouls, 23 for East and 21 for South, including a technical on each squad. But neither team could capitalize at the line as East hit just 12-of-23 foul shots while South was a bit better at 17-of-27.

Pharr was the only Mustang in double figures as Lowe, Laura Weisensell and Brittany Small had six points each. Following Williams and Corriher for South, Samples and T’Ziah Hardin added seven points each.