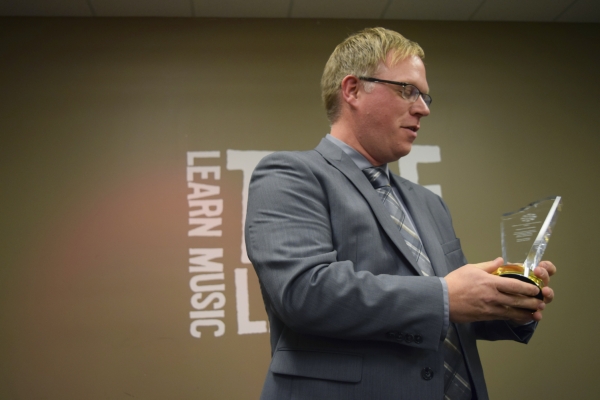 Gordon Snyder examines his award for being named the 2015 National Music Educator of the Year. The A.L. Brown High School teacher was selected from among 2,000 nominees by Music and Arts, a national music store chain. Rebecca Rider/Salisbury Post KANNAPOLIS — A Kannapolis teacher was named 2015 National Music Educator of the Year by Music and Arts, a retail chain that sells and rents music and orchestra instruments, among other products.

“It’s still kind of surreal to me,” he said.

Snyder was presented his award Thursday at the Music and Arts store at Concord Mills. Nearly 2,000 educators were nominated, Daniel Nickel, educational representative at the Concord Music and Arts, says. According to Nickel, Snyder is the first winner from North Carolina. Nickel says he couldn’t be happier.

The Music and Arts National Music Educator of the Year award has been running for about seven years, Nickel says, and winners are selected for their “ingenuity in their academic programs and design,” and are also judged on band performance and their impact in the community.

Students who came to support him say that Snyder works to create innovative programs such as music therapy and music administration in addition to traditional classes.

“A lot of his programs are unique compared to what other band directors do,” Seth Pittman said.

Pittman was joined by Patrick Fongemy and Lauryn Bainbridge, who also take Synder’s clases. The three of them wrote recommendation letters for his nomination.

For Fongemy and Bainbridge, that affect has been profound.

“The reason I’m in school is because of band,” Fongemy said.

Fongemy says he was planning on dropping out of school, and took band as “an easy A.” But Snyder made him fall in love with music, and encouraged him to stay in school. Now, the high school junior has plans to pursue a career in music therapy.

For Bainbridge, Snyder’s classes helped her grow as a person.

“It changed me, personally,” she said. “It helped me gain more confidence.”

Interim Superintendent of Kannapolis City Schools Dr. Chip Buckwell says that while it’s a great honor for Snyder, having an educator of his quality means that students have some incredible opportunities.

Snyder was awarded $1,000 by Music and Arts to use for his programs, and says he’s considering purchasing personal recording equipment for the students. Snyder says that he still can’t believe he was given this honor — especially when he considers the other incredible educators in Kannapolis City Schools and around the nation.

Amy-Lynn Albertson: Fire can be a tool, but always be cautious

Finally, it’s gotten cold and feels like winter. So let’s talk about fire. Everybody enjoys a good bonfire, campfire or... read more