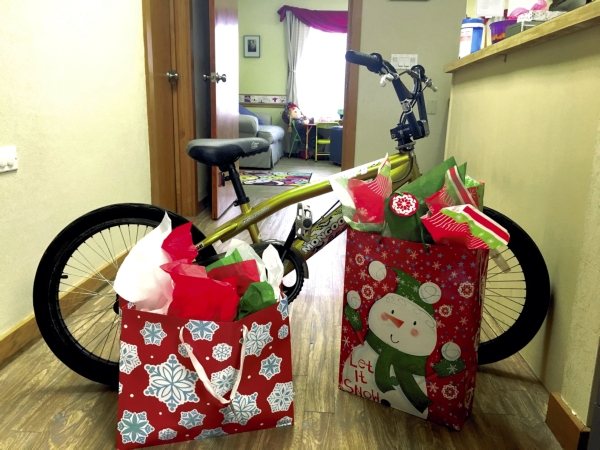 By now the last of the decorations are put away, and the Christmas season will officially end Wednesday with the arrival of Epiphany.

Beth Moore has experienced her own epiphany — the epiphany that this community steps up to help when there are families in need.

Moore, executive director of Prevent Child Abuse Rowan, knew that already. But that knowledge deepened and expanded with the success of the agency’s first Adopt-A-Child Christmas program.

“We did something on a small scale last year,” Moore said last week, “because people came by and asked to help. We thought this year, we’d up the ante a little bit.”

The staff hung up colorfully decorated tags listing children’s wants and needs. Some 46 children had tags, from infant to age 17.

“There are some families we serve who have plenty and can provide for their children,” Moore said. “But it broke my heart to see everything our children have been through and then not have anything for Christmas on top of that.”

So the tags were put up at the front desk — and quickly snagged.

“The people in the community were just so amazing,” Moore said.

Clothing and toys and coats and jewelry and crafts and accessories — the list went on and on, beyond the basics.

“We wanted our children to have a ‘want’ or two, within reason,” Moore said.

The gifts were turned in by Dec. 16. Because of privacy rules, staff delivered the gifts over the next week.

“I wish we could give the donors a chance to see just how special they have made the children and their families feel,” said Melissa Shue, the agency’s prevention and education coordinator. “One mother had tears in her eyes when she stopped by to pick up her child’s gifts. She was clearly overwhelmed by a stranger’s kindness and generosity. She shared that despite everything her child had been through, we had been able to provide her child with hope. The mother added that having hope was the greatest gift a mother could ask for.”

Another mom, Samantha, received assistance from the agency a couple of years ago at the holidays for her three girls, ages, 8,7 and 6.

“It was a blessing,” she said. “It was nice to know that with everything we were going through, people were there to help. This year was the first year I could do Christmas for the girls and help out someone else. I love everybody at Prevent Child Abuse Rowan. I automatically wanted to help.”

Samantha’s girls picked out a stuffed giraffe, a jewelry maker, and porcelain horse and some other “girly things” for a 9-year-old girl.

“We did more toys, just because I know that’s what kids want,” she said.

Samantha is also able to donate discontinued clothing and other items through her employer, she said. “For everything they’ve done for us, there’s just no way I could ever pay them back.”

Another local mom, Virginia Robertson, and husband Mark have two girls, ages 13 and 11, and she always wondered about the Terrie Hess House when she took her children to Salisbury Pediatrics just across the street. She decided to check it out and see what she could do to help.

Child abuse, she admitted, is not a happy topic. “But it’s a population that really needs some focus. I wanted to be informed and take an active part.”

That’s why she picked up a tag, she said.

One 15-year-old girl asked for a Batman pillowcase, Moore said. “She doesn’t have a bed right now, and when she got that pillowcase, she was so excited.”

The 11-year-old girl that Mark and Virginia Robertson and their daughters helped wanted a coat and a cross necklace.

“Those are the only two things this child asked for,” Robertson said. “Does that not make you want to weep?”

So Robertson and the girls supplemented the gifts with Bath & Body Works supplies, purple nail polish — the recipient’s favorite color — and other girly gifts.

“It certainly gives us a great appreciation for the basic things we have that we take for granted, like shelter and warm clothes,” Robertson said, “and the importance of a nurturing family and friends. That’s the true essence of Christmas.”

Jenn Williams also picked up a tag. In fact, between Prevent Child Abuse Rowan and an agency in Kannapolis, Williams and her clients provided gifts for almost four dozen children.

“I have a soft spot when it comes to children not having something to open,” said Williams who teaches dance fitness classes at Spotlight Dance Co. and is a hairdresser with The Hair Place.

Together, she and her clients collected bicycles, winter coats, gloves, hats, clothing — even a dollhouse and a tablet.

“There’s just something about helping a child,” Williams said. “I know Christmas is not about presents, but I can’t stand the thought of a child not having gifts.”

“When we were together at Thanksgiving, we pulled the family together and said, this is what we wanted to do for one another, going forward,” said Julie Proctor, one of the Gamewells’ three children. Proctor and husband Doug, and her brother Tomme Jr. and his wife, Char, chose tags, along with Gamewell. Their sister, Millie Harrison, who lives in Florida, bought supplies for the agency.

“They do just a wonderful job,” Proctor said. “We’re all so blessed that we want to give back. We’re going to make this a yearly event.”

“I just want to express to the community how incredibly grateful we are for everything they did to make Christmas so special for so many children,” Moore said. “We were blown away by their generosity, truly we were.”

A celebration of ages: Christmas at the Old Stone…