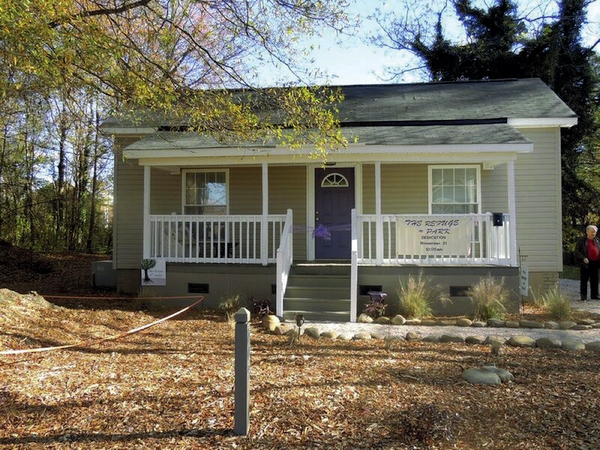 The Refuge at Park Street

Reaching Out to Make a Difference

During this holiday season, most of us can be thankful for a roof over our heads and plenty to eat. But some are less fortunate. There are folks who depend on others for one meal a day and a place to lay down their head at night.

The people who care enough to reach out to those less fortunate are heroes in a sense. They step up and make a difference.

Terri Stancil is one of those heroes. In November of 2011 she felt the Lord was nudging her to start a soup kitchen. A daycare that had occupied the 10,000 square foot building in Centerview (a community in Kannapolis), was closing. A flea market and an antique store eventually moved in, but were not successful and shut down in February of 2013.

Despite health obstacles with Terri and her husband, Grady, she was determined to start a program to reach out to those in need. Terri looked at the building and talked with a local architect. By April of 2013, Terri, who is president, and Grady, who is vice president of the non-profit corporation, started Operation Homeless Inc.

A local church helped raise funds to open the kitchen in November of 2013. The soup kitchen opened along with a clothing closet and food pantry. It is open three days a week, Monday, Wednesday and Friday from 11:30 a.m. – 2:30 p.m. They have served 19,513 meals since opening day. 38,000 pounds of food have either been prepared and served or given out. Approximately 50 people a day are served in the soup kitchen. In 2016, a local church will be serving meals in the soup kitchen on Saturdays.

Terri also wanted to provide a shelter in the same building, but it would have cost up to $125,000 to add a sprinkler system, a fire safety system and for renovations. It seemed almost impossible to open a shelter in the building. Terri said, “I do not take no for an answer. I will not give up. If I can’t put them in this building, I will put them in houses.”

In April of 2014, she noticed an auction sign on a small 1000 square foot house in the neighborhood near the soup kitchen. She had heard that some of the neighbors wanted to tear the 1920 Cannon Mills house down.

She and Grady purchased the house, gutted it and restored it. The house has two family bedrooms when needed and has a full kitchen and living area. Terri said that many local businesses provided products and services to complete the restoration. Ten homeless people have even worked on the house. “The Refuge at Park Street” interior was completed in January of 2015. The exterior was completed in November.

On November 21 of this year, Operation Homeless Inc. held an Open House and Dedication for “The Refuge at Park Street,” the new house for homeless families in the Centerview area of Kannapolis near the “Refuge of Hope at Centerview.” Guests were given a tour of the house and were invited to stop at the “Refuge of Hope Soup Kitchen” for a poor man’s meal. The “Empty Bowl Event” provided guests a bowl of soup, a piece of bread, a cookie and a drink. They celebrated the second anniversary of the soup kitchen. Donations were accepted for a fundraiser for the program.

The family house has strict guidelines for residents. They can stay in the house for up to 30 days. If they are unemployed, they are required to spend at least 30 hours a week working in the soup kitchen, the clothing closet or whatever needs to be done. Operation Homeless Inc. has provided over 600 homeless nights since the beginning of the year through our various resources.

Families are required to fill out an application, based on their income for food or clothing or to stay in the Refuge at Park Street. The Soup Kitchen is open to anyone. Donations are accepted when people come in. Most of the clients are disabled or are elderly. Some parents even come in with their children.

The small food pantry serves as a type of crisis assistance for the homeless before they are eligible for food stamps. There is also a huge clothing closet that provides clothing items or household items for families whose homes have burned or who are going through other crises.

Food donations arrive each week from a food company (approximately 400-100 pounds a week). Produce and dairy are the primary donations, and most meats have to be purchased. All clothing is donated and churches and businesses make donations too. Terri writes some grants when opportunities arise that help fund the program.

Operation Homeless Inc. is a volunteer based organization. Terri arrives at the soup kitchen at 9:30 a.m. each time it is open and works 60-80 hours a week. Her education in accounting and from a former job come in handy in the evenings when she balances the books.

Terri, along with the help from some local churches, held some special events during the holiday season. They fed families at the West Green Apartment Complex in Kannapolis on Dec. 19 and Santa visited the children. The soup kitchen’s third December House was also held on Dec. 21.