Looking back at 2015 local sports 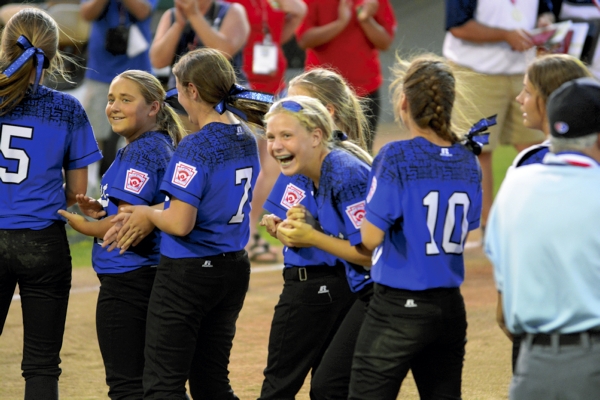 Looking back at 2015 from a local sports angle, Rowan County had another exciting year that produced some amazing results.

We thought that it would fun to rank the sports year, like the news side of the Salisbury Post does for its stories.

This review is just an opinion, folks, so please, keep in mind that we’re doing this for fun and not to offend anyone by saying our list is absolute fact (and in case we missed something). So we hope that you enjoy reminiscing with us.

For dramatic effect, the list was going to be a “count down” to No. 1, but with our top story being also the top news story for 2015, it would have been a little anticlimactic:

Could there be any other choice?

The 9-10 year-olds got it done in Portland and came home heroes. The team and coaches have been parade grand marshals and honored at gatherings of all types.

They brought home the trophy have been gracious with their time in the four months since.

The Rowan girls are truly World Champs, having defeated teams from Canada, Philippines, Washington, Texas and Rhode Island. Their run won’t ever be forgotten.

In between, Gantt took his Catawba team (47-15) to the NCAA Division II championship game before falling to Tampa, 3-1. It was the closest Catawba has come to winning a national championship in any sport.

Rowan Legion was 32-8 and it’s hard to say the state championship was a surprise with Gantt at the helm.

And the great thing about Gantt is that he remains so humble. He gives the credit to his players and assistant coaches and would just as soon be on the tractor, mowing the outfield.

Catawba returned to the top after eight years, winning the South Atlantic Conference championship for the first time since 2007. The Indians advanced to the NCAA Division II playoffs, but lost in the first round to finish 9-3.

A couple of miles away, Livingstone had its first winning season in 17 years, going 5-4. The Blue Bears played some exciting games and fell two points short against Winston-Salem State, or they may have had a chance to play for the CIAA championship.

The Hornets won the North Carolina 2A championship, blitzing many of their opponents en route to a 27-0-2 record. Salisbury, coached by Matt Parrish, went 6-0 in the playoffs, outscoring its opponents, 28-2. The Hornets topped Washington, 3-0, in the state final.

Hayes won the national championship in the 400 and 200 meters at the NCAA Division II finals. She advanced to Eugene, Ore., for the USA Track and Field Championships, but fell just short of making the U.S. national team.

Lyerly, only 16, had an unbelievable run, winning the state title in the spring and then followed that up by winning the Horace Billings Rowan Amateur in July and the Rowan Junior Open in August. He was also the runner-up in the Carolinas Junior Open.

Andrew Morgan and Phil Miller won the annual Crowder/Dorsett Labor Day 4-Ball championship at the Country Club of Salisbury, defeating good friends Derrick Lipe and Drue Davis, in what was another highly popular and competitive event.

West Rowan, under new coach Joe Nixon, went 10-4, advancing to the third round of the state 3A playoffs; Carson was 7-4 and lost a one-point, overtime game to West in the first round of the playoffs; North Rowan was 5-7 but did make the playoffs; and South Rowan punter Marshall Long was selected as a U.S. Army All-Star Game All-American.

Big news was also made when Scott Young stepped down as West Rowan’s head coach in April, due to health reasons. Young, who coached the Falcons for 17 seasons and three straight state championships (2008-10), was an assistant under Nixon during the fall.

The Blue Bears won the CIAA Men’s Basketball Tournament in Charlotte for the second straight year, and advanced to the NCAA regionals. The event is more than just a basketball tournament and is played at Time Warner Cable Arena. A parade is Salisbury celebrated the championship and Governor Pat McCrory also visited the campus to honor the Blue Bears.

North Rowan’s Cavaliers continued their excellence, tying for the CCC championship last February and advancing to the state 2A regionals, with a 19-7 record; South Rowan’s girls went 18-7 and won the SPC championship and won a first-round playoff game; East Rowan’s girls, 22-4, advanced to third round of the state 3A playoffs.

•West Rowan baseball. The Falcons won the SPC championship and had a nice run in the state 3A playoffs.

•Carson High School volleyball. The team had another banner year, going 28-3 and winning the South Piedmont Conference Tournament championship. The Cougars won 85 of 97 sets. The Cougars took two of three from arch-rival Cox Mill and reached the fourth round of the state 3A playoffs;

•Catawba pitcher Craig Brooks struck out 158 batters in 99 innings and had an ERA of 1.45. He won awards as basically the best pitcher and player in college baseball (Division II).  In June, Brooks and teammate Will Albertson were drafted by the Cubs and Yankees, respectively. Brooks signed but Albertson (26 homers, 91 RBI) passed and will be in uniform again this season for the Indians;