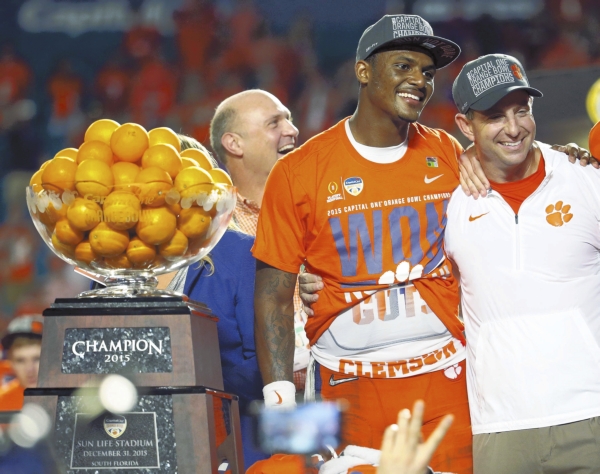 Clemson moves to title game with win over Sooners

MIAMI GARDENS, Fla. (AP) — Dabo Swinney was in no mood to talk about Clemsoning.

“Next question,” the coach snapped.

It’s time to put that term to rest.

Clemson, a team once known for such inexplicable stumbles that a derisive term was coined for it, is headed to the national championship game with a still-perfect record after a 37-17 smackdown of Oklahoma in the Orange Bowl on Thursday.

Quarterback Deshaun Watson turned in another stellar all-around performance, beating the Sooners with his arm and his legs. The Tigers defense did the rest, shutting down Baker Mayfield and Oklahoma’s prolific offense even after losing star defensive end Shaq Lawson to a knee injury early in the game.

“It’s been 34 years since Clemson had a chance to win a national championship,” Swinney said. “I knew that we would be here. It was just a matter of when.”

Clemson (14-0) dominated the second half and shut down Oklahoma’s high-scoring offense, which had averaged 52 points over its last seven contests. The Sooners (11-2) actually came into the game as favorites, but the Tigers showed their unblemished mark was no fluke.

“For some reason, we were the underdog in the playoffs,” receiver Charone Peake said. “I was glad to see us come out and dominate.”

Watson certainly lived up to the hype of being a Heisman finalist, accounting for 332 yards and earning the offensive MVP award.

He got off to a slow start passing, but came back to complete 16-of-31 for 187 yards, including a 35-yard touchdown pass to Hunter Renfrow that gave Clemson some breathing room late in the third quarter. Watson carried the running load in the early going, finishing with 145 yards on 24 carries and scoring the Tigers’ first touchdown on a 5-yard run.

“Deshaun Watson is the best player in the country. It’s just that simple,” Swinney said. “People can have their own opinions or whatever, but there ain’t a better one than No. 4. This guy is special in every regard.”

The game went back and forth through the first half, the Sooners jumping ahead on an impressive first possession that culminated with Samaje Perine’s 1-yard drive. Oklahoma went to the locker room with a 17-16 lead after Mark Andrews hauled in an 11-yard touchdown pass from Mayfield with 1:34 remaining, and the Sooners defense came up with a pick in the end zone on an ill-advised throw by Watson into triple-coverage.

If Watson was flustered by that interception, he sure didn’t show it after the break.

Clemson took the second-half kickoff and breezed down the field, covering 75 yards in 12 plays to reclaim the lead on Wayne Gallman’s 1-yard run, the first of his two TDs. Oklahoma’s first possession was the exact opposite: three straight yards-losing plays forced the Sooners to punt, setting the tone for the struggles they would face the rest of the game.

This wasn’t just a beating.

It was a beatdown.

Mayfield, who threw for 311 yards but was picked off twice, wobbled off the field in the closing minutes after taking a shot to the head. Perine went out for a while with a leg injury. No. 2 running back Joe Mixon appeared to be knocked unconscious and never returned.

“There’s no doubt that we’ve been the more physical team now for about seven weeks in a row,” said Oklahoma offensive coordinator Lincoln Riley, “but we weren’t tonight.”

Clemson, looking to become the first team in FBS history to finish 15-0, advanced to face either second-ranked Alabama or third-ranked Michigan State in the Jan. 11 finale in Arizona. Those teams met Thursday night in the Cotton Bowl.

“We’re not worried about who we play,” said linebacker Ben Boulware, named the defensive MVP.

On a balmy evening in south Florida, the orange-clad Clemson faithful gobbled up at least three-fourths of the seats at Sun Life Stadium, turning what was supposed to be a neutral-site game into Death Valley South.

They had plenty to cheer about, even after Lawson went out with a left knee injury in the opening minutes and watched the rest of the game from the bench. With his knee wrapped in ice, he was able to celebrate afterward, taking selfies with the fans, and vowed to return for the final game of his college career.

His defensive mates did just fine without him. A unit that surrendered more than 30 points in its last two games sacked Mayfield five times and held the Sooners to 121 yards over the final two quarters.

Clemson piled up 550 yards in the game, sealing the victory on Gallman’s 4-yard touchdown run with 10:48 remaining. He finished with 150 yards on 26 carries.

The Tigers played loose throughout, even pulling off some special teams trickery to set up their first TD. Punter Andy Teasdall flipped a 31-yard pass to Christian Wilkins, a 315-pound freshman defensive tackle.

“We shocked them, didn’t we?” a beaming Swinney said.

For Oklahoma, it was a disappointing end to a comeback season. After going 8-5 a year ago, including a 40-6 loss to Clemson in the Russell Athletic Bowl, coach Bob Stoops shook up his staff and guided the Sooners within two victories of their first national title since 2000.

This season was a huge upgrade, but it ended with the same result: a dismal loss to Clemson at bowl time. The end matched Oklahoma’s lowest-scoring game of the season: the 24-17 loss to Texas.

“We weren’t good enough to finish it,” Stoops said. “But we’ve still got a young team, and we’ll be encouraged about the strides we’ve taken and how close we are.”

The Tigers are almost there.

There’s no Clemsoning with this bunch.

Looking back at 2015 local sports

Looking back at 2015 from a local sports angle, Rowan County had another exciting year that produced some amazing results.... read more