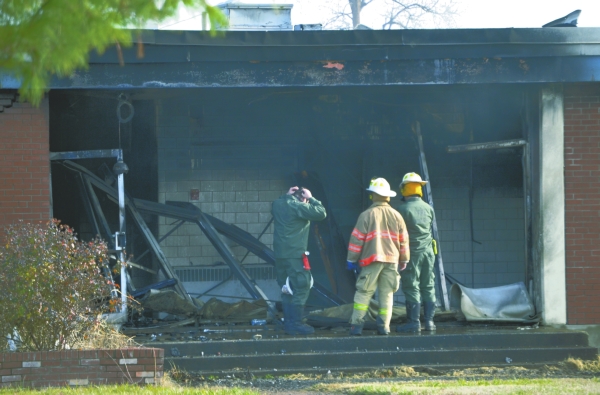 EAST SPENCER — It was a year ago that a five-alarm fire destroyed the historic Dunbar Center, leaving the 56-year-old building a shell of its former glory days. The site remains unchanged since the Dec. 30, 2014, fire, but according to an East Spencer town official, if the town is approved for a grant, change could be on the horizon.

The building at one point housed an all-black school and most recently a community center before it was sold to a local church. The building was in disrepair and sat vacant for several years. The structure had been vandalized and been used as a place to sleep by vagrants.

The fire began around 8 p.m. and continued to smolder several days later.

The initial fire call came in as a first alarm with five stations responding, but was upgraded to a five-alarm fire when fire officials used their tanker task force to access water from area hydrants. Initially, firefighters didn’t have a sufficient amount water to fight the fire.

Fire crews had to shuttle water from two hydrants — one near Bojangles’ and South Long Street. A fire investigator said a day after the fire that firefighters used 250,000 gallons of water to extinguish the fire.

In all, 18 fire departments and other fire agencies responded to the fire, four of them from Davidson County. East Spencer Fire Chief Shawn McBride estimated there were about 75 firefighters from various departments who responded.
Firefighters had to battle the fire as it blew out of both sides of the building. The majority of the damage was on the left side of the building, leaving the gym and kitchen, which are located on the right, as the only “salvageable” parts.
One of the issues fire officials faced was water pressure. The town’s 8-inch water line made response to the fire more grueling and town officials have said if the town had a 12-inch water line, the pressure would’ve been somewhat better. Fire investigators said the pressure would have been better if the town had a bigger water line, but it would not have saved the structure.

In 1900 the center operated as a one-room school, then known as East Spencer Negro School. The school eventually expanded, adding eight rooms. In 1921, the school grew to 11 classrooms complete with a library, cafeteria, basement and auditorium. The original school burned in 1938.
In 1958, the school was renamed Dunbar High and continued to accept all black students until it was integrated a decade later and renamed North Rowan Middle School. In the 1990s, some in the community wanted to turn the site into an alternative school, but eventually the school became the Paul Laurence Dunbar Center.

Although there has been some confusion following the fire as to who owns the property, according to the Rowan County tax records, Shady Grove Baptist Church acquired the property in 2008.

Grant
In April, the town board decided to look into the U.S. Environmental Protection Agency’s Brownfields Program regarding how the town could assess, clean up and reuse the site.

Although the town does not own the property, town leaders still expressed interest in rebuilding and coming up with ideas to reuse the site.

The brownfields program is designed to work with towns and states to assess sites, safely clean them up and come up with redevelopment plans. There are grant funds available for the work that will go into the assessment of the property.
The town could receive up to $200,000 in grant funds. The grant would not be awarded until late 2016, and the project wouldn’t begin implementation until October 2016. Joe Morici of Cardno Associates has been helping prepare the town’s grant application.
Morici has said the town could conduct an assessment of the Dunbar Center without owning it, but cannot conduct a clean-up of the property without owning it. The company is working at no cost to the town, but will receive payment through grant reimbursement.
Through the grant, the town will also be able to test other vacant sites in town to determine future development potential.
The grant application was filed Dec. 18 and the town won’t know until May if it is a success, said Macon Sammons Jr., grants and project manager for the town.
“Now we have to sit back and wait,” Sammons said.
Since the town is in the midst of the grant application process, which is phase I, only time will tell about the potential developments for the site. If awarded, the town can apply for a grant in phase II that would address the remediation of the site.
The grant not only covers the Dunbar Center it also includes taking a look at six to eight other properties in town including the county school administration building to see what can be done with the buildings and property.
Town residents helped the staff identify the other properties, which Sammons said have a potential for reuse or a buyer.
Contact reporter Shavonne Walker at 704-797-4253.