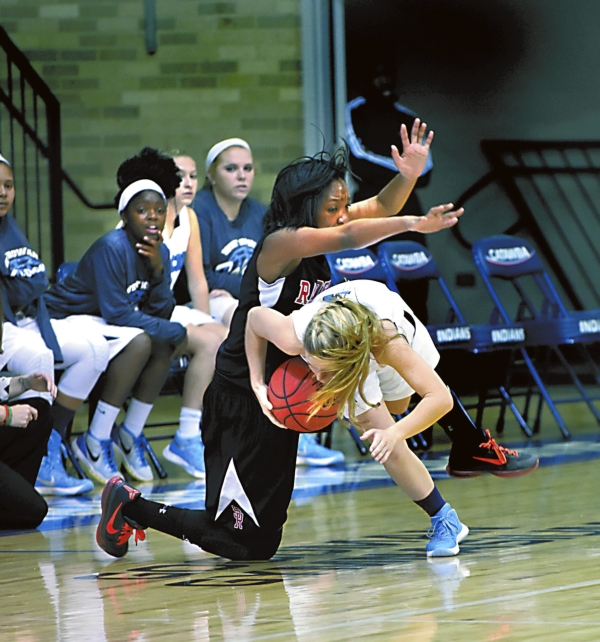 SALISBURY — For three quarters, South Rowan’s eighth-seeded girls were better than top-seeded West Rowan.
The NBA equivalent of that strange turn of events would be the Philadelphia 76ers taking it to the Golden State Warriors.
“We were missing easy shots and we were missing free throws,” said West sophomore Egypt Alexander, who led the Falcons with 22 points. “I was starting to think we weren’t going to be able to pull it out.”
Undefeated West dominated the fourth quarter. That was enough.
Taylor Martin made a go-ahead 3-pointer with 4:16 left to play, and the relieved Falcons pulled away to win, 53-44.
“We had to realize that South wasn’t going to give it to us,” West coach Ashley Poole said. “If we were going to win, we were going to have to fight for it. We finally got on the glass and won the rebounding battle against a team we should win the rebounding battle against.”
West won because of the second-chance and third-chance points produced by the offensive rebounds of Alexander and Shanice Miller. The Falcons (8-0) didn’t make their first shot very often, but they made stickbacks and got fouled on stickbacks.
“We could defend one shot,” South coach John Davis said. “But the putbacks really hurt us.”
Freshman Janiya Downs scored eight of her 12 points in the first quarter, as the Raiders pushed to a 12-9 lead.
Alexander had a productive second quarter as the Falcons calmed down and took a 21-17 lead to the break.
The third quarter provided most of the surprises. Freshman Rhiannon Kimmer nailed a 3-pointer and powered for a three-point play as South, which lost by 29 points to West on Dec. 4, suddenly surged to a 36-30 lead. West was reeling.
“They just weren’t the same South we played earlier,” Alexander said. “No. 24 (Kimmer), she didn’t play like that the first time.”
Miller had a three-point play inside for West late in the third quarter to cut South’s lead to three. That move proved to be the turning point.
“That really helped,” Alexander said. “But we knew going to the fourth quarter that we either had to get pumped up — or lose.”
Caitlin Chabala hit two clutch, go-ahead shots for the Raiders (2-9) in the fourth quarter. Her second one put South up 40-39 with 4:35 remaining, but the Falcons backed off Martin when she had the ball on the left wing at the 3-point line, and she knocked down a key shot.
“Taylor was hesitating to shoot, but there’s no one out there who’s a better shooter than her,” Poole said. “She made a big one.”
West’s leading scorer, Khaila Hall, who had been quiet to that point, made two free throws and scored on a tough drive. After Alexander swished two free throws and scored on a fastbreak off a nice dish by Hall, the Falcons had an 11-0 run and a 50-40 lead and were out of danger.
“There were some long rebounds and they got some transition baskets and pulled away from us in a hurry,” Davis said. “But the girls are putting in their time. They fought hard today and they showed that we’re getting better.”
Kimmer, Chabala and Riley Corriher scored eight points each for South.
South will play a consolation game at noon today against Davie.
West advanced to a semifinal game at 6 p.m. against North Rowan.
“Hopefully, we got our bad game out of the way,” Poole said.