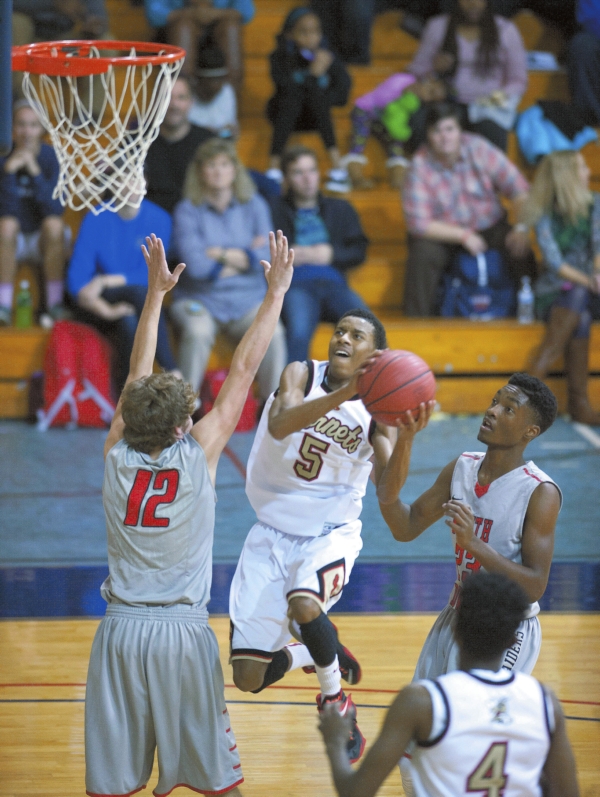 JON C. LAKEY / SALISBURY POST ... In a photo from last year’s Sam Moir Christmas Classic, Salisbury’s DeShawn Troutman (5) eyes the basket as South’s Tyler Rary (12) defends. For the second straight year, Salisbury, the top seed, and South meet in the tournament’s No. 1-No. 8 game. The Raiders pulled off the upset last December, 62-59.

SALISBURY — The Sam Moir Christmas Classic returns to Catawba College on Monday morning.
Eight girls teams. Eight boys teams. Eight games daily for three days, starting at 9 a.m.
The field is the six Rowan County public high schools, plus Davie County and Mooresville.
The best deal for adults is the $20 tournament pass.
The concept of the holiday tournament is old. This will be the 44th for the boys and 40th for the girls, but renovated Goodman Gym looks new, and Dale’s Sporting Goods, a staple in China Grove since the 1950s, is the new title sponsor.
The boys tournament started in 1971. This would be the 45th, but the measles epidemic of 1988 wiped out the fun that year.
The girls got started in 1975.
The girls played their tournaments during the Thanksgiving holiday in 1990 and 1991. Those were Tracy Connor years at South Rowan, and the Raiders won both tourneys. That’s also the last time South’s girls won. They’re in the midst of the longest drought for any of the Rowan programs.
The second-longest Rowan drought? South’s boys haven’t won since 1995.
Carson is in its 10th year, and the Cougars have yet to claim a boys or girls championship. Carson’s girls did make the final in 2010 and 2011, while Carson’s boys reached the title game in 2013.
The tournament was as crazy last year as it’s ever been.
On the first day in the boys bracket, the No. 8 seed beat No. 1, No. 7 beat No. 2, No. 6 beat No. 3 and No. 5 beat No. 4. It was a clean sweep for the underdogs in the dark jerseys. Ordinarily, “anybody can win it this year” and “throw the records out the window at the Christmas tournament” are nothing more than coach-speak, but in 2014, those worn-out phrases became reality.
No. 5 West Rowan wound up beating No. 7 East Rowan for the title. It was the fifth Christmas championship for West coach Mike Gurley — he’s tied with Sam Gealy for first place all-time — and it was the Falcons’ first title since Jamel Carpenter’s group got it done in 2005.
The girls bracket also featured some upsets, although No. 1 East Rowan beat No. 6 North Rowan for the title. Danielle Porter led the East girls to their first Christmas championship since the Maggie Rich days of 2001.
•••
Boys
It will be a shock if No 1 Salisbury (9-1) and No. 2 North Rowan (7-2) don’t advance to the semifinals this time. Salisbury already has mauled No. 8 seed South Rowan, 82-53. No. 7 East and North haven’t met.
While there was virtual parity among the county’s boys teams last season, there’s a wider gap this time between the top and bottom.
East and South have combined for only one win. East has dropped nine straight since an opening-night victory. An injury to Naquis Caldwell hurt the Mustangs, but he’s expected to return for this tournament.
South (0-10) lost its first seven outings by 20 or more points, although the Raiders’ games have been closer lately.
In fairness to South and East, a steady South Piedmont Conference diet of Concord, Robinson, Cox Mill and Hickory Ridge isn’t conducive to great records.
Salisbury’s new coach Bryan Withers was South’s coach last season when the senior-laden Raiders knocked off the young Hornets in the 1 vs. 8 matchup. Former Carson assistant Andre McCain is South’s new coach, while Kurt Misenheimer has moved up from assistant to head coach at East.
Andrew Mitchell, who coached North to tournament championships in 2011 and 2013, is back with another strong team, led by all-county players Jalen Sanders, Joseph Scott and Josh Handy, and the Cavaliers have been bolstered by the recent return of Henderson Lentz.
The comeback of Lentz, who suffered cardiac arrest at Catawba’s basketball camp last June, has been an inspirational story.
North lost an ugly, intense first-round game to East last season in the 2 vs. 7 game, but the Cavaliers aren’t likely to let that happen again.
In the first-round games that match No. 3 Davie (7-3) with No. 6 West Rowan (4-4) and No. 5 Carson (6-4) with No. 4 Mooresville (6-3), it’s hard to say anyone is favored.
West sophomore Caleb Mauldin already has turned in a 43-point game against a good Central Cabarus team, and Gurley’s Falcons have gotten a big lift from the quickness added by former North Rowan guard Paris Hillie.
Fast-paced Davie can really shoot, usually puts four men in double figures, and won a tremendous 78-72 game at West on Dec. 9. This is a rematch everyone is looking forward to.
It’s important for West Rowan to do well in this tournament. The post-Christmas schedule for the Falcons begins with Cox Mill, Hickory Ridge and Robinson. Ouch.
Mooresville hasn’t played any of the Rowan teams yet, but it has two talented former Rowan players in Corban Usry (Salisbury) and Tay Davis (East Rowan).
Carson owns some nice wins (Davie, West, Northwest Cabarrus) and got 33 points from sophomore Jamarius Hairston in its last outing. The Cougars are mostly young and mostly small, but they shoot better than they have in a long time.

•••
Girls
Seeds are based simply on this year’s records.
Usually that system eliminated any arguments and works fine, but this year the 1-4-5-8 half of the bracket is much stronger than the 2-3-6-7 portion.
There are some strange seeds because North Rowan and Davie undertake very difficult pre-Christmas schedules. Those two, along with top-seeded and unbeaten West Rowan (7-0), look like the three strongest girls teams. Only one of those three can make the final.
Davie (6-5) is seeded fifth although it beat second-seeded Carson (8-2) by 20 points. All five of Davie’s losses were to teams that have winning records.
North Rowan (5-4) is seeded fourth. North’s four losses are all to teams with winning records. Three were to 4A squads having super seasons — Ardrey Kell (9-2), R.J. Reynolds (8-2) and Northwest Guilford (9-0).
Davie and North Rowan are going to run into each other right away in the first round, and one of them is going to spend the rest of the tournament playing consolation games.
North beat Davie in a scrap in the semifinals last season.
Led by senior and 1,000-point scorer Khaila Hall, West isn’t expected to have any first-round issues. West already has beaten No. 8 seed South, 79-48. South freshman Janiya Downs is accounting for about half of the points for the Raiders (2-8).
Carson is having a fine season with a very young team and is winning all the games it should win. Carson enters the tournament riding a four-game winning streak.
The red flag is that the Cougars lost by 20 (Davie) and by 19 (West Rowan) against the two best teams they’ve encountered and both losses were at home.
Carson, which opens against No. 7 Mooresville (3-6), has a great chance to make the championship game, but it will be an underdog against West Rowan, Davie or North Rowan.
No. 6 seed East Rowan (5-5) is the defending champ and has three starters back from last season. The Mustangs have been in a shooting slump, but their rebounding makes them a tough first-round matchup for No. 3 seed Salisbury (7-3). That first-round game is a tossup.
The Hornets have improved quite a bit from last season, but their record has been helped some by a friendly schedule. Their last outing was a 56-20 loss to strong 4A Southeast Guilford.

By Mike London mike.london@salisburypost.com West Rowan graduate Shay Steele made it home for a Christmas-break pit stop before getting back... read more