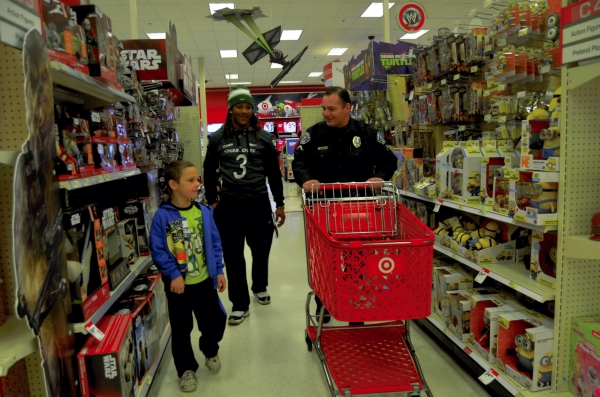 Matthew Guill, 8, shops at Target with UNC-Charlotte student-athlete Kalif Phillips and Kannapolis Police Officer Tim Everett during the Tuesday event COPS Target Kids, where children were able to shop with an officer for the holidays. Shavonne Walker/Salisbury Post

CONCORD — When it came down to the last option — buy another Christmas gift for himself or pick out something for his mom — 10-year-old Kendrick Dobson chose his mother. He went aisle-by-aisle selecting items from Super Target with Kannapolis Police Capt. Terry Spry in the COPS Target Kids for Christmas program.

This is the fourth year officers with the department, their families and other volunteers, along with the Target Corporation, have collaborated to provide children in the Kannapolis area with the opportunity to buy themselves clothing and toys for the holiday.

There were a total of 53 children who were able to shop on Saturday and Tuesday at the store.

“It’s pretty fun,” Dobson said as he was ushered down an aisle with A.L. Brown High alum Kaleb Spry, who is a student-athlete at Western Carolina and the son of Terry Spry.

Kaleb made sure Kendrick stayed within his $350 budget as he helped the fourth grader try on a pair of shoes. Kendrick was able to buy some pajamas with Teenage Mutant Ninja Turtles on them, which are his favorite movie characters, he said.

“I think we get as much out of it as the kids,” Capt. Spry said.

Dr. Chip Buckwell, superintendent of Kannapolis City Schools, who was on hand at the store, said the event is “terrific for our kids. There’s so much need in our community.”

He added they are so appreciative for the police officers and the relationship they have with the school system.

“It makes the community a better place to be,” Buckwell said.

Officer Daniel Wallace said the police department works with the school guidance counselors to help them identify children in need. Some of the families have more than one child who were able to shop. The children were able to spend $350, but half had to go toward clothing items.

Wallace said they received a $12,000 grant from Target and were able to help all who applied.

Not only were the officers able to be a positive influence on the children, but the student-athletes who helped the children shop were as well.

Kalif Phillips, an A.L. Brown alum and football player with the UNC-Charlotte 49ers, volunteered for the second year. He said it’s about helping the children, especially during the holidays.

Matthew Guill, 8, was so excited at the chance to buy a light saber, but he couldn’t decide between a red or green one. He hurriedly moved from one Star Wars item to the other. He picked out a few games and other toys as well as browsed the clothing department with officer Tim Everett.

“It’s for the kids. I have four boys. I know what it’s like to struggle. Parents don’t always have the money,” Everett said.

Therese Roberts, an executive team leader for human resources, said not only were store associates available to greet the children and officers, but Target group partners and district leaders. She said the event is the biggest program in the region.

The first year the program began the store was able to provide $5,000 in gift cards and they’ve since been able to increase that amount to a $12,000 grant.

“We like to support our local law enforcement,” Roberts said.