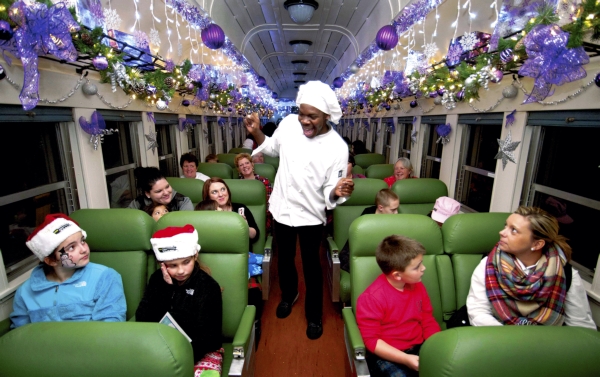 JON C. LAKEY / SALISBURY POST Chef Daniel Brown sings and dances along with the songs as the Polar Express story is read. The Christmas spirit is alive and well along the tracks at the North Carolina Transportation Museum for the The Polar Express Train Ride. Monday, December 21, 2015, in Spencer, N.C.

SPENCER – The sights, sounds and magic of Santa’s voyage to the North Pole are part of the story of “The Polar Express,” Chris Van Allsburg’s classic Christmas story.

And now, thanks to local actors, volunteers and the staff of the N.C. Transportation Museum, that magic voyage is part of thousands of children’s memories.

“The Polar Express” train ride at the museum sold out every one of its runs this year, with over 25,000 tickets sold.

This follows last year’s inaugural season, which was also completely sold out.

Only two places in North Carolina, and only a handful in the U.S. and Canada, offer train rides that retell the story of “The Polar Express.”

“We do a lot to build up excitement,” said Kristen Trexler, special events director at the N.C. Transportation Museum, “and we’ve gotten really good reviews.”

At the Barber Junction Station visitors center, kids and families were greeted by dancing elves and reindeer.

Then, the Polar Express arrived to take them all on an unforgettable train journey.

With hot cocoa, performers and a live reading of “The Polar Express” on board, the train ride carried riders to the North Pole and Santa’s workshop.

After their visit, Santa boards the train for the return journey, and each child gets a special gift – a sleigh bell, based on the scene in the book, and the 2004 Warner Bros. film – where a young boy receives a bell as the first gift of Christmas from Santa himself.

For David Breeden, 6, and his sister Molly, 3, getting to meet Santa was the highlight of the night.

For their parents, the best part was seeing their kids enjoy the trip, Beth Breeden said.

“Everybody we know has been here,” said Beth, who drove from Clayton with husband Jonathan and their two kids for Monday’s first train trip.

“The whole thing is so well done. It was lots of fun,” Beth Breeden said.

Elizabeth Motley, of Martinsville, Va., said her son, Luke, “is a huge ‘Polar Express’ fan. We watch it year-round!”

Luke, 3, rang his sleigh bell with delight as Elizabeth and James, his parents, looked on.

“This is an awesome experience,” Elizabeth said. “The whole atmosphere on the train, the performance, is great. We could make this a tradition.”

“We have a lot of happy families here,” said Kevin Cherry, deputy secretary of the N.C. Dept. of Cultural Resources. Dressed in a conductor’s uniform, Cherry watched from the platform as riders boarded for the night’s first run.

“It’s a way to bring families together, to do some fun activities and witness something special,” Cherry said.”

“This is why I do it,” said actor Nathan Rider, with Lee Street Theatre, who plays a conductor on the Polar Express, as smiling kids got off the train at Santa’s workshop and looked with delight at the waiting sleigh and reindeer.

Nearby, a few moments later, a girl pointed at the Spencer railway museum’s roundhouse – now illuminated by spotlights and covered in glowing lights – and called out to her family, “We’re at the real North Pole!”

In addition to family outings, there have been two marriage proposals on the Polar Express this season, Cherry said.

It takes over 70 volunteers and staff to put on the performances, including actors from Lee Street Theatre, dancers and entertainers.

“After their ride, they can enjoy Candy Cane Lane and the reindeer games,” Trexler said. Those areas feature fire pits where families can roast s’mores, a face painter, model trains and photos with Santa.

Trexler said that this year, extra runs were added to try to accommodate demand.

For next year, staff are looking for opportunities to expand the event further, Alexander said.

Those involved say they’re glad to be able to share the magic of the Christmas season with others.

“Seeing the kids’ faces when Santa hands them the bell makes the experience so worth it,” Holshouser said.