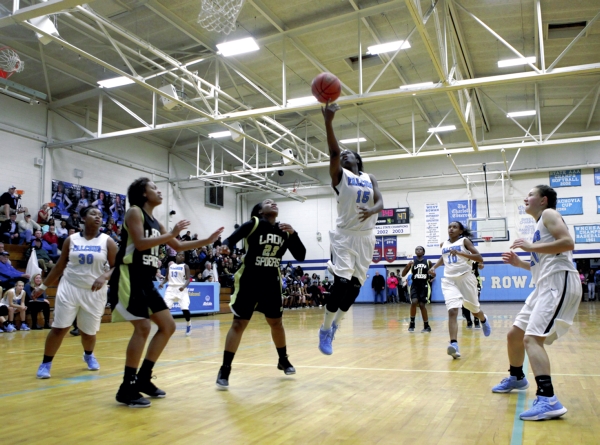 MOUNT ULLA — West Rowan’s girls reached the holiday break undefeated and will be the No. 1 seed for the Dale’s Sporting Goods Sam Moir Christmas Classic at Catawba.
West held off Concord 65-53 on Friday, a challenging victory that kept the Falcons one of the two SPC teams with perfect league records. Hickory Ridge also is unbeaten.
The last time the Falcons made it to Christmas undefeated was in 2012. They won the Moir tournament that year.
West (7-0, 6-0 SPC) drilled six 3-pointers in the first half, dominated the second quarter, 16-4, and took a 35-19 lead to the break. Khaila Hall and Mary Sobataka made two 3-pointers apiece. Alex Linder and Miyanah Pruitt came off the bench to contribute the other 3-pointers.
“Just super-proud of the first half we got from everyone,” West coach Ashley Poole said. “But we needed to put two halves like that together, and we didn’t. Concord got hot from outside and they made it a tough game for us.”
Concord hit four 3-pointers in the second half and got a flurry of buckets in the paint from hard-working De’Niya Gravely, who scored 16 points.
When Taylor Martin hit a 3-pointer for the Falcons with three minutes left, West led 57-46, and it appeared over, but a few seconds later, the Spiders (2-5, 2-5 SPC) had sliced the lead to 57-50.
After Martin hit two free throws and Hall dished to Kia Pharr and Martin for layups, the lead went back to 13 points with a minute left. That’s when Poole could finally relax.
“Concord made a comeback on us and they really fought for it,” Hall said. “That’s a team that’s improved a lot.”
Hall had six assists and seven rebounds and contributed her best shooting game in a while with four 3-pointers and 16 points.
“I’ve been in the gym working hard on my shot,” Hall said. “I was ready to go.”
Martin added 13 points for the Falcons. Sobataka had 11. Egypt Alexander had nine points and seven rebounds.