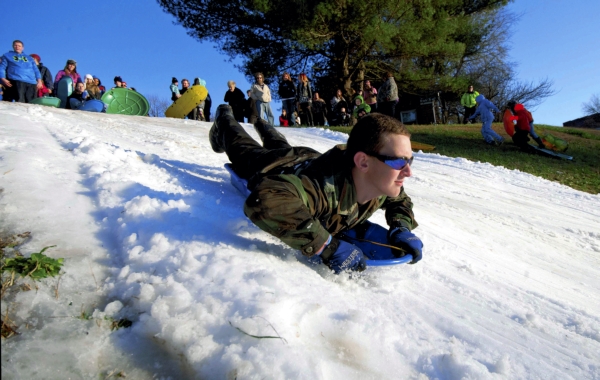 JON C. LAKEY / SALISBURY POST Ian Nettles, from Woodleaf, comes down the hill. China Grove drew in sledders from all over Rowan County and beyond on late Friday afternoon and evening to take advantage of a 22-foot wide manmade sledding slope behind the China Grove Police Department.

CHINA GROVE —For hours on Friday, residents from all over Rowan traveled here for a rare December sledding experience.

Snow isn’t a common sight in Rowan County when it’s 50 degrees and clear, but the town made it a reality Friday during its Christmas in the Grove event. Sledders slipped and sped down a strip of manufactured snow on Swink Street. At the top stood a crowd of people, chuckling at wipeouts and lining up for their own shot at a sled run.

Woodleaf resident Ian Nettles, 15, said Friday afternoon was a field trip of sorts. Indeed, there’s not many times when it’s wise to leave the heavy coat at home when sledding. Sledders on Friday managed to get by with a light coat, long pants and a hat.

“Especially with the warmer ambient temperature, you can go more quickly and its more fun,” he said.

After a few slides down the hill, Ian said he was still searching for the best way to slide down. His sister Laura was doing the same. The pair said they don’t have many big hills near their home in Woodleaf.

They took several trips down the hill. On one occasion, Laura sped down the hill and smashed straight through a nearby bale of hay. Dozens of others did the same, slipping and sliding their way down 8 tons of ice onto a plastic sheet anchored by hale bales below.

A few speedy sledders slipped into the muddy, grassy plain below. It dirtied their coats a bit, but only created more smiles.

“This is what a small town is all about,” said China Grove Mayor Lee Withers. “These are the kinds of events that make our town great.”

As Withers spoke, he stood amongst the crowd of parents and onlookers who belted out “oohs” every time sledders bumped into each other. Parents carefully waited for sledders below to clear before launching their children down the snow slide.

The strip of snow mirrored a summer slip and slide. It was China Grove’s winter version of Salisbury’s Slide the City — a massive water slide down Main Street — earlier this year.

Food sales and free ornament making will continue starting at 6 p.m. today. The most concentrated center of events will be in front of the police station on Swink Street. A number of other events will be added to the mix at other locations in China Grove. Sledding and surrounding events are all scheduled to start at 6 p.m. and end at 8 p.m.

The China Grove Roller Mill will have horse and wagon rides. Carolers on the roller mill’s front step will serenade passersby. Santa Claus and Mrs. Claus will be in Hannah Park, where Carson High School’s cheerleaders are also scheduled to do face painting. Characters from the movie “Frozen” will be at Encore on Main. St. Mark’s Lutheran Church will have a live nativity scene in conjuction with Christmas in the Grove events. The church is inviting the public to participate.