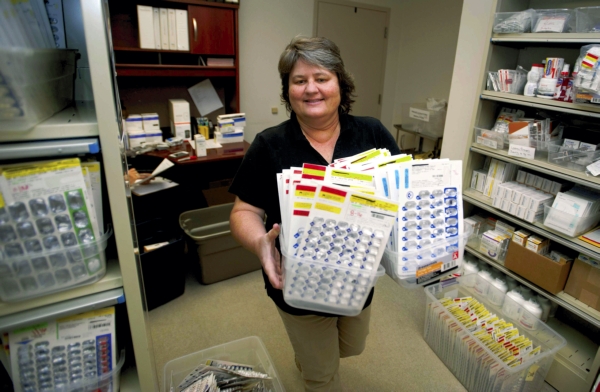 At the Community Care Clinic of Rowan County, there’s a section of neatly organized plastic bins that contain thousands of blister packs of medication for chronic disease management. The solemn face of Protestant Reformation leader Martin Luther keeps a watchful eye over the bountiful stash.

The staff of the clinic, which cares for underserved and uninsured adults, refers to the stockpile as “Lutheran meds.” Patients refer to them as a blessing.

These medications are donated by the pharmacy of Lutheran Services Carolinas. Every day, the LSC pharmacy in Salisbury receives unused drugs from its nursing homes, including Trinity Oaks health and rehab in Salisbury and other facilities in Hickory, Albemarle, Clemmons, Winston-Salem and Wilmington.

Medications are returned for different reasons, including the discharge of a rehab patient or the death of a resident. Instead of disposing of the unused drugs that can’t be returned, pharmacy director David Beam sees that the medications are processed and then collected in large bins, which are picked up twice a month by Vicki Peeler of the Community Care Clinic.

Beam and his staff are happy that the unused medication can legally have a second life. That’s because it comes in blister packs — medication packaged in bottles cannot be reused.

LSC began donating medications to the Community Care Clinic about 10 years ago, but processing the donations became too burdensome for the small clinic staff. Now, volunteer help is allowing the clinic to accept the donated medications again, and patients are reaping the benefits.

Angela Graham comes in every week to sort the medications and file them in what clinic employees call “the library.” The clinic pharmacist then logs them all into the computer before they are dispensed.

Although it’s hard to attach a dollar figure on the donated medications, Krista Woolly, the clinic’s executive director, estimates that it’s upwards of $30,000 annually. The donations mean that the clinic can put medication in people’s hands who could not afford it otherwise, Woolly said.

Many of the donations are maintenance medications for chronic conditions like high blood pressure or diabetes. Having those drugs donated means the clinic doesn’t have to purchase them, which helps stretch clinic funds. Woolly notes that the clinic doesn’t ever have to buy certain medications like Lasix because LSC donates more than the clinic can use. The medications also enable the clinic to help patients recently discharged from the hospital fill their prescriptions while they line up other resources, says pharmacist Julianna Parrish.

The hospital also benefits, Woolly explains, because when people get the medication they need, they are far less likely to make costly emergency room visits.

When the Community Care Clinic gets more Lutheran meds than it can use, it shares with The Good Shepherd’s Clinic at First Baptist Church in Salisbury. The Storehouse for Jesus, a non-profit ministry in Mocksville, also receives some of LSC’s medication, Beam says.

Recently, a patient came in who could not afford the medication she was prescribed after a hospital stay because of a high insurance deductible. The clinic’s Lutheran meds enabled her to get a very costly drug free of charge — saving her the $1,000 she would have had to pay out of pocket. “She had no idea how she was going to get the medication otherwise,” Parrish said.

Several weeks ago, a woman came to the clinic in tears. Because of major health issues, she’d been hospitalized and was unable to keep her health insurance. The clinic was able to fill her prescriptions on an emergency basis until she could see her doctor. The total retail value of the medications she received was $3,470.69 — and the medications from LSC accounted for $2,327 of that total, Woolly said.

Luther once said of prayer that it is a very precious medicine. But actual medicine is precious, too, especially to those for whom it may not be easily available.

“Partnering with LSC has been a win-win for both organizations,” Woolly says.  “We share the same mission statement in many ways: to serve the underserved, to provide compassionate health care to all, and to do this with love and provide hope. While the monetary value is huge, the service the clinic and LSC provides is even bigger. I think Luther would be proud!”

Courtesy of Lutheran Services of America

Review: ‘The Force Awakens’ is a ‘Star Wars’ film worth seeing

“Star Wars” is a cultural phenomenon worth investing in, and its newest addition should be on every to-do list. The secret... read more