With love, from Jacob: Balloon message travels 100 miles back to family 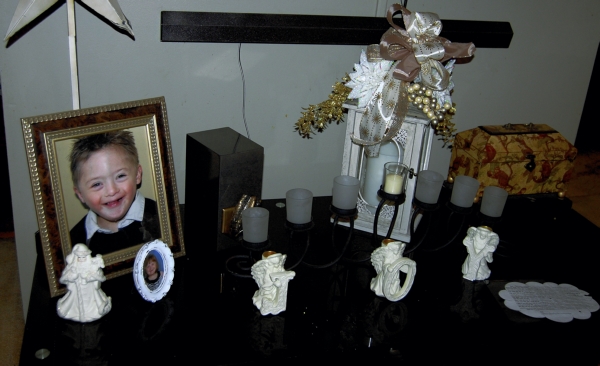 A photo of Jacob Usher sits on a table in his family’s home. A message released with a balloon for Jacob, who passed away in March, returned home a couple of days later after traveling more than 100 miles. Amanda Raymond/Salisbury Post

That was one of Linda Hawkins’ first thoughts when she got the news.

No one really expects a message sent off with a balloon to travel more than 100 miles back home with only a few small holes to show for the journey.

It’s no wonder Hawkins was, and still is, in disbelief.

Linda Hawkins’ son Jacob Usher passed away in March of this year at 7 years old. Jacob had Down syndrome and heart issues, which led to four open-heart surgeries before he was 4 years old. Jacob developed pulmonary hypertension during his last procedure, so he had to go back to the hospital every year for a cardiac catheterization, or heart cath, to test how well his heart was doing.

During his last heart cath, Hawkins said, the doctor perforated his main artery. Jacob’s lungs filled with blood and he could not recover.

The family was in shock. They had gone through so many surgeries with Jacob; for him to pass during what seemed like a less dangerous surgery than open-heart surgery was devastating.

“For that to happen that day, we were just blown apart over it,” Hawkins said.

A guidance counselor at Granite Quarry Elementary School told them about Camp Erin, a weekend, overnight camp in Rutherford County for children and teens who have lost a close loved one.

During the weekend, Hawkins’ children participated in many activities meant to help their grieving process, Jaylee, Hawkins’ daughter, said.

At the very end of the weekend, the kids attached cloud-shaped notes to balloons to be released. The cloud had fill-in-the-blank statements that allowed the kids to write how they had been feeling about their loved one’s death and what they would want to say to their loved one.

The balloons were released and the campers went home.

On Wednesday, Hawkins got a message from Norma Huneycutt, the executive director at Partners in Learning Child Development and Family Resource Center, a place Jacob had attended from infancy through pre-kindergarten. Huneycutt told Hawkins, who she is good friends with, that someone had found a cloud-shaped message written to Jacob Usher and was wondering if they wanted the message back.

Cayden, Hawkins’ son, was the one who wrote the message that was found. He said the whole thing was just weird.

“If he had not put his full name, they would have never been able to figure out who it was,” Hawkins said.

Lee Lanier was the one who found the note. He lives in Reeds, N.C., outside of Lexington. He said he was out in his pasture one day feeding his animals when he found the note.

Lanier said at first, he thought it was a piece of a feeding bag.

“When I picked it up, I noticed that it had some writing on it and I started reading it,” Lanier said.

Lanier could easily tell that it was a message to a lost loved one, and since there was a hole punched in the side of the paper, he assumed it was tied to a balloon at one point.

Even though there were numerous animals running around on the pasture, the cloud message did not sustain much damage. There are two small holes in the paper, and the writing is a little faded and smudged because it was written in pencil, but other than that, the message is in good condition.

Hawkins laminated it as soon as she could.

And it was in the one spot in the pasture that Lanier has to walk by every day to get to a certain cage.

On top of that, there are only two houses in the area where the message landed and woods surround the houses.

“It looks like somebody had a hand in placing it right where it was,” he said.

Lanier had two choices: he could throw the message away or he could try to find the family it belonged to. He wanted to do the latter, but was nervous that the family would not be happy that their message did not go where they wanted.

“I didn’t know if it was something maybe the family had written saying, ‘Hey, we’re going to send a message to your brother,’ and then if it had been found back here they’d be like, ‘Well, wait a minute, he didn’t get it because we sent it up to him and he didn’t get it,’” Lanier said.

Lanier and his wife searched Jacob’s name online and found his obituary and also found out that he was a student at Partners in Learning. Instead of contacting the family directly, they sent a Facebook message to Huneycutt, telling her that they found the message and asking if the family would want it back.

Huneycutt knew that Hawkins’ children had gone to a grief camp, so she assumed the message was from that weekend.

“I knew immediately Linda would want to know this,” Huneycutt said.

Huneycutt immediately got Hawkins in contact with the Laniers.

“I believe that God winks, and this is just another way of God reassuring this family,” Huneycutt said.

Hawkins contacted the Laniers that same night and told them she was overjoyed that they found the message.

“Jacob touched so many lives while he was alive, and he is continuing to connect people in his death,” Huneycutt said.

Partners in Learning let Hawkins set up a memorial garden for Jacob at the center, and Huneycutt said the families just love it.

The love for the garden speaks to the love anyone who knew Jacob had for him. Huneycutt described him as happy-go-lucky and said he was always smiling.

Hawkins said Jacob was sweet and loving. When he was at home, he had full control of the television. He loved acting out movies, scene by scene, which Hawkins had to sit down and watch every minute of.

Jacob’s favorite movie was “Toy Story,” and he was a super fan. At one point, he had seven Woody dolls. He even had a pair of “Toy Story” boots. And, of course, he knew every line of the movie.

Jacob also loved the beach, the Cat in the Hat and his black fedora hat.

Hawkins could only describe the whole situation as amazing.

“It could have gone in all these different directions, but it came home,” she said.

Hawkins took the message returning home as a sign of Jacob’s presence and love.

“When you lose somebody that you’re so close to, you look for things to believe in,” she said with tears in her eyes.