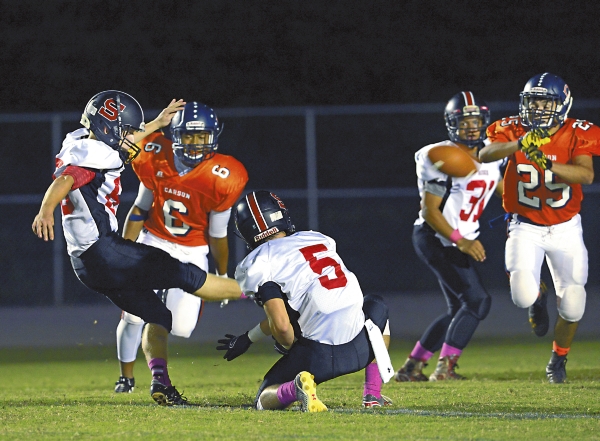 South Rowan vs. Carson from this past football season. -- Wayne Hinshaw/for the Salisbury Post.

The NCHSAA released its first draft of realigned conferences on Thursday.
This realignment takes affect on Aug. 1, 2017, and will last four school years.
This draft is not final. There’s still a window for appeals and adjustments and there’s an extended timetable for concerns to be heard by a realignment committee.
But if this first draft holds up, Carson, West Rowan and East Rowan will stay together and will head west for a six-team 3A league that will include a trio of Iredell County schools.
South Rowan will be headed north as part of a nine-team 2A league that will include Salisbury and seven Davidson County schools. One of those Davidson schools, Oak Grove, will be opening in 2017.
Like South Rowan, North Rowan is looking at drastic schedule changes. The NCHSAA first draft has North Rowan in an eight-team 1A league that includes four Stanly County schools. It is a league that will stretch as far as Asheboro’s Uwharrie Charter Academy.
After fighting uphill 4A battles against Charlotte giants, A.L. Brown is headed for an ideal situation, a six-team, all-Cabarrus County 3A league, that includes rival Concord.
The look of Davie County’s 4A league will change quite a bit, but the War Eagles will stick with familiar opponents West Forsyth, Reagan and R.J. Reynolds.
For many years, the NCHSAA has been dividing its 400-plus member-schools into four classifications of almost equal size. In May, however, the NCHSAA board opted to institute a 20-30-30-20 plan, which means 30 percent 2A and 30 percent 3A schools instead of 25 percent. Now only 20 percent of the member schools fall into the 1A and 4A classifications.
There will be only 76 4A schools when this realignment is implemented, which means 64 out of 76 will qualify for the football playoffs.

Proposed conferences are:
1A — North Rowan, Albemarle, West Montgomery, North Stanly, South Stanly, South Davidson, Gray Stone and Uwharrie Charter. Gray Stone and Uwharrie Charter don’t have football programs, so North Rowan would still have six open dates to fill for football. North Rowan played in a similar 1A league from 2009-2012, when it was a member of a Yadkin Valley Conference that included epic road trips to North Moore and Chatham Central.

3A — Carson, East Rowan, West Rowan, North Iredell, Statesville and South Iredell. It will be similar to the North Piedmont Conference that Carson, East and West competed in from 2009-2012.

3A — A.L. Brown, Concord, Cox Mill, Central Cabarrus, Northwest Cabarrus and Robinson. It will be an all-Cabarrus County South Piedmont Conference, as was the case from 2009-12. Hickory Ridge exits, moving up to a 4A league with Charlotte schools.