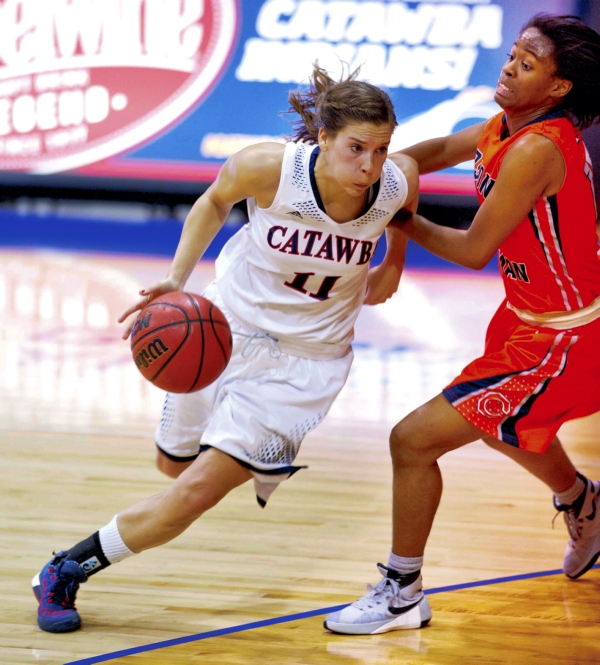 The Lady Indians played with pre-holiday enthusiasm Wednesday night at Goodman Gym, where they surged past Carson-Newman and held on for a 79-66 victory.

“This comes against a very good opponent,” coach Angie Morton noted after Catawba (4-6, 1-3 SAC) won for just the second time since mid-November. “We played as a team, we were strong from the get-go and we were ready for them.”

Catawba was paced by forward Terri Rogers, the league’s top freshman last winter. She shot 9-for-15 from the field, scored a game-high 23 points and yanked down 14 rebounds. Teammate Bri Johnson contributed 18 points and four assists despite playing with a virus, while sophomore Alexis Newbold harvested 16 points and seven rebounds from 14 minutes off the bench.

“It seemed like everyone came ready to play,” Johnson said after making half of her 12 field goal attempts. “It wasn’t a one-man show.”

“They ran it down our throat,” C-N coach Mike Mincey said after the Eagles (7-3, 1-3) tumbled into the bottom half of the conference standings. “I think our first five possessions were five turnovers. It took us a long time to find our rhythm.”

Catawba played with a determined flow and led, 43-18, when Newbold converted a pair of free throws with 1:39 remaining in the first half. By then, it was evident that Carson-Newman — ranked eighth in the Division II SIDA Media poll and the SAC’s best 3-point shooting team — was off its game. The guests finished just 4-for-24 from long range.

“Coming in 0-3 in the conference, we felt some pressure tonight,” Rogers said. “We knew what we had to stop and once we got a feel for it, once we got on a run, we weren’t letting up.”

Especially Rogers. The 5-foot-10 sophomore was a carpe diem kind of player — she seized the moment.

“I think Terri Rogers was ready to play,” Morton said after collecting her 197th career win at Catawba. “I told her in the locker room before the game, ‘Every rebound is yours. You’re going to score most of your points off of offensive rebounds.’ And she went to the boards like a warrior. Any time we got her the ball in the paint, she was unstoppable.”

Rogers was at her best when it mattered most. She scored 10 points in the third quarter, including back-to-back layups that made it 54-30, early in the period. In the fourth period, her three-point play with 9:52 to go provided a 23-point lead and cemented the outcome.

“(Coach Morton) knows me and knows what I can bring to the team,” Rogers said afterward. “And she knew this was long overdue.”

Carson-Newman staged a late rally and trimmed its deficit to 76-66 when Kayla Newman made two free throws with 1:08 remaining. Catawba used two last-minute foul shots by Newbold and another by Johnson to close the scoring.

“It’s a great weight off our shoulders,” Johnson said. “We needed this.”