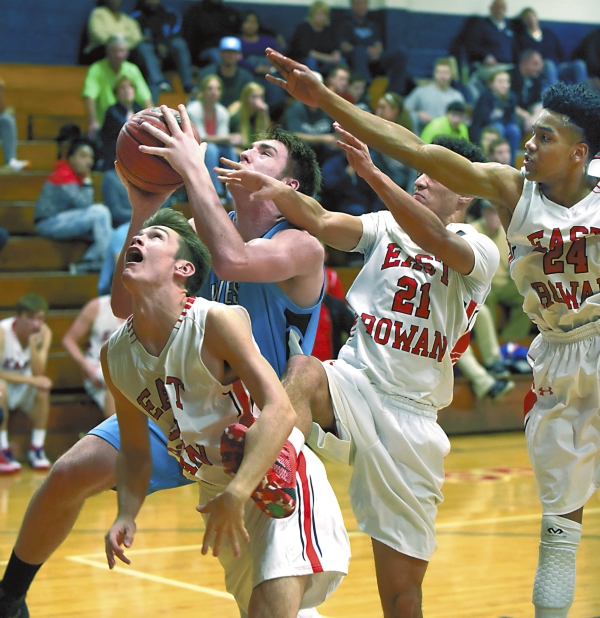 Wayne Hinshaw/for the Salisbury Post ... At right, West Rowan’s Caleb Mauldin (with the ball) is surrounded by East Rowan players as he moves toward the basket.

GRANITE QUARRY — West Rowan’s boys won’t have many routine victories in the South Piedmont Conference, and they had to scrap for a 65-51 basketball win at East Rowan on Monday.
Struggling East led at halftime,  33-32.
But West coach Mike Gurley didn’t complain about how his guys played.
“Hey, I’m just happy we won,” Gurley said. “I’ve been coming to Granite Quarry for longer (19 years) than any of my players have been alive, and not a lot of those trips have been easy.”
Caleb Mauldin scored 18, Paris Hillie had 16, and Austin Love had 11 for the Falcons.
Both teams have a guy named Austin Love, who is a key player. West’s version is the junior baseball pitcher committed to UNC. He’s a muscular power forward who averages double-digit rebounds.
East’s Austin Love is a senior and is a crafty, streak-shooting guard. He scored 14 for the Mustangs to share team scoring honors with Bravon Goodlett.
“East has three guys (Love, Bravon Goodlett and Bravon Goodlett) who are a pretty good collection of drivers and penetrators,” Gurley said.”There were times when they hurt us.”
Undersized East (1-8, 0-6 SPC) got eight second-quarter points from Love and six hard-working points in the quarter from recent jayvee callup Trevor Scruggs to claim that one-point halftime lead.
“We played good basketball for a half,” East coach Kurt Misenheimer said. “But we’re not deep and we’re not big and we’re playing without two starters (Naquis Caldwell and Paiton File) who would make a difference.”
Gurley’s halftime speech was apparently a good one.
“We were coming off that big win at Central Cabarrus and I guess we thought we were just going to come here and step over East,” Hillie said. “So we kind of got chewed out at halftime. We came out in the second half playing with a lot more energy and playing better defense.”
East scored six points in the third quarter, as the Falcons (3-3, 3-2 SPC) took control. It was a combination of tighter, smarter defense by West and East wearing down.
“West is very physical,” Misenheimer said. “Their bigs are bigger than our bigs and their guards are bigger than our guards. We’re making some strides, we’re getting better, but we have four guys playing 30 minutes a night. We just got tired in the second half.”
Hillie hit a long 3-pointer for West’s first double-digit lead at 47-37, late in the third quarter.
East chased and fouled some down the stretch, but Martavio Rankin knocked down four free throws and the Falcons stayed ahead by a comfortable margin.
“We had guys who didn’t score a lot, but Jayson Delgado and Daniel Day gave us very solid games,” Gurley said. “They rebounded. They got after it on defense.”
With West coming off a big road win — Mauldin scored 43 in Friday’s overtime victory at Central Cabarrus — and East banged-up, it was an obvious trap game for West, but the Falcons got through it.
“The older I get the more I’m convinced that trap games are self-induced,” Gurley said. “You do something good, like we did Friday, and expectations do rise a little bit, but I thought we handled things OK. At halftime, we told the guys to just go out and play together, and they played tougher and contested East’s shots a lot harder.”