A ring, a mystery and four honest men 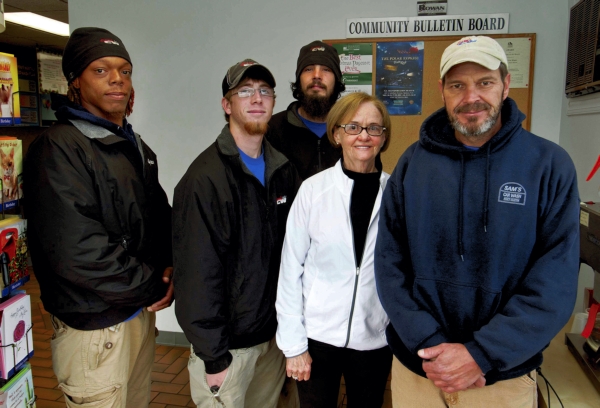 Judy Isenhour had moved on from her lost ring.

Husband John had given her the pink sapphire and diamond ring for their 30th anniversary in 2009. The ring went missing less than two years later after Judy slipped it in a pocket while having her nails done. When she stuck her hand back in the pocket about 35 or 45 minutes later, it was gone — no ring.

She and John did everything they could think of  to find the ring.

“We searched for weeks,” Judy says, “ran ads in the paper, put up notices all over town, went to every merchant in town, and visited every pawn shop within a 100-mile radius.”

Judy never forgot about the ring, but at some point she stopped searching and moved on.

Then one day last month — more than four years after the ring disappeared — Wade Rouzer called. Was she missing a ring?

Back in January, Wade had bought a used BMW from Salisbury Motor Co. on the same day the car was traded in.  “It was impeccably clean,” he says.

Wade retired from Rouzer Motor Parts several years ago and was in his second career as a youth pastor at St. James Lutheran Church in Concord.  The car met his needs.

Fast forward several months and many trips back and forth to Concord. Wade went to retrieve his cellphone from his car one evening and found a ring in the cup holder. He had been to Sam’s Car Wash earlier in the day. The workers there had come across the ring while vacuuming, and they put it in the cup holder.

Impressed with their honesty, Wade found out who had cleaned the car that day — Wesley Chippewa, Kyle Firman, Darius Geter and Donald Varnadore — and gave them Sonic gift cards.

Then he set about trying to return the ring to its owner. He dismisses the thought that this required any honesty on his part. “It was the right thing to do,” he says.

He asked his daughters and wife Peggy if any of them were missing a ring. No, they weren’t. He asked people from the church. No one had lost a ring.

He knew the car had previously belonged to Judy Isenhour. Salisbury is a small town; he knew Judy. So he called her and said he’d found this ring.

When he finally showed it to Judy, “her mouth just fell wide open,” he says.

‘All kinds of stuff’

Glenn Allen, owner of Sam’s Car Wash, says strange finds are common in the car wash business. “We find all kinds of stuff.”  Once an employee found a couple thousand dollars under a car’s floor mat.

“The customer said he forgot about it,” Glenn says.

This ring was another valuable find — but one the owner could never forget.

And now she’ll never forget how she got it back.

“In this sometime disenchanting world with all its flaws, there still is, and always will be, good and honest people,” Judy posted on her Facebook page after getting the ring back on Nov. 10.

Wednesday morning, she thanked the good and honest men at Sam’s who found her ring. They told her that when they slid the driver’s seat forward to clean underneath, they saw the ring stuck in a track and pulled it out.