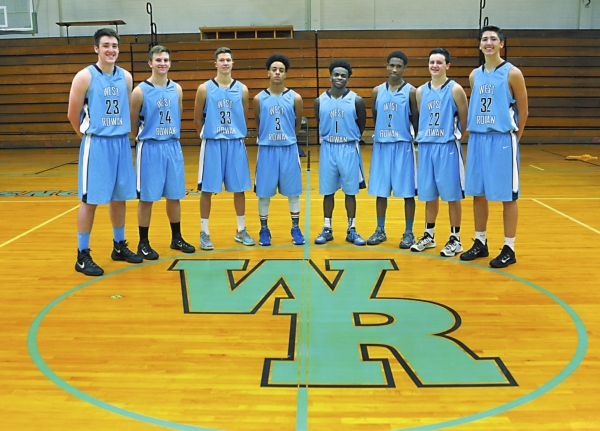 MOUNT ULLA — West Rowan’s boys spent last season dribbling in the right direction.
Coach Mike Gurley found a way to make a re-tailored offense fit and steered the Falcons to a winning record, a Christmas Tournament title and a 3A state playoff appearance.
But all of a sudden, last year seems like a long time ago.
“I know. It’s like we’re starting all over again,” said Gurley, now in his 19th season at West. “I guess the theme for this year is ‘progression.’ We’ve got to take each game as a learning environment and see if we can get better game-to-game.”
Statements like that make the Falcons hard-to-read, which is probably the way Gurley wants it. The storyline hasn’t changed much, but at least three players return from the squad that went 13-12 overall and placed fourth in the SPC (9-7) despite dropping its final three league decisions, then closed the season with a one-sided playoff loss at Weddington.
“We were playing real well until exam week,” the coach said. “We had a nice rhythm going, then didn’t play for eight days and were never the same.”
Fast-forward to this season. West had only eight players in its gym until post-Thanksgiving. Help arrived when the Falcons’ football season ended three weeks into the playoffs, putting more boots on the ground. But Gurley will build this team around 6-foot-7 sophomore Caleb Mauldin, a 210-pound high-rise defender who only needs more consistency after averaging 10.9 points per game as a freshman.
“Last year he gave us some really, really great moments,” Gurley said. “At other times he didn’t get involved. With the great players, you always know what you’re going to get and that’s what we need from him.”
Mauldin may have to be the man in West’s front court, with help from power forward Austin Love.
But the backcourt provides fertile ground for a budding future. There’s North Rowan transfer Paris Hillie, a 5-8 junior point guard who is strong with the ball. “He’ll make our offense flourish,” said Gurley.
Juniors Jayson Delgado and Nick Warren will also vie for playing time. Delgado, a high-octane shooting guard, stands 5-9 and connects with accuracy. Warren is a bulked-up 5-9 guard — a sharp passer who plays with confidence.
“He holds himself accountable,” Gurley said. “He’s not a guy who’s gonna hog the potato chip bowl.”
Other early-season players included Payne Stolsworth, Zach Powers and Daniel Day. Throw it in the blender with a handful of football double-dippers and you’ve got a team that’s more resourceful than scary — but that could change.
“People around the county may laugh because we’re so inexperienced, but these guys will have to play big roles,” Gurley noted. “That’s the tough part.”

Players to watch:
Caleb Mauldin, sophomore forward: He’s as good as he is big — and he’s 6-7. Equipped with good hands, quick feet and a sharp, basketball mind, expect him to be double-teamed. Gurley says he’s developed an invaluable mid-range shot selection.
Jayson Delgado, junior guard: A 5-9 shot of Red Bull every night, he’s the guard without a mute button. A good shooter learning to make better on-court decisions.
Nick Warren, junior guard: Tough guy who spent many off-season hours in the weight room, he brings grit to a team that badly needs it. Nephew of 2002-03 West standout T.J. Gaither.
Paris Hillie, junior point guard: The SPC is about to find out how big a 5-8 point guard can play. Not a prominent scorer in North Rowan’s rotation a year ago, but a sure ball-handler who will play a key role. Don’t lose track of him.