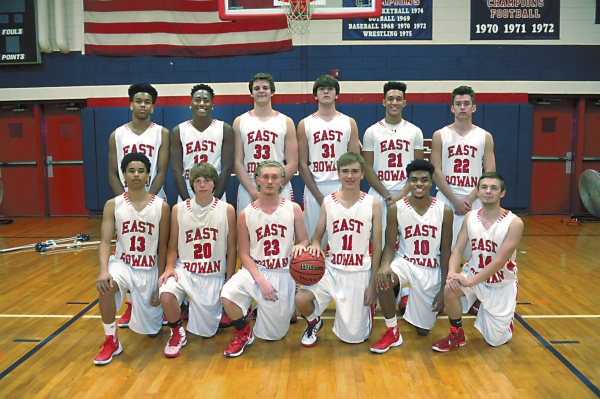 GRANITE QUARRY – After putting in quality time over the years as a player, JV coach and varsity assistant, Kurt Misenheimer is now the head man for East Rowan basketball. He insists his team will demonstrate the hard-nosed defensive style he employed himself as a top player with the Mustangs.
“This team is going to work hard on defense and we will always be defensive-minded,” Misenheimer said. “We’ve got guys who can score, but we have got to be a team that can stop the other team. I learned in high school I could score 21 points but if I didn’t cut my man off and take a charge, I was getting yanked to the bench. I am going to have the same mindset with this team.”
The Mustangs are looking to reverse their recent basketball fortunes, coming off a 9-14 campaign last season. They have not produced a winning season or made the playoffs in four years. East graduated four seniors, including the Wyrick brothers, and lost two anticipated regulars, forward Tay Davis (Mooresville) and guard Isaac Baker (Salisbury) to transfer. But the Mustangs return a core of five experienced senior performers and have some promising new faces up from the jayvees.
The five returning seniors include guards Bravon Goodlett and Logan Shuping, wings Naquis Caldwell and Austin Love and post man Corbin Elliott.
Misenheimer says he looks to his experienced players for the intangibles. “Senior leadership is a big thing for me,” he says. “That leadership trickles down to the other guys and communication is always key on offense and defense.”
Misenheimer had the highest expectations for Caldwell, but was hurt in the Carson game and is going to miss at least four weeks with a knee injury.
“He was our 10 and 10 guy, a real workhorse,” Misenheimer said.
Varsity newcomers will be called on to contribute right away, including play-making sophomore guard Bryson Sprinkle (5-10), junior point guard Lucas Morton ((5-10) who brings intensity to the team, and 6-2 freshman wing Brevin Goodlett (Bravon’s brother). The rest of the varsity includes senior Cody Meadows and juniors Franklin Downing, Ellis Taylor and 6-4 Paiton File.
Misenheimer spent the last three seasons as JV coach and varsity assistant to Trey Ledbetter. For his first varsity team, Misenheimer has surrounded himself with “great coaches and teachers.” His top assistant is veteran John Cherry, who brings high school and college experience to the team. Other coaches include former Mustangs Jordan Shepherd and Roby Holmes.
“These guys know what they have got to do to be a successful team,” Misenheimer said. “Playing smart and playing hard-nosed defense is going to be the first step in giving us a chance to win.”
East Rowan Players To Watch:

Naquis Caldwell: 6-3 Sr. F – A solid inside rebounder and scoring threat, Caldwell had 25 points and 17 rebounds in one game as a sophomore.
He was hampered by illness and injury last season, appearing in just 15 games and averaging 3.5 ppg. He’s a talented football wide out and likely will be a college player.
Bravon Goodlett: 5-10 Sr. PG/SG – averaged 9.3 ppg. Last season and was the Mustangs best perimeter defender with his speed and quickness. One of the Mustangs best shooters, he scored in double figures nine times last season including a team-high 18 points twice. He will play both guard positions this season.
“Defense wins games,” he said. “We just have to get after it each and every play to be successful.”
Austin Love: 6-2 Sr. Wing – Can slash through the lane as well as hit the outside jumper. Love averaged 8.2 ppg. last season in 21 games. He be counted on to create scoring opportunities for himself and teammates.
“If we listen to the coaches and work hard every day, the sky is the limit for us,” Love said.
Logan Shuping: 5-11 Sr. SG – Shuping is the team’s designated long range bomber, draining 3-pointers from the corners as easily as he nails long putts. He’s an East Carolina golf signee.
“When he’s open, he’s got the green light,” Misenheimer said.
Shuping played in all 23 games last season, averaging 7.7 points per game.
Corbin Elliott: 6-5 Sr. C – Gives East a rebounding presence after spending the off-season in the weight room bulking up.
“He’s big and strong and knows how to use his size,” Misenheimer said.