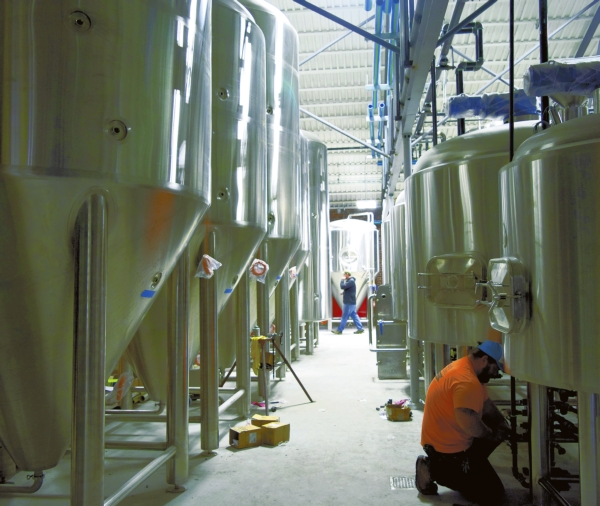 The opening of New Sarum Brewing Company’s taproom and brewery has been eagerly awaited in Salisbury, and owners say that the wait is almost over. New Sarum is expected to open its North Lee Street location in the first quarter of 2016, show runners Gian Moscardini, Andy Maben and Tony Hornick said.

“We’ll be open before you know it,” Maben said.

In a previous article, the new hotspot was expected to open in the summer of 2015. It’s December now, and Moscardini says summer may have been an overeager estimate. The old Tractor Building at 109 N. Lee St. didn’t have water, sewer or a roof when renovations began, so there have been a few hang-ups.

“It’s just the nature of the beast,” Moscardini said.

New Sarum has suspended production at its 117 S. Lee St. location during construction of the new brewery, only venturing out at special events like the downtown Summer Sip Festival. But despite flying “under the radar” Maben says they’ve received nothing but support from the community.

The new brewery features a 30 barrel brew house. At the South Lee Street location it took Brewmaster Maben 22 days to make five barrels. Maben is hoping the new brewhouse will cut that time in half.

“We have a lot more control in this situation than before,” Maben said.

They’ve put a lot of extra money into cleaning supplies and technology that will ensure a consistent product, as well, Maben said. Moscardini, who’s family owns the Salty Caper, said that they walked into brewing beer in 2012 already knowing a lot about the market. And having a consistent, solid product is how you win the market.

The new brew house has a lot more automation than the old building. A simple command on an iPad sends for grain from two outdoor silos, regulates yeast count, or cools the brews. Moscardini says that this is what New Sarum is all about.

It’s in the name. Sarum comes from Old Sarum, an archaic name for Salisbury, England — this Salisbury’s sister city. The folks at New Sarum marry old-fashioned brewing techniques with new technology and their own special flair.

“We’re not like a lot of other people,” Hornick, the production manager, said.

These are the tried and true brews that made a splash in the community through sales at Salty Caper locations in Salisbury and Mooresville, La Cava Restaurant, and the Lee Street Theater.

“For three years we just sat there and worked out our recipes,” Moscardini said.

And they have five winners. But that doesn’t mean the brew crew is done experimenting. Maben says they hope to bring in a smaller, eight-barrel brewing system at the end of next year that will allow them to make seasonal beers and test out new recipes in the taproom.

But just because they have five solid recipes doesn’t mean they’re perfected.

“We can always make it better,” Hornick said.

New Sarum’s taproom looks out on Depot Street and will feature an area for customers to hang out and try a few brews. It will have a glass window looking into the brewhouse, and Maben says he plans on conducting tours.

When the extension opens, New Sarum will self-distribute beer between Charlotte and Winston-Salem and High Point. But despite the expansion, Moscardini, Maben and Hornick wanted to stay close to downtown Salisbury for a reason — it’s home.