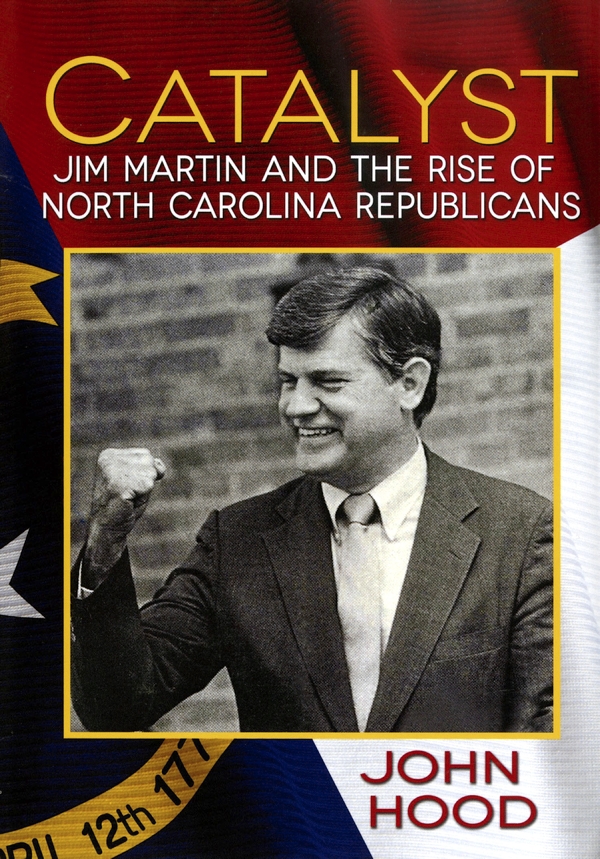 “Catalyst: Jim Martin and the Rise of North Carolina Republicans,” by John Hood, will bring the author, who is chairman of the John Locke Foundation, and former Gov. Jim Martin to Literary Bookpost Thursday night for a book signing and discussion.

In 1985, newly elected North Carolina governor Jim Martin met with Tennessee governor Lamar Alexander, U.S. House Speaker Newt Gingrich and six other Republican leaders to map out a strategy for making the GOP competitive in state and local elections, particularly in the South.

That the strategy this group developed has succeeded shows Martin’s under-appreciated role as a catalyst for political change in North Carolina and beyond.

This book chronicles the life and political career of Martin, North Carolina’s first two-term Republican governor. Before his election to that job in 1984, Martin served 12 years in Congress and six years on the Mecklenburg County Board of Commissioners.

He began his professional career as a professor of chemistry at Davidson College, his alma mater. During his long political career, Martin often led the way in showing his fellow Republicans that political pragmatism could work hand-in-hand with fiscal conservatism.

Along the way, his career has intersected with such notable figures as Richard Nixon, Jesse Helms, Jim Hunt, Ralph Nader, Ronald Reagan and Elizabeth Dole.

In “Catalyst,” we follow Martin from his days in the 1960s as chairman of the first Republican-majority commission in North Carolina’s most-populous county to his 2012 role in investigating scandals at the University of North Carolina.

In a questions and answer session with Levine Museum of the New South, Hood says Martin approaches things as a scientist and educator. In interviews with Martin, Hood said he often used models of molecules and DNA to explain political or philosophical concepts.

Hood believes Martin did not get the same kind of attention as other colorful North Carolina politicians, but had a profound affect on the state’s government.

Hood is also president of the John William Pope Foundation, a Raleigh-based grantmaker. He writes the “Free & Clear” column on politics and business for Business North Carolina magazine and appears on talk shows and radio programs.