‘We must endure:’ NAACP renews fight for justice at freedom fund banquet 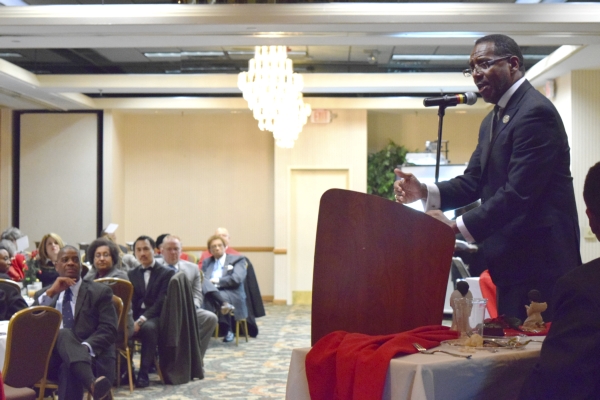 The NAACP has made some huge strides in its 106 years of history, but it’s not done fighting yet, North Carolina NAACP President Rev. Dr. William Barber said Saturday night.

Barber called in to the Rowan-Salisbury branch of the NAACP’s yearly Freedom Fund Banquet and reminded the branch that this was “no time for foolishness.”

“We don’t have any time for small things or small issues,” Barber said.

Currently, the NAACP in North Carolina, and nationwide, is fighting for causes such as better education, universal access to health care, assured voting rights and environmental responsibility.

The keynote speaker at the banquet, the Rev. Curtis Gatewood, second vice president of the N.C. NAACP, picked up the thread of Barber’s plea and reminded members of the Salisbury-Rowan branch that they needed to endure.

Gatewood quoted the Rev. Dr. Martin Luther King Jr.: “The ultimate measure of a man is not where he stands in moments of comfort and convenience, but where he stands at times of challenge and controversy.”

We are living in that time of challenge and controversy, Gatewood said, and it’s time to see what people of faith are made of.

“Where are we, the righteous?” he asked. “This is our time to stand.”

In a time when thousands of North Carolina families of four are forced to survive on less than $11,000 a year in extreme poverty, when voter rights are being compromised and people who need access to healthcare aren’t able to receive it, showing faith requires a lot more than putting money in an offering plate.

Showing faith is more than putting money in an offering plate, he said.

“That’s not the way Harriet Tubman showed faith,” Gatewood said. “That’s not how David showed faith . . . If you have faith, you should be willing to sacrifice more than your last penny.”

Having faith in an age where people are shot in churches means enduring, Gatewood said, it means standing up, speaking and hearing the truth, and it means having a plan.

“We need to know what the game is,” he said, “so we don’t get misdirected anger at the wrong people.”

He said members of the NAACP need to educate people on how things get done in voting and politics.

There is a formula to moving forward, Gatewood said. People should strive for education — of self and others — equality, economic sustainability, voter protection and equal protection under the law. These are the things the NAACP is facing this year, and these are the things people of faith should be fighting for, as well.

The NAACP will be holding a gathering in Raleigh on Feb. 13 to lobby for voter and voter registration rights.

The NAACP Freedom Fund Banquet is sponsored by Food Lion, the City of Salisbury and the Salisbury Post.