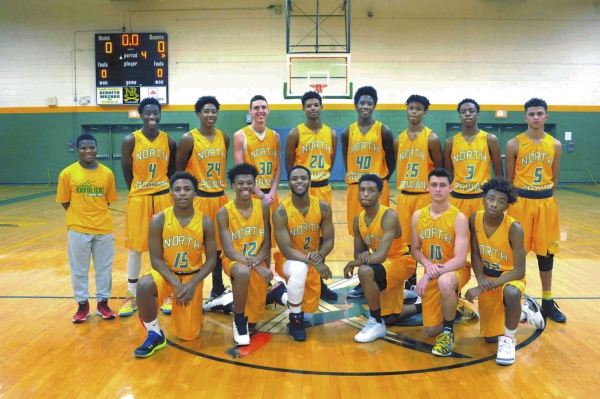 SPENCER — The stars will be on display at North Rowan this winter. It’s sixth-year coach Andrew Mitchell’s job to make sure they all align.
“I like the maturity level of this team,” Mitchell said. “They share the ball. They rebound. They play defense. In the past we’ve had teams where everyone wanted to be the leading scorer. This team likes to play together.”
That could spell trouble for the rest of the CCC. North returns eight lettermen and three starters from a club that went 19-7/9-1 last winter, shared the conference title with Lexington and came within a last-second misfire of reaching the 2A state semifinals. The future can’t happen soon enough for the Cavs.
“We’ve got a shot at something special,” Mitchell said.
It begins with senior Jalen Sanders, the best-of-show shooting guard who topped the county with a 17.8 scoring average last year. An all-conference pick and county player of the year, he begins this season with 1,140 career points — so you know he can finish. Mitchell is asking for more in 2015-16.
“We want him to get into the lane and get other players involved.” the coach said. “He’s such a strong guy with a solid build, he can do that.”
If Sanders is the king, teammate Joe Scott is the upstart eyeing the throne. Second-team all-county, the junior guard was somewhat deprived of touches last year.
“He’s gotten more aggressive,” Mitchell reported. “Now he gets his own touches. He’ll get three or four layups just by running the floor and making good decisions.”
North’s third returning starter is Josh Handy, a 6-4 senior forward who could emerge as the county’s premier rebounder. A tremendous leaper, he grabbed 14 rebounds in a recent scrimmage.
“Last year that wouldn’t have sat right with him,” Mitchell said. “Josh is capable of scoring 20 points any night, but he’s become more team-first than Josh-first.”
Forwards Alonzo Sirleaf (6-2 junior) and A.J. Shields (6-3 senior) round out North’s wrecking-ball front court. Sirleaf, a top-shelf football receiver, is dunking with ease.
“He was thinking about not playing basketball,” Mitchell said. “I had to go out and recruit him.”
Shields is a defense-first banger who enjoys playing within a system.
North’s wild card is senior Henderson Lentz, a 6-4 forward who suffered a near-fatal heart ailment last summer during team camp at Catawba’s Goodman Gym. He’s been fitted with an automated external defibrillator (AED) — a device that sends an electric shock to his heart to restore and maintain rhythm — and is expected back in time for the Christmas Tournament.
“He will be a welcomed addition,” said Mitchell. “He’s one of the few guys who can create his own shot. He feels like he can hit from anywhere.”
Of course, this isn’t a team without flaws. Mitchell wants to see more passing on offense and less reaching on defense. “The good teams in the playoffs, they take away your first two or three options,” he said. “We’ve got to be more patient with the ball, more aware. And defensively, we can’t be picking up six or seven fouls in the first quarter. That’s defensive discipline and maturity. That will make us better.”

Jalen Sanders, senior guard: As the Fresh Prince of Rowan County, his act needs no introduction. He’ll quarterback an offense that will rattle and burn with cohesion. A true leader from Day 1, no one outworks him.
Josh Handy, senior forward: A high-energy defensive whiz with big-league hops, he plays above the rim. Averaged 14.1 points per game last season and was first-team all-county, but he’s reinvented himself as a team player who accepts his role.
Joe Scott, junior guard: What’s not to like? A reliable penetrator, scorer and distributor — and an amiable teammate to boot. The spotlight will find him.
“If we need something done, he makes sure it gets done,” Mitchell said.