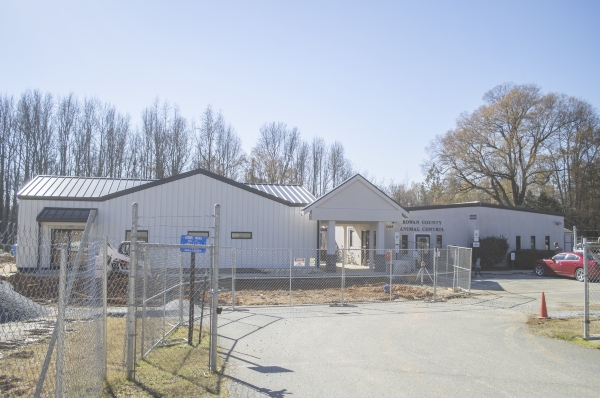 Josh Bergeron / Salisbury Post - With work on a cat wing at the Rowan County Animal Shelter nearing its end, nonprofit group Shelter Guardians has raised enough money to fund a new intake room at the facility.

A major expansion at the Rowan County Animal Shelter is nearly complete and another may not be far away.

Nonprofit group Shelter Guardians reached its fundraising goal late last month for an intake room at the shelter. It’s estimated to cost up to $90,000. Shelter Guardians Chairwoman Nina Dix said the addition would provide a consolidated area for dogs to be examined.

“We can’t look at the county and expect them to do everything, and people that care about animals are going to have to be the ones to come together,” Dix said. “There’s needs in schools and lots of things that all require money.”

Dix said Rowan County residents are responsible for the quality of the shelter.

“It’s our shelter and it represents what we think of animals in this county,” Dix said. “And, I don’t like what it says. It’s too small. It’s a quarter of the size of most shelters around us with the same intake. We can do better than that.”

The intake room is part of an effort named Project Canine. In addition to the intake room, Shelter Guardians hopes to add a dog wing, which would be significantly more expansive. The cost of a cat wing — currently under construction — has ballooned to more than $1 million. Like Project Canine, the cat wing isn’t paid for by county government.

Funds for Project Canine’s intake room were funded mostly through private donors. Dix said the Hurley-Trammel Foundation, Nancy and Bill Stanback and Ed and Susan Norvell make up about 85 percent of contributions. The remaining 15 percent came from fundraisers, Dix said.

Stivers said it is currently difficult to examine every animal with no centralized location for intakes. The cat wing will have a built-in intake room, but dogs would be left out, she said. In the room built by Shelter Guardians, Stivers said dogs could be given shots for parvo, distemper and bordetella.

Previously, Shelter Guardians provided money to pay for the vaccines. Now, the county has taken on the financial responsibility.

With a centralized location, Stivers said she’ll be able to catch every animal who is sick or injured. Currently, its difficult because animals don’t all come into the same location.

Next, Shelter Guardians will begin raising money for its proposed 63-kennel dog wing, which could be equally or more expensive than the cat wing. Shelter Guardians intends to pay for the dog wing’s construction too.

The two parts of Project Canine — the dog wing and intake room — would both be donated to Rowan County after construction.