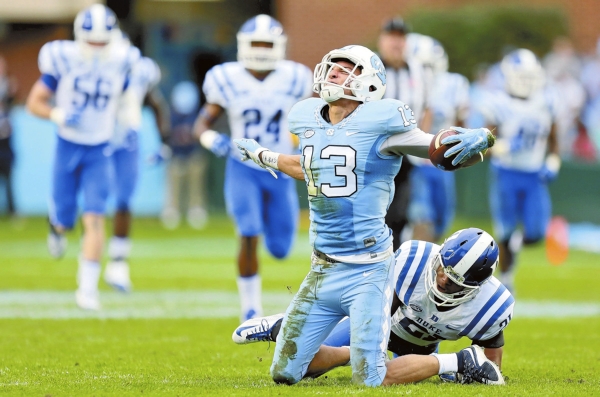 It follows nearly two decades marked by failed coaching stints and on-field struggles, along with long-running NCAA turmoil that led to sanctions and continues to hover over the school. But after an opening-night loss appearing to signal more ups and downs ahead, the Tar Heels have been rolling as they play No. 1 Clemson on Saturday night for their first ACC title since 1980.

“There’s always setbacks and always things you have to overcome, and probably more than I expected,” fourth-year coach Larry Fedora said. “But you still knew what the vision was. And maybe we had to change the way we were doing some things along the way, but everybody understood what we were doing and where we were going.”

Led by one of the nation’s top offenses and a revamped defense, the Tar Heels (11-1, 8-0 ACC, No. 10 CFP) have matched their season record for wins and own their first 8-0 ACC mark. They followed that turnover-marred loss to three-win South Carolina with their longest winning streak in more than a century, becoming only the fourth UNC team to win 11 games.

“I think Larry’s done a great job at North Carolina,” Clemson coach Dabo Swinney said. “He looks like he’s got them on the right track and they’re going be a challenge for us this weekend.”

The program had followed a winding road in the years since Mack Brown’s departure for Texas in 1997, the last time UNC won 11 games or appeared in the top 10 before now.

On top of that, they vacated all 16 wins from two of those seasons due to NCAA sanctions for improper benefits and academic misconduct in a case launched in 2010. And they missed going to the 2012 ACC title game in Fedora’s first season due to a postseason ban from that case.

Fedora coached against Brown’s Longhorns in the Big 12 while he was Oklahoma State’s offensive coordinator before becoming Southern Mississippi’s head coach, and consulted with Brown about the UNC job before taking it.

In an interview with The Associated Press, Brown said he told the “tough as nails” Fedora that UNC was “potentially not a good place but a great place to coach.” He also emphasized the hiring of former Auburn head coach Gene Chizik as defensive coordinator in UNC’s rise.

Chizik, Brown’s defensive coordinator when Texas won the 2005 national title, led the overhaul of a unit that allowed the most points and yards in school history last year. Now UNC has the nation’s 19th-ranked scoring defense (20.8 points) to go with the no-huddle offense that has put up big numbers throughout Fedora’s tenure and ranks 11th nationally (41.2 points).

“What Larry has done has put it all together,” said Brown, now an ESPN and ABC analyst. “With (Chizik) on defense and Larry on offense, it’s a great combination of two of the best coaches in the country. I think we’re seeing that on the field.”

The Tar Heels are still playing amid an NCAA investigation into an academic fraud scandal, an offshoot of the original case that has led to five more largely broad-based charges against the school. It’s been a constant obstacle in recruiting, and UNC only recently emerged from scholarship reductions Fedora inherited.

Several seniors have been here through most of that turmoil.

“You’re coming in and everything’s just going south,” fifth-year senior quarterback Marquise Williams said. “At first it’s like, ‘Man, is this program ever going to be anything special?’ . It’s really a dream come true for us.”