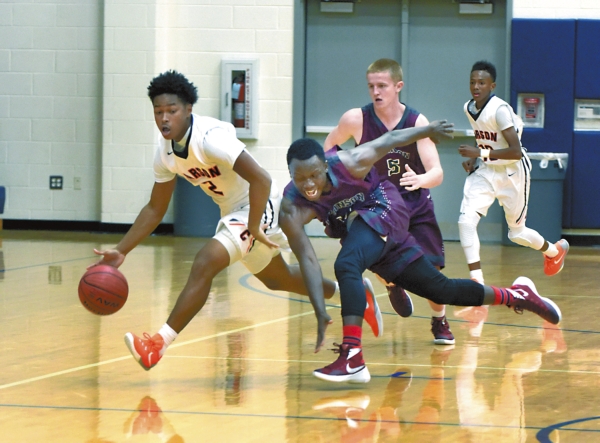 The visiting Bulldogs jumped to a huge first-quarter lead and never looked back until they had finished off the Cougars, 73-35, in boys high school basketball action.

“We’re a very young team and they’re a very good team,” coach Brian Perry said after Carson (3-2, 1-2 SPC) was routed. “They jumped on us early. They pounded us on the boards. They beat us in transition. We’re a little shell-shocked.”

“I’ve actually had some issues with my guys,” winning coach Lavar Batts Sr. explained. “Our last two games we’ve been bringing the energy in the third quarter and fourth quarter, but that’s too late. Tonight the emphasis was to pour it on right from the beginning.

Robinson poured it on like clam sauce on a plate of linguini. It scored the last 15 points of the first quarter to mount a 25-3 advantage. By halftime it was 47-14 and Carson looked like school boys who had wandered into the wrong classroom.

Carson made only two field goals in the first half and finished with just nine baskets. While the Bulldogs placed five scorers in double figures, Carson was paced by Cameron Prugh’s 12 points.

“There are so many things you can point to, but they’re one of the best teams in the state,” Perry said. “They’ve got the top junior in North Carolina in Lavar Batts (Jr.). He didn’t score a lot tonight but he made things happen. He got to the lane, dropped it off for other guys to score. As far as playmaking, he made some plays.”

It was teammate Coleman Trammell (12 points, 12 rebounds, a blocked shot) who put the game out of reach when he grabbed an offensive rebound and hit a put-back to give Robinson a 56-16 lead, midway through the third quarter. The remainder of the contest was played with a running clock.

“It was great for our sophomores and our freshmen to see that level of play,” Perry said. “We’re trying to prepare them to get to that point. It was a great learning experience for us — and a chance to get better.”