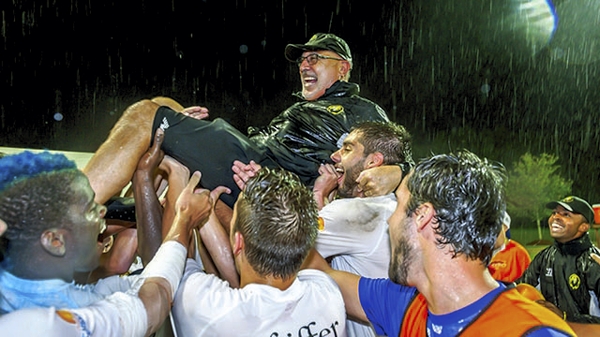 The Falcons take on Cal-Poly Pomona at 4 p.m. at Ashton Brosnaham Complex.

Pfeiffer, ranked No. 1 for most of the season, is 24-0 after defeating Charleston (W.Va.) in overtime on Thursday, 2-1, in the national semifinals. Cal-Poly beat Rockhurst (Mo.), 1-0, in the other game.

Regulation had ended at 1-1, after Charleston scored with just 1:38 left to play.

Regis had put Pfeiffer up, 1-0, in the first half with his 30th goal of the season.

For Pfeiffer coach Bob Reasso, he gets another chance to win a national championship.

Reasso led Rutgers to the 1990 NCAA Division I championship game, which the Scarlet Knights lost in penalty kicks to UCLA.

Now, Reasso will get another chance at winning it all when the Falcons battle Cal Poly Pomona (17-2-3).

“These opportunities come around so infrequently,” Reasso said. “I am lucky to have been in this position before. History is history. The only thing that really counts is tomorrow. I’ve got great players, a great community, a great school — I’m a very, very lucky man.”

Pfeiffer goalkeeper continued his perfect season against Charleston, with another brilliant performance, recording nine saves. Charleston outshot the Falcons, 20-10. Pfeiffer was able to take better advantage of their opportunities scoring on two of those 10 shots.

“I want to congratulate an absolutely fantastic Charleston team,” said Reasso. “I thought that on the whole they were the better team. They’re a veteran team, and we’re not; we have no seniors. I thought they did a great job of controlling possession. The one thing that we have in our program is we have goal scorers and we have heart. We found a way to win tonight (Thursday).”

In the other semifinal, the game was scoreless for 83 minutes until senior forward Alexander Turkson knocked in a goal for Cal-Poly on a corner kick opportunity. Eshel Chardon found Justyn Peeples, who delivered a header that Turkson booted into the back of the net.

Pfeiffer University Sports Information and NCAA.com contributed to this article.