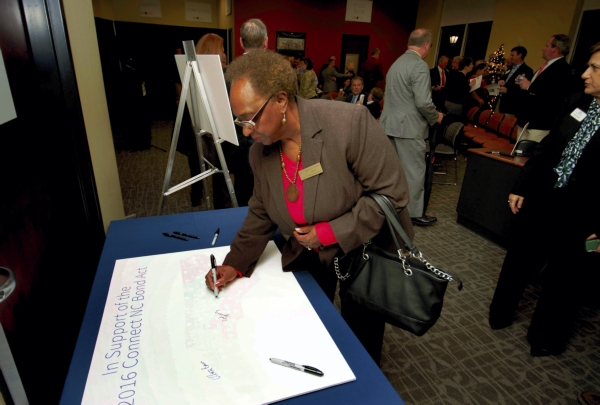 East Spencer Mayor Barbara Mallett signs a poster to support passage of the 2016 Connect NC Bond Act. Local and statewide goverment officials gathered Monday at the Rowan-Cabarrus Community College facility on the N.C. Research Campus to hear about the $2 billion bond referendum to upgrade the state’s infrastructure. If voters approve the bond in a March 15, 2016, referendum, RCCC stands to receive $7.2 million to upgrade and construct facilities. Jon C. Lakey/Salisbury Post KANNAPOLIS — The Rowan-Cabarrus Community College board of trustees hosted a kick-off event for the 2016 Connect NC Bond Act on Monday at the North Carolina Research Campus in Kannapolis.

University of North Carolina at Charlotte Chancellor Philip Dubois, coordinator of the regional effort to generate support for the act, presented information about the act to the attendees.

The bond package is for $2 billion. The money will go towards targeted, long-term investments and projects in 76 counties in the state, including projects concerning water and sewer, local parks, agriculture, the National Guard and public safety, state parks and zoos.

The act will not affect the state’s strong credit ratings, nor would it introduce new taxes or increase taxes, Dubois said.

“I think people assume that taking on state debt means their taxes are going to go up,” Dubois said. “In some cases that’s true, but it’s not true in this instance.”

Dubois said the state’s current tax revenue is enough to cover the debt on the bonds.

During the board of trustees meeting before the event, the board unanimously approved a resolution of support for the Connect NC Bond Act.

If the bond passes, RCCC will receive $7.2 million, which the school plans to use to upgrade and construct campus facilities.

“As the vice president of the college’s board of trustees, I know that the college’s faculty and staff will work strategically to utilize the funds they’re allocated to ensure they provide the very best services possible for the students in our local service region,” Vice Chairwoman Cynthia Mynatt said.

Mynatt also said the bond “can mean the difference in offering state-of-the-art learning experiences to our citizens, or simply to maintain the status quo.”

Greg Edds, chairman of the Rowan County Board of Commissioners, said the role of community colleges is becoming more important because of their ability to train skilled workers.

“(Community colleges) can become the driver of the local economy,” Edds said.

“I think the business case is an easy one, what’s not so easy is to get people to turn out in a March election, which is dominated by the presidential primaries,” Dubois said.

RCCC President Carol Spalding said while the attendees of Monday’s event may be on board, work needs to be done to convince others.

“I think this particular group is full of people who are thinking ahead, who see the value of it,” Spalding said. “Now we just have to convince some other people and also get them to the polls on March the 15th.”