The Claus come out: Barnhardts have house with 9,000 Santas 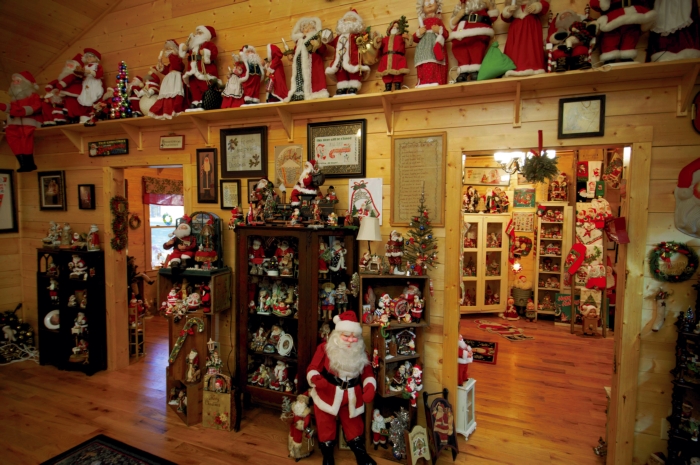 CONCORD — Driving across the rolling countryside of Cabarrus County, you think, “Santa must surely live here.”

And when you arrive at the home of Ron and Judy Barnhardt, you discover Santa really does live here — 9,000 Santas, to be exact.

The Barnhardts are Santa collectors extraordinaire, so much so that they’ve built a 1,000-square-foot house behind their home on Irish Potato Road. They’ll open Santaville on Dec. 5, 12 and 19 for tours. Hours are 10 a.m.-4 p.m. each day. Admission is free, with donations accepted for Hospice and Palliative Care of Cabarrus County.

“When it was insured, we had to have it inventoried,” she says. So she made a list — and checked it twice, of course.

This is the third year that the Barnhardts have opened their Santa House to benefit Hospice. And believe it or not, their collection is still growing.

“We’re always on the hunt,” Judy says. So much so, that she’s already asked Ron to add on to the cabin.

Judy became a Santa enthusiast a bit by accident. When she divorced her first husband in 1986, she says, “Sunday afternoons were a lonesome time for me.” But she started going to classes at a local craft store, where she painted a set of four resin Santas.

“Well, they turned out pretty good,” she says. “I gave them as Christmas presents. That’s when the obsession began.”

But she says, “It saved my life. If I had something to sit down and work on, I was OK.”

When she married Ron in 1990, he became her partner in, well, Santa collecting. Coincidentally, a friend at church, Bob Baucom, also had a Santa collection, and the two developed a friendly competition. Bob had 6,000 Santas, and when he died, Judy got a few pieces from his collection.

Stepping into the Barnhardts’ Santa House is like being on holiday overload. Literally, there are Santas everywhere you look. Two that are very special to Judy are the last two her parents, Carl and Floryne Misenheimer, gave her.

Carl had a country store, and Floryne worked for Coca-Cola. The couple collected Coca-Cola memorabilia, and Judy has all of their Santa Claus memorabilia. Santa Claus and Coca-Cola have become forever entwined in advertising over the years.

She’s got Old World Santas with fur-trimmed coats. She’s got Russian Santas from a trip to Alaska. She’s got Santas from many artists, including Pipka and Thomas Kincaid.

There are Santa advertisements, Santa Christmas albums, and prints on the walls from artists such as Brenda Harris Tustian.

She keeps one Santa under a glass dome because of its age. About 15 years ago, she got it from the owner of an antiques shop in Alabama, given to her at birth. At the time, the woman was 92.

She’s got Santa cookie jars and teapots and salt and pepper shakers and Mr. and Mrs. Santa Clauses, and moving Santas and Santa ornaments and Santas from CVS and Walgreens — only one per store, mind you. She’s even got an antique Santa pocketbook, for heaven’s sake!

If it seems like the perfect spot for a photograph with Santa, well it is. Santa Claus will be onsite during tour days, and for an additional donation, you may have your picture made with the jolly old elf himself.

Judy loves showing off the collection to preschoolers.

“They have been wonderful,” she says. “I think they’re overwhelmed.”

But, Judy says, the more people who come and visit, the more money she can give to Hospice. Her father had hospice care at home, but her mother was at the Tucker Hospice House for 11 days.

“They gave me the greatest gift,” says Judy, a semi-retired nurse. “I could be a daughter for those 11 days. I could never repay them for the care they gave and what they did for me.”

Next to the door, Judy has a collection of Santas with Baby Jesus. Those, she says, are a challenge to find. But, she says, “I still want our visitors to know what the real meaning of Christmas is.”

So does Judy still believe in Santa Claus?

“When you don’t believe,” it reads, “you get underwear.”

The Barnhardts live at 1288 Irish Potato Road. Their collection is also available for group tours by appointment, again with donations accepted to Hospice and Palliative Care of Cabarrus County. The Santa House is handicap accessible. To schedule a tour, contact Judy Barnhardt at 980-521-0523 or jmbarnhardt@carolina.rr.com.