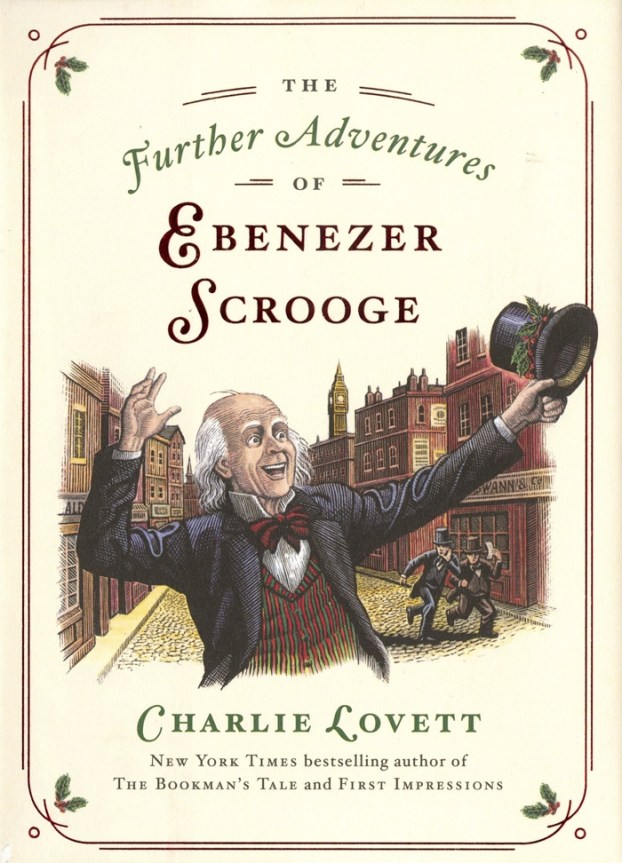 Make Christmas merry with 'The Further Adventures of Ebenezer Scrooge.'

What do you suppose happened to Ebenezer Scrooge after he made everyone merry with his conversion to kindness and generosity?

Charlie Lovett, a bestselling author who lives in Winston-Salem and England, decided more than a decade ago that it would be fun to write an homage to Dickens and his Christmas spirit by taking Scrooge 20 years out of his vow to keep Christmas in his heart.

Lovett’s manuscript sat in limbo for a decade. No one was interested. But as his first book, “The Bookman’s Tale,” and his second, “First Impressions,” gained critical and popular acclaim, this little volume became very interesting to his publishers at Viking.

And so, for Christmas 2015, “The Further Adventures of Ebenezer Scrooge” sparkled to life, with a tale of goodness taken a step further.

Lovett had promised readers at this year’s Summer Reading Challenge, where “First Impressions” was featured, that the book would be out at just the right time.

Perfectly mimicking Dickens’ language, Lovett sets out to tell of Scrooge’s attempt to pay it forward, as it were, by helping Old Marley get rid of some of his chains.

For it was not enough that Marley redeemed Scrooge; he still bears the weight of the chains of his former miserly life.

Marley and Scrooge have regular visits, and it is during one of those visits that Scrooge is shocked to learn how much effort is required for poor Marley to finally rest.

He devises a plan to help still more people through Marley’s assistance with the spirit world.

The gentle reader will come to see that Bob Crachit, 20 years a partner in the firm, has become rather obsessed with his work and tends to neglect his family, especially Tim’s young son.

And it turns out frivolous nephew Freddie has buckled down in his work at Whitehall, for the government, to the point he’s forgotten where his success came from.

The bankers who once asked Scrooge for donations for the poor have seen money grow by leaps and bounds, while Scrooge’s account has withered away with his generous good works.

His uncovered cheques (checks to you and me) have the bankers scowling.

Ebenezer, who at all times of the year wishes people a Merry Christmas, much to their annoyance, sees a ripe opportunity to loose some of the links in Marley’s chain and promote his own unrelenting goodwill.

And so, on a sweltering June day that reminds no one of Christmas, he requests Marley’s help in procuring the three spirits again, for one night with Scrooge’s chosen subjects — Bob Cratchit, Freddie and the bankers, Mr. Portly and Mr. Pleasant (he can’t remember their names).

Lovett’s imagination works well here, and there is a strong current of social justice, inspired by Dickens himself, whose writings were often an exposure of the desperate conditions of the poor or mentally ill, those people whom society had chosen to throw into dungeons or work to death in filthy factories.

So, in addition to an uplifting Christmas story full of warmth and hope for the future, you’ll be getting a history lesson and a call for social justice.

Douglas Smith illustrated the cover and contributed charming pen-and-ink drawings at the beginning of each stave, making this little book even more reminiscent of the original.

Readers will be reunited with the ghosts of Christmas past, present and future, and the future is still a very scary spirit, indeed.

Scrooge’s charges will be duly scared into the realization that they have not carried their benefactor’s message forward as they should, and Old Marley, well, you have to read about that.

And what happens to Ebenezer? Well, “it was always said of him, that he knew how to keep Christmas well, if any man alive possessed the knowledge.”