All over Rowan, a day to give thanks for what matters most 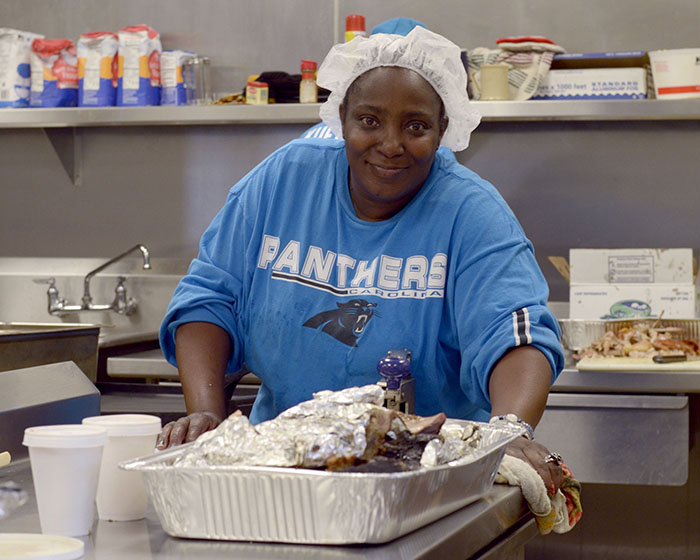 Hugh Fisher/For the Salisbury Post Terry Cuthbertson, of Salisbury, volunteered at Rowan Helping Ministries on Thanksgiving Day. Eight months after she was accidentally hit by an SUV that crashed through the front of the store she was in, Cuthbertson said she's thankful to be alive and well.

“What are you thankful for on Thanksgiving Day?”

For Terry Cuthbertson, of Salisbury, this wasn’t a difficult question to answer.

“I’m thankful to be alive,” she said.

Eight months ago, on March 24, Cuthbertson was injured when a driver accidentally ran through the front of Innes Street Drug in downtown Salisbury.

Cuthbertson was pinned between the SUV and a store shelf. She was transported to a nearby hospital, but wasn’t seriously injured.

On Thanksgiving Day, she was volunteering at Rowan Helping Ministries with fellow members of Shady Grove Baptist Church from Bear Poplar.

About 11 a.m., a home-cooking smell was wafting through the dining room of the charity’s downtown homeless shelter.

Cuthbertson was right in the midst of it, working to finish preparing a Thanksgiving feast for an estimated 130 needy people.

For Cuthbertson, volunteering is not just something to do on Thanksgiving. She said she’s volunteered on her own at Rowan Helping Ministries on a number of occasions.

“I thought about it this morning and it’s been eight months since that wreck,” Cuthbertson said. “So I’m really thankful to be here.”

Outside the building in the morning sun, a group of men and women were talking, sharing stories and news. Some were waiting for out-of-town family to come pick them up.  Others were enjoying time with others.

What did they give thanks for on Thanksgiving Day?

“Every day is Thanksgiving, as long as you can get up, as long as the Lord blesses you to get up and get around,” said James Faggart, a native of Kannapolis.

Another man sitting nearby said the same was true for him. Ronnie Ransbottom, a native of New Orleans, said he came to Salisbury about 15 days ago for treatment at the Hefner VA Medical Center.

Life isn’t easy, Ransbottom said. Sitting outside in the shade at a picnic table, he told his life’s story. “I was an ironworker, but I got spinal meningitis,” he said. “Now, I’m fighting cancer and cirrhosis of the liver.”

“I’m not bitter,” Ransbottom added. “Look at the little kids who’ve got leukemia. They don’t live to be 10 years old. I didn’t live a productive life.”

When his brother passed away a month ago, Ransbottom said, “I wanted to end my life.”

A visit to a local church a few weeks later changed everything. “As soon as the choir started singing and praising, I cried like a baby. And I don’t like to cry.”

What was Ransbottom thankful for on Thanksgiving?

Family near and far

“It hasn’t been too bad,” said Rankin, who said she’d celebrate Thanksgiving with her family in Salisbury later that day after her shift.

David and Lynne Joyce, of Brevard, came in to pick up a case of bottled water and some butter to finish off their Thanksgiving meal.

“The turkey’s in the oven right now, and the banana pudding and the strawberry princess salad are ready!” Lynne said.

The Joyces were in town to visit Lynne’s family. Her father, Boyce Caudle, was formerly principal of East Rowan High School.

David, president of Brevard College, said they’re used to traveling for the holidays. “We’ve always had Thanksgiving with the family,” he said. “Our family is everywhere, so we try to make it special, wherever they are.”

With a daughter and two grandchildren in France, he said, sometimes that’s difficult.

But it’s always something to look forward to, he said. “It makes the celebration last longer,” he said.

On Thanksgiving Day, the department had responded to seven calls as of 7 p.m., firefighters said.

For Justin Nelson, who works part-time as a firefighter at Bostian Heights, Thanksgiving was both a workday and a day to celebrate with family.

Nelson and firefighter Joseph Evans, who also works part-time at Bostian Heights, split the 24-hour Thanksgiving shift so each man could spend time with his loved ones.

Both men also have jobs elsewhere: Nelson is a law enforcement officer and Evans is a firefighter.

“It’s amazing to see the outpouring of support the fire department gets,” Nelson said, telling about how he worked curb service during the morning’s fundraiser.

What did they say they were thankful for on Thanksgiving?

Also, Evans said, “the best turkey in the county!” – cooked by the Bostian Heights firefighters, of course.

The firefighters settled in to watch the Carolina Panthers face off against the Dallas Cowboys on TV.

Outside, the moon was rising at the end of a day that saw families and friends gathering, people working and folks helping one another – all with something big or small for which to be thankful.